Brett D. Heffes, chief executive officer, stated, “The first quarter of the year was highlighted by continued positive trends in our franchising business. Our improved operating results combined with a decrease in tax expense due to the reduction in corporate tax rates yielded exceptionally strong growth in earnings per share.”

Founded in 1988, Play It Again Sports stores buy, sell, trade and consign used and new sporting goods, equipment and accessories for a variety of athletic activities, including team sports (baseball/softball, hockey, football, lacrosse, soccer), fitness, ski/snowboard and golf, among others. It closed the year with 476 stores, opening 14 locations and closing six. Twenty-six locations were up for renewal at the year’s close.

At March 31, Winmark had 1,223 franchises in operation under the brands Plato’s Closet, Once Upon A Child, Play It Again Sports, Style Encore and Music Go Round. An additional 59 retail franchises have been awarded but are not open. In addition, on March 31, 2018, the company had a lease portfolio of $41.9 million. 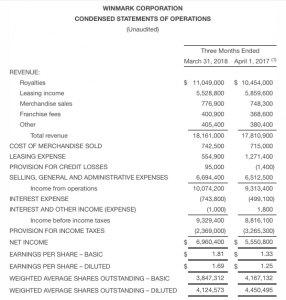 REI Names Smith Optics Vendor Partner of the Year for 2009