Patagonia has joined Nike and Adidas to become the latest athletic apparel brand to invest in water saving textile technology.

Patagonia made the undisclosed investment through its $20 Million & Change fund, which it launched in 2013 to help startup companies commercialize solutions to the environmental crisis in the clothing, food, water, energy and waste industries. The investment caps a Series A round of investment for CO2Nexus, which is based in Denver.

“Quite simply, processing textiles and apparel requires huge amounts of energy and water  and both are in crisis,” said Patagonia CEO Rose Marcario. “CO2Nexus is a great fit for $20 Million & Change  it’s a young company using business and innovation to bring about positive benefits to the environment. Patagonia is proud to invest in their success.”

Tersus is based on technology developed by FeyeCon, a Dutch company that has spun off several ventures to commercialize its CO2 technology. In late 2012, for instance, Nike announced it had invested in FeyeCon affiliate DyeCoo Textile Systems BV to commercialize a waterless dye technology. In December, 2013, Nike Chief Operating Officer Eric Sprunk flew to Taiwan to open the first DyeCoo-equipped dye facility in the world. Nike is marketing the process it uses – which reduces dyeing times by 40 percent, energy use by 60 percent and space requirements by a quarter  as “ColorDry.”

Adidas announced in December, 2013 that it had invested about $2 million in Crailar Technologies Inc., a Canadian company that makes natural fibers from plants such as hemp that require much less water and pesticides to cultivate and process than cotton. 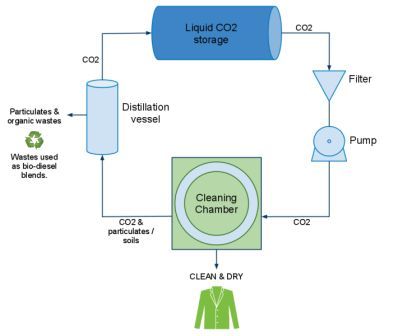 Tersus reduces water, chemical and electrical use and waste production significantly. Over the course of repeated washes, other benefits include down loft enhancement, water repellency, and color/size/fit consistency. The technology can be scaled for used by apparel manufacturers or commercial and institutional laundries. Users can choose to recycle the CO2 after removing impurities that can then be burned as bio diesel, as shown in the C02Nexus diagram to the right.

“Patagonia is the perfect partner for us, and for our technology,” said Kinsman. “Their leadership and track record in both textile technology and environmental arenas is unparalleled. We are excited about the opportunities we can jointly pursue up and down the textile value chain.”

Traditional textile processing methods are extremely water and energy intensive, consuming up to 100 gallons of water or more for every pound of textile processed, according to industry analysis. That translates to hundreds of billions of gallons of water in the U.S. alone, and trillions worldwide. Moreover, most textile processing today is concentrated today in regions globally where water quality is low, which puts even greater strain on already scarce drinking water supplies.

While many brand apparel companies have made great progress in reducing water consumption, gains thus far have been largely incremental, CO2Nexus President & CEO Richard Kinsman wrote in an email to The B.O.S.S. Report. Investments by Patagonia, Nike and Adidas represent the very earliest steps in a massive transformation of the textile supply chain away from water based processing.

“Part of the problem is water pricing, which overall is completely disconnected to market forces of scarcity, quality etc.,” Kinsman said. ” Part of the issue has just been lack of a true real substitute for water, and then just plain institutional inertia; it is not a simple matter to change the way things have been done for decades and decades.”

Change, however, is coming. Last year, environmental authorities in China shut down several dye plants as part of a crack down on the country’s worst water polluters and the Chinese government is overhauling what it has described as deeply flawed state pricing structures for water, electricity and natural gas to address growing scarcity. Those reforms are expected to lead to higher prices in many Chinese cities in coming years.

The challenge for the textile industry is to create process technologies that can meet specs using relatively inexpensive and inexhaustible inputs, can be supported on a global scale and reduce pollution.

“It is a pretty high bar to clear,” said Kinsman. “CO2 fits those criteria and I am not sure what else does. It takes leaders like Patagonia to set examples and be first movers, which sets things in motion for others to adopt. With Patagonia, Nike, Adidas all embracing CO2, eventually we believe that momentum will simply enable others to join and this will become the de-facto next standard.” 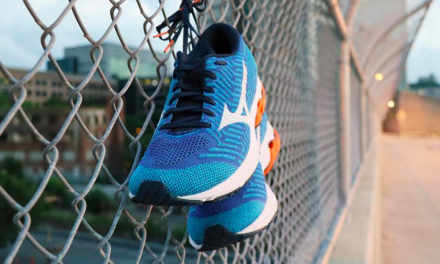 Mizuno’s Profits Slide In Half