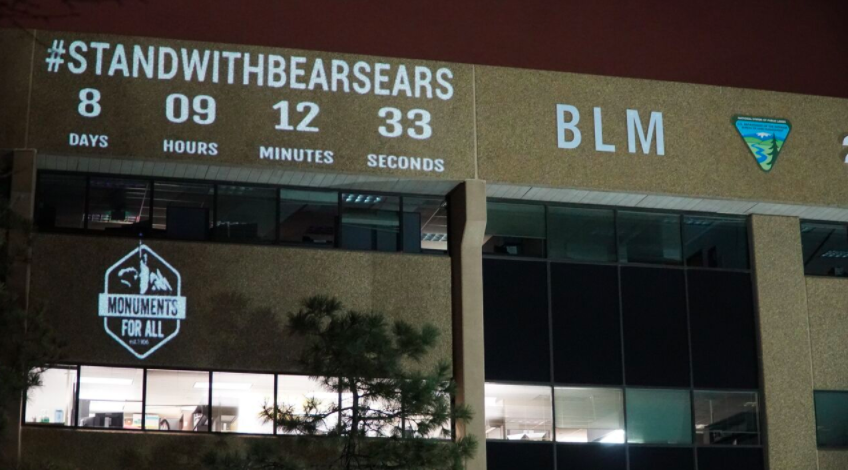 On Wednesday night, Patagonia joined with conservation organizations to project a countdown clock on the Bureau of Land Management headquarters in Lakewood, Colorado in protest of President Trump’s sell-out of national monuments to mining and drilling interests. Another projection took place earlier in the evening at the McNichols Civic Center Building for the kick-off of the Outdoor Retailer + Snow Show.

President Trump’s recent removal of more than two million acres of Bears Ears and Grand Staircase-Escalante national monuments amounts to the largest elimination of protected areas in U.S. history. Included in his proclamations were provisions that allow for private companies, such as Denver-based Energy Fuels, to begin staking mining and drilling claims in the areas cut from the monuments within 60 days.

The countdown clock projection was designed to raise awareness that, on February 2 at 9 a.m. EST, the Trump Administration, through the Bureau of Lands Management, will give the extractive industry privileged access to drill and mine areas that are sacred to Native American nations, home to key wildlife habitat, and hubs of outdoor recreation opportunities.

The action, put on by Patagonia, Conservation Lands Foundation, The Wilderness Society and Center for American Progress, took place on the eve of the Outdoor Retailer show’s debut in Denver. After 20 years of the bi-annual show taking place in Salt Lake City, Utah, organizers and industry members moved the $45 million event because of efforts by Utah’s officials to weaken protections for public lands, including national monuments.

As Utah’s national monuments face imminent harm in a matter of days, there are additional public lands and waters in the Trump Administration’s crosshairs, from allowing logging in Maine’s Katahdin Woods & Waters to commercial fishing in the Pacific Remote Islands. Yesterday’s action aims to raise awareness not only of the attacks on national monuments in Utah, but on all the public lands across the country that belong to all Americans.

Photos and videos of the countdown clock projection are available here.