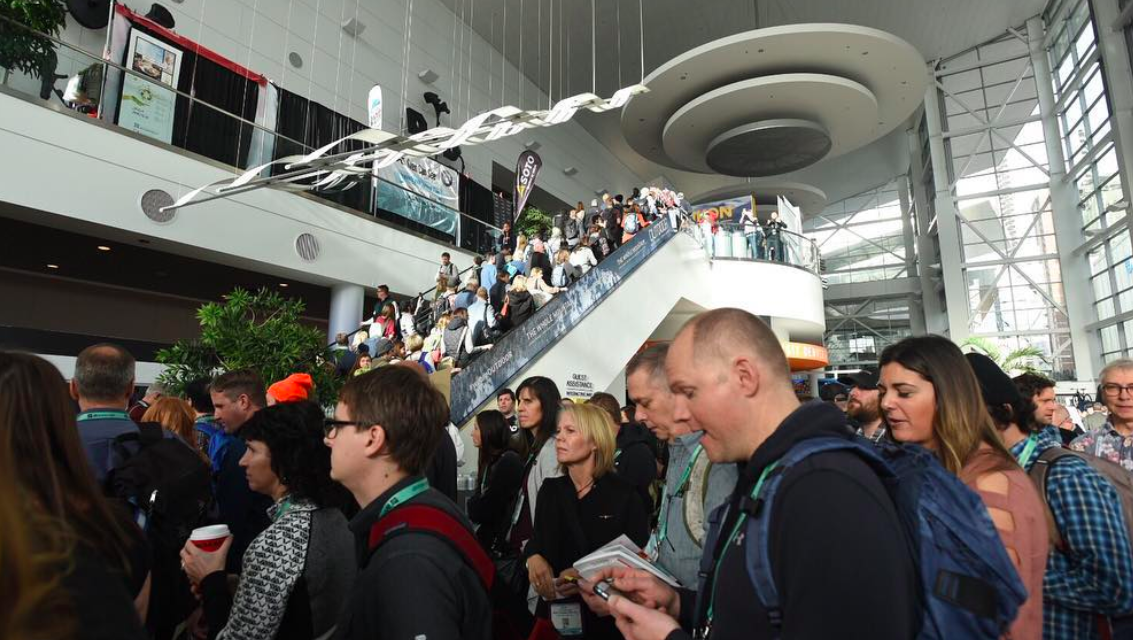 With packed aisles, the inaugural Outdoor Retailer + Snow Show made its long-awaited debut on Thursday.

“2017 was wild. 2018 is our new beginning,” said Marisa Nicholson, show director for Outdoor Retailer Thursday morning at the annual OIA Industry Breakfast. “The beginning of a more unified industry as we welcome our friends from the snow sports industry.”

Describing the three-level show as “huge,” Nicholson said more than 11,000 retail buyers had registered for the show, more than 1,000 working media had registered and more than 1,000 brands signed on as exhibitors. Bringing all the groups together involved in outdoor recreation, also including non-profits, athletes and influencers, “creates gravity, and gravity creates change for the outdoors.”

Nicholson added, “This is your opportunity to create the change you want to see, the changes in your business, your community and your industry.”

The event was previously held in Salt Lake City, but organizers opted to move the festivities to Colorado, citing concerns that government officials in Utah were in support of selling off public lands. On Wednesday night, Patagonia joined with conservation organizations to project a countdown clock on the Bureau of Land Management headquarters in Lakewood, CO in protest of President Trump’s order to significantly reduce Bears Ears and Grand Staircase-Escalante national monuments.

“The beer is stronger, the peaks are taller and the recreation is higher,” Maria Handley, of Conservation Colorado, said at the rally.

“The Outdoor Retailer’s move to Denver represents a real alignment for our industry,” said Travis Campbell. OIA board chairman, at the breakfast meeting. “Now our home truly represents our outdoor recreation values, not just in words but in actions.”

Many feel joining the two shows will help both OIA and SIA in their other efforts to expand participation and even drive business.

“It’s sort of like being in a wedding right?” said Colorado Gov. John Hickenlooper at the breakfast meeting. “Two organizations coming together. There two few things as strong in life as unity.”

He noted that prior to becoming governor, his business career involving establishing a number of brew pubs across the Midwest and West. The craft brewing industry at the time had two organizations: the Craft Brewers Of America, represented by bigger players such as Sierra Nevada and Sam Adams, and the American Brewers Association, originally the American Home Brewers Association representing smaller brewers.

“Those two organizations, they were similar; they were close but they weren’t unified,” stated Hickenlooper, who was formerly chair of the American Brewers Association. Around the turn of the century, the two organizations merged and the craft beer industry has since thrived.

“If you look at the growth of the craft beer industry since that happened, it is astounding,” said Hickenlooper. “It’s now over 6,000 craft breweries in the United States. And I think that unity is a big part.”

The governor added, “So what you’re doing here I believe will lead to dramatic spurt of growth for everybody, for both organizations, for everybody here, for the entire outdoor recreation industry… You still have two different organizations but they are now working in harmony.”

Nick Sargent, president of Snowsports Industries of America (SIA), noted that he began talking with Amy Roberts, executive director the Outdoor Industry Association, about consolidating the shows shortly after he took over SIA two years.

“Our vision is simple,” said Sargent. “We’re driving more people around the globe to participate in winter sports. And there’s no better place to do that that right here in Colorado.”

But he also said he was “absolutely clear” that the vision of expanding winter sports couldn’t only be accomplished by the efforts of SIA vendor members but also needed collaboration with resorts, retailers, states like Colorado, non-profits and a number of others supporting the outdoor recreation space.

“Our commitment is to support our members and promote participation in winter sports,” said Sargent. “We can’t do it alone.”

For her part, Roberts particularly talked up how a united front would help manage the heightened political challenges facing the outdoor recreation space.

“The outdoor industry stepped up time and time again last year when it really mattered and you did face many challenges,” said Roberts to the audience of show attendees. “In 2017, we saw protections for public lands rolled back, efforts to combat climate change were dismissed and budgets were proposed that would reduce spending and support for our public land systems.”

But she was encouraged to see “our industry and state and local retailers step up to fill the void, and I think we’re going to see more of that in 2018.”

Roberts also noted that voters at the state and local level supported initiatives that led to $1 billion in new funding across the country to support parks and trails. When the national government backed out of the Paris Climate Agreement, more than 2,000  governors, mayors and businesses pledged “We’re Still In” to indicate their steadfast commitment to reducing carbon emissions.

Finally, boosted by countless industry-driven efforts, millions of comments were generated in support of public lands. Roberts stated, “So many companies in this room, including our own Outdoor Foundation, donated millions of dollars and did so much work to ensure that kids can continue to get outside.”

For 2018, OIA is launching a voter education project as 2017 “showed us that we need more people to vote for the outdoors.” It’s also introducing the “Together We Are a Force” awards in recognition of collaborative work, particularly those between competitors, that drive innovation or “meaningful change.” Numerous programs are being planned around sustainability, climate and other public advocacy initiatives.

Said Roberts, “We know we need to continue efforts to convince a new generation of Americans to head to the outdoors, both for the health and wellness benefits of going outside, but also to inspire new Americans to care for the welfare of our public lands.”

On a video, Denver’s mayor, Michael Hancock, called it an “honor” to be selected as the partner of the combined show, and said Denver’s optimistic and entrepreneurial spirit with “the Rockies” as its playground is a good match the outdoor recreation industry.

“The outdoor industry is filled with that same innovative, entrepreneurial and pioneering spirit so this is a natural fit,” said Hancock. “The outdoor industry is a powerhouse, not only economically but politically. The $28 billion impact of your industry is truly impressive and the work you’ve done to call attention to the value of our public lands is just as important. We need your voice and involvement to continue on this.”

Campbell, a new resident of Colorado given his appointment to run Smartwool, introduced Hickenlooper and highlighted his move in 2015 to establish the Colorado Outdoor Recreation Industry Office “in recognition of the huge importance and impact of the industry on the future prosperity and health of Colorado.” The office has become a key contact spot for advocacy and resources supporting the outdoors for the state.

In 2015, Hickenlooper introduced the “Colorado the Beautiful” initiative to encourage participation in the outdoors with a goal that within a generation every Coloradoan will live within 10 minutes of a park, trail or vibrant green space. Said Campbell, “This program demonstrated why Colorado puts high value on broad aspects of the outdoors because it translates to physical and mental health as well an economic benefits to the state.”

Finally, Hickenlooper heard a round of applause from the audience after noting that Hickenlooper signed an executive order last July indicating the state would still commit to the Paris Climate Agreement despite the U.S. government’s move to exit the agreement. Among other things, the order pledges to reduce greenhouse gas emissions by 26 percent by 2025 as compared to 2005 numbers.

Hickenlooper thanked all the participants involved in bringing the two shows together and their efforts to overcome many hurdles. He also stressed that Colorado is committed to the outdoor recreation industry.

“We will make the strongest advocate, the best partner you could ever have in state government,” he said, also vowing to continue to “ramp up” efforts to support outdoor recreation in the state.

His one piece of advice, however, was to get politically involved, encouraging the audience to either run themselves or encourage and support others and ultimately “take the values of the outdoor recreation industry, clean water, clean air, public lands and access to those public lands for everyone. Take those core values and start talking about them in that local political soup that we all live in.”

He noted the significant accomplishments Ken Gart, a businessman who in the past ran Gart Bros. Sporting Goods and Sports Specialty Ventures, has made in establishing bike trails in the state. Gart still gets paid $1 salary as the Colorado’s “bike czar.” With the many issues facing the industry, Hickenlooper promised those in the audience would be invigorated by the political process.

He stated, “This last year we saw the outdoor industry flex its muscle to demonstrate that you are going to be a force for making this country better and greater. So thank you so much putting your heart and soul into something so important.”