Oboz announced it is a major sponsor of the Banff Mountain Film and Book Festival’s 2016 Radical Reels Tour.   Additionally, Oboz is the presenting sponsor of the Radical Reels People’s Choice Award, which will be granted on November 8th to the most popular of the new high adrenaline outdoor action films debuting at the Banff Mountain Film and Book Festival.

Inspired by the excitement of the Banff Mountain Film and Book Festival-now in its 40th year-the Festival presents the wildly popular Radical Reels night-a presentation made up of short, action-packed climbing, paddling, mountain biking, BASE jumping, skiing, snowboarding, and other films.

This year, on November 3rd, climber and filmmaker Cedar Wright will emcee the highlight evening, which has become a Banff tradition and a crowd pleaser with wacky antics, outrageous stunts and feats shown on a massive screen.

On November 8th, the audience will amp up the applause-o-meter to vote for the winning Radical Reels Film-the People’s Choice Award.  Josh Fairchilds, Vice President and co-founder of Oboz, will present the award.    Last year’s pick was Sufferfest 2: Desert Alpine, by Cedar Wright. The film told the tale of his and Alex Honnold’s month-long bike and climbing adventures and misadventures around the Southwest United States.

Then, the 2016 Radical Reel Tour takes to the road, as it has since 2004, with a selection of films that were screened in Banff. The Radical Reels Tour annually visits more than 65 locations across North America, as well as internationally.  Many of the screenings, hosted by local organizations, benefit not-for-profit and community organizations.  More information on the current 2015 Radical Reels Tour as well as the future 2016 calendar and screening locations can be found on http://www.banffcentre.ca/mountainfestival/worldtour/radicalreels/. 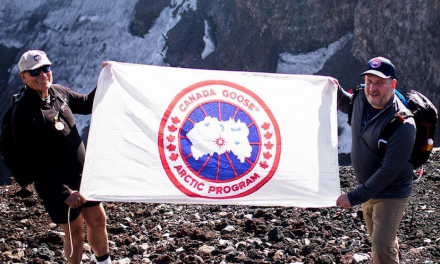