“Each of our international markets posted double-digit net sales increases, with the exception of a modest decline in Europe. Our apparel and accessories, prescription eyewear, and OAKLEY THUMP contributed to solid newer category sales growth during the second quarter. Gross margins improved across virtually all product categories and these increases in sales and gross margins led to a robust 27.3% net income increase.

“We have great momentum at the halfway point of 2005 and look forward to the second-half delivery of our expanded apparel and accessories line, fall prescription frame collection, continued contribution from new sunglass releases and the launch of RAZRWIRE – the world's first Bluetooth-enabled sunglass developed jointly by Oakley and Motorola.'”

Newcomb concluded, “We now expect earnings per share growth at the higher end of an increased range of 25% to 30% over 2004 and continue to expect full year 2005 net sales growth in the upper end of our previously issued guidance of 10% to 15%.”

Combined second quarter gross sales of the company's newer categories, consisting of apparel and accessories, prescription eyewear, electronics, footwear and watches, grew 24.7% to $50.0 million. These sales accounted for 26.9% of total second quarter gross sales and were driven by strong increases in the company's spring apparel and accessories lines and prescription eyewear, together with the benefit of OAKLEY THUMP, the world's first fully integrated, digital audio eyewear.

Second quarter operating expenses totaled $71.7 million, up 11.7% from last year's second quarter, and represented 42.0% of net sales, compared with 41.7% of net sales in the comparable quarter. The tax rate for the second quarter was 31.5%, reflecting the benefit of an income tax refund related to amended prior period California state income tax returns. The company expects a tax rate of approximately 34% on its income for the remainder of 2005.

The company's order backlog as of June 30, 2005 was $82.1 million, up 10.3% compared with $74.4 million at the same time last year. The backlog reflects significant incremental new orders for electronics products, significant increases in sunglass and goggles orders and a modest increase in apparel orders, partially offset by a decline in footwear orders. The increase in sunglass backlog was achieved despite a $1.3 million decline in sunglass backorders compared with one year ago, reflecting better execution by the company in delivering new sunglass styles this year.

The company's revised guidance for 2005 projects full year earnings growth over 2004 to be in the high end of an increased range of 25% to 30%, up from previous guidance of 15% to 20% growth announced on April 20, and full-year net sales growth at the upper end of its previous guidance of 10% to 15%. This net sales guidance assumes a mid to high single-digit increase in sunglass sales combined with an approximate 20 to 25 percent increase in the company's newer category sales for the year and also reflects management's current plans to continue expanding its retail locations. 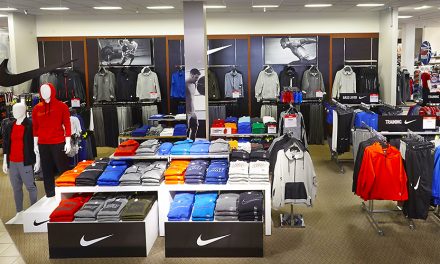