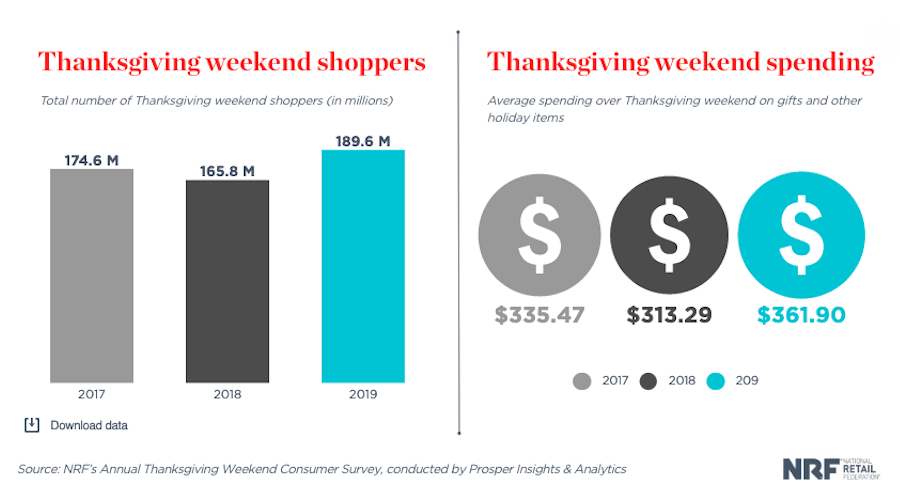 “Americans continue to start their holiday shopping earlier in the year, and Thanksgiving is still a critical weekend for millions,” NRF President and CEO Matthew Shay said. “Whether they’re looking for something unique on Main Street, making a trip to the store or searching for the best deals from their mobile device, this is when shoppers shift into high gear. With the condensed holiday season, consumers are feeling the pressure to get their shopping done in time. Even those who typically wait until the last minute to purchase gifts turned out in record numbers all weekend long.”

The survey found that 124 million people shopped in stores while 142.2 million shopped on retailers’ websites; demonstrating today’s seamless shopping world, 75.7 million did both. Consumers who shopped in both channels spent an average $366.79, spending at least 25 percent more than those who shopped in only one or the other.

For the first time, Black Friday topped Cyber Monday as the busiest day for online at 93.2 million shoppers compared with 83.3 million. Saturday followed at 58.2 million, Thanksgiving Day at 49.7 million and Sunday at 43.1 million.

Thirty-nine percent of consumers looked to emails from retailers for information on deals and promotions, edging out conventional advertising circulars, which were tied with online search at 38 percent. Mobile devices played a significant role, used by 75 percent to research products, compare prices or make purchases, up from 66 percent last year.

“The growth in online retail sales is a tide that lifts everybody,” Prosper Executive Vice President of Strategy Phil Rist said. “When consumers are buying from retailers online but picking up or making returns in-store, it is more and more difficult to distinguish between the sales retailers make in their stores and the ones they make on their websites.”

On average, consumers had completed 52 percent of their shopping, up from 44 percent during the same weekend last year, although Thanksgiving came six days earlier in 2018. The survey found only 39 percent of shoppers believe deals seen over the Thanksgiving weekend will get better throughout the rest of the season.

The popularity of Thanksgiving weekend shopping continues even as earlier NRF surveys found that 56 percent said they had already started as of the first week of November.

NRF defines the holiday season as November 1 through December 31 and has forecast that sales will total between $727.9 and $730.7 billion. Consumers expect to spend an average $1,047.83 – including purchases made earlier – for an increase of 4 percent over last year, according to NRF’s annual survey released in October.

The survey of 6,746 adult consumers was conducted last Wednesday through this Monday and has a margin of error of plus or minus 1.2 percentage points.