American adults are expected to spend an average $81.17 for a total of $15.3 billion as an estimated 188.5 million people watch the New England Patriots take on the Philadelphia Eagles in the Super Bowl next month, according to the annual survey released by National Retail Federation and Prosper Insights & Analytics.

Projected viewership is the same as last year, but total spending is up 8.5 percent from $14.1 billion in 2017.

“Whether throwing their own party, heading to a friend’s house or gathering at their favorite bar or restaurant, consumers are ready to spend on the big game,” NRF president and CEO Matthew Shay said. “Super Bowl shoppers will find retailers well-stocked on decorations, apparel, food and all other necessities to cheer on their favorite team.” 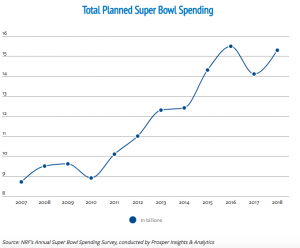 Of the 76 percent of those surveyed who plan to watch the game, 82 percent say they will purchase food and beverages—up slightly from 80 percent last year—and the highest in the survey’s history. Another 11 percent will buy team apparel or accessories, unchanged from 2017. New televisions and decorations hold a similar draw for those planning to watch at home, with eight percent planning to purchase each, also unchanged. Those 25-34 will spend the most of any age group at an average of $118.43.

“Consumers are carrying strong spending momentum from the holiday season into their Super Bowl festivities,” Prosper executive vice president of strategy Phil Rist said. “This is evident through increased plans for purchasing while the number of viewers remain steady with last year. Fans aren’t afraid to spend a few extra dollars to make this year’s game the best one yet.”

The survey, which asked 7,277 consumers about their Super Bowl plans, was conducted January 3-10 and has a margin of error of plus or minus 1.1 percentage points.

Revo Steps up to Sponsor Climbing for Cancer Fundraiser