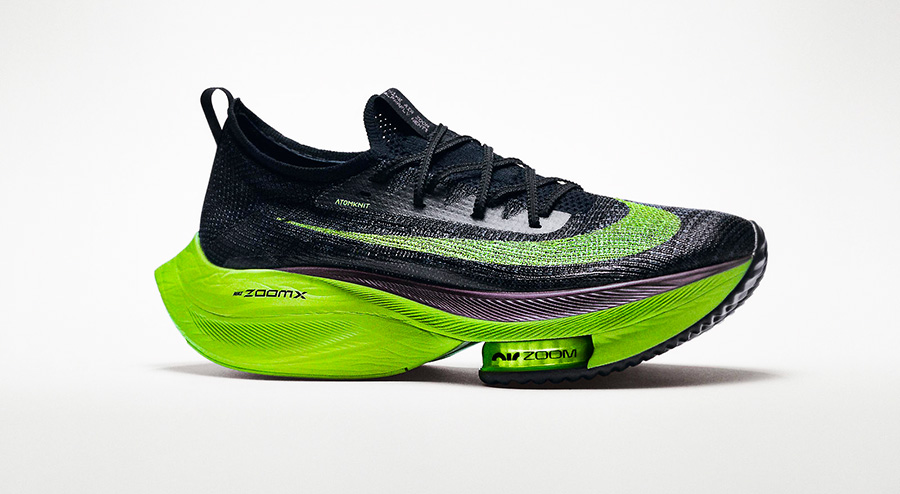 Nike stirred controversy once again with Wednesday’s drop of the Air Zoom Alphafly Next%. Days following the World Athletics opting not to ban Nike’s Vaporfly running shoes, the latest running shoe “evolves the learnings of the Vaporfly franchise, adding Zoom Air Pods in the forefoot, more ZoomX Foam in the heel and a lighter Atomknit upper,” said Nike.

“The groundbreaking research that led to the original Vaporfly unlocked an entirely new way of thinking about marathon shoes,” said Carrie Dimoff, an elite marathoner and member of Nike’s Advanced Innovation Team. “Once we understood the plate and foam as a system, we started thinking about ways to make the system even more effective. That’s when we struck upon the idea of adding Nike Air to store and return even more of a runner’s energy and provide even more cushioning.”

The Next system features three components, shown in the photo below, “working together to help runners on race day,” said Nike.

The Air Zoom Alphafly Next% features are updates from its predecessor, the Nike ZoomX Vaporfly Next% and Flyknit. The shoe is part of a suite of products scheduled to drop this summer including the Nike Air Zoom Tempo Next% and Nike Air Zoom Tempo Next% FlyEase, complementary training shoes that incorporate Alphafly technology and track spikes that extend Next’s design for rigorous use.

In October, Eliud Kipchoge, the world record holder in the marathon, broke the two-hour marathon wearing a prototype of the Air Zoom Alphafly Next%.

“For runners, records like the four-minute mile and two-hour marathon are barometers of progress. These are barriers that have tested human potential. When someone like Eliud breaks them, our collective belief about what’s possible changes,” said Tony Bignell, VP, Footwear Innovation. “Barriers are inspiring to innovators. Like athletes, when a barrier is in front of us, we are challenged to think differently and push game-changing progress in footwear design.”

Nike Air Zoom Alphafly Next% is “the next chapter,” according to Nike, where sports science and cutting edge design merge to enable athletes to smash personal records.