Nike, Inc. has a clear advantage in the current market as consumers and retailers focus on brands with the most strength and resiliency in a tough economy, but that doesnt keep the company from making the same type of cost-cutting decisions that their less fortunate competition is making this year.

Sales and profits were both up in the fiscal second quarter ended November 30 and futures also grew when excluding the effects of a stronger U.S. dollar and a weaker euro and British pound sterling, but company CEO Mark Parker still said they are going to be “managing very cautiously and conservatively” as they move through the next two quarters.
Complementing brand strength and a decent order portfolio (compared to the rest of the market) is a balance sheet that includes $2.7 billion in cash and short term investments at the end of the quarter.  Most expect the company to be the first to get paid by cash-strapped retailers in the coming year.  Tight management of accounts and receivables will also help limit exposure if the surge in retail bankruptcies materializes as analysts expect.
“Managing the marketplace is a key part of our long-term brand strength,” said Nike Brand President Charlie Denson, suggesting that brands that do not have strong product and a great relationship with customers are getting hurt right now.
Mr. Parker described demand creation — or marketing spend — as the “fuel that drives top line revenue” in remarks during the quarterly conference call with analysts.  “It helps attract more consumers, grow the markets where our businesses compete and increase our share of those markets,” said Parker.  “At the same time, we have tremendous transparency into our SG&A that we are able to get proactively surgical in managing those costs. For example, we are optimizing the impact of our digital marketing which is very cost-effective as well as leveraging the investments we make in our athletes and teams to enhance the way we reach and inspire consumers.”
Nike, Inc. revenues for the quarter grew 5.8% to $4.59 billion, with currency fluctuations contributing about one point of that growth.  Net income was up 8.8% for the quarter to $391.0 million, or 80 cents per diluted share.  Nike brand revenues grew 7.4% to over $4.0 billion, but revenues for the subsidiary business declined 4.3% to $565 million due primarily to a shifting portfolio of brands.  The continuing business, which includes Converse, Cole Haan, Hurley and Nike Golf, grew roughly 3% for the period.

The net result of the divestiture of Bauer and Starter and the acquisition of Umbro reduced NKE currency-neutral revenue growth by approximately one percentage point.
The Nike brand was down about 1.1% to $1.51 billion in the U.S. region for the fiscal second quarter, but the real energy once again came out of the international business as emerging markets in Asia and the Americas helped fuel a 13.2% increase to $2.51 billion in revenues outside the U.S.  Every region, excluding the U.S., posted currency-neutral gains in revenues and operating profits but futures backlogs are starting to suffer in the EMEA region.  The sales and profit gains outside the U.S. were also aided by the weaker U.S. dollar, but the upside is expected to diminish as the dollar strengthens.
Second quarter gross margins improved 40 basis points to 44.7% of sales versus 44.3% in the year-ago period due to “foreign exchange hedge gains, product pricing and mix changes,” offset in part by higher apparel closeouts as well as the lag effect of higher input costs.
Nike brand futures backlog was down 1%, but was up about 6% when accounting for the stronger U.S. dollar, and weaker euro and other currencies.
Total Nike brand footwear sales were up 7.7% to $2.35 billion in the fiscal second quarter from $2.18 billion in the year-ago period.  Apparel sales growth outpaced footwear worldwide, growing 8.2% to $1.42 billion for the quarter from $1.31 billion in Q2 last year.  Equipment sales inched up 0.5% to $263 million.
The Nike brand revenue decline in the U.S in Q2 was due to softness in apparel and equipment, while footwear inched up and continues to deliver “very strong futures orders growth.”  Sales to six of the brands top ten accounts increased while two were said to be “essentially flat.”  Revenues at Nike owned-retail stores grew 1% for the quarter, reflecting “growth in e-commerce and new store openings.”

Comp store sales for Nike-owned inline stores declined nearly 20% as management cited “limited promotional activity relative to the rest of the retail marketplace and locations in high tourist areas” as issues that drive down sales results.  Management said they had their biggest Cyber Monday in history — up more than 40% over last year  marking the biggest day the brand has had online since launching Web sales.
U.S. footwear revenue increased 1.0% for the quarter and continues to “significantly outperform” the competition in a challenging market.

Based on retail point-of-sale data compiled by SportScanINFO, the Nike brand picked up 3.5 points of market share in the trailing 52-week period, while the Jordan brand gained about seven-tenths of a point in Sport Footwear market share.  U.S. apparel revenues fell 2.5% for the quarter as “continued weakness in sportswear was partially offset by growth in running and team apparel.”  U.S. equipment revenues were down 17.4%, primarily due to “winding down” the timing business and “lower close-out sales.”

Footwear futures increased 6% in the U.S., driven by retailers demand for Nike and Jordan footwear, as they continue to gravitate toward safer futures bets.
U.S. pre-tax income declined 17.8% to $276.5 million, reflecting “lower gross margins and higher SG&A primarily driven by the expansion of Nike owned-retail.”
The Nike brand saw less upside from the weaker U.S. dollar in the EMEA region, which includes Europe, the Middle East and Africa, in the second quarter, as currency fluctuations only added two points of growth to the results for the quarter versus a ten point contribution in the year-ago period.   The 4% increase in currency-neutral sales — roughly half the increase seen last year as well  was driven by stronger running sales.  On a currency-neutral basis both footwear and apparel revenues grew, while equipment sales “eased slightly.”
The emerging markets in the region, which saw revenues jump 21%, drove the majority of the growth, partially offset by lower sales in Southern Europe.  Russia was said to have had a “very strong quarter, extremely strong,” but management said they are “keeping a cautious watch on what's going on with regards to both consumer confidence and buying trends” in the country.  Still, they said they are “very bullish” on the long-term outlook there.
Promotional conditions were said to be a little bit more robust than they were at this time last year, primarily across Southern Europe including southern France, Italy and Spain, and they have also seen some increased promotional activity in the U.K.  Denson said that the promotional environment in the U.K. has “certainly gotten a lot more promotional in the last 90 days.”  Management expects the increased activity to continue through the first half of calendar 2009.  Futures orders for the EMEA region dipped 1% in constant dollars and fell 13% in U.S. dollar terms.
Pre-tax income increased 19% to $276.5 million, reflecting revenue growth, gross margin improvement and stronger European currencies.
Asia Pacific region revenues grew 22%, including five points of growth from currency fluctuations. On a currency-neutral basis every product type grew revenues at double-digit rates and growth came from all countries in the region.
China continued to deliver strong growth as revenues for the quarter grew 27% and futures jumped 25% at quarter-end.   Management said comparisons will become more difficult as they begin to compare to the pre-Olympic build up in the third and fourth quarters of fiscal 2008.  Still, they said they were confident China “will be an enormous growth engine for Nike in the short- and long-term.”  They also called out their performance in Japan where currency-neutral revenues grew 7% and they “continue to see progress.”
Management said they have started to see and hear of inventory growth in China and are “starting to see a little bit more of a promotional environment.”  They said they are building an outlet network in China as they have elsewhere. 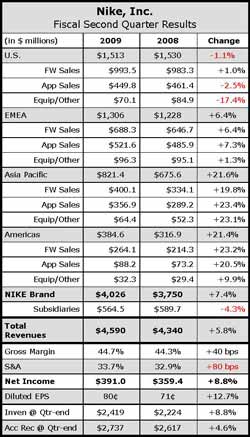 Asia Pacific pre-tax income grew 24.8% to $216 million, due to “strong growth in revenues and gross margins and stronger Asian currencies.”
The Americas saw a strong 21% increase in reported sales growth even though weaker currencies in the region cut two points of growth from the total.  On a currency-neutral basis, the region delivered double-digit revenue growth across all product lines and countries.  Denson said football (soccer), running and sportswear are leading the brand across the region.  Revenues in Brazil, the largest market in the region, were up 45% for the quarter, with growth accelerating during the quarter and November setting a record for shipments. Argentina was up 31%, Mexico was up 12% and Canada grew 10% in the period.
For the second quarter, pre-tax income grew 34.1% to $93.1 million, driven by “higher revenues and SG&A leverage.”
The subsidiary business, which includes Converse, Cole Haan, Hurley, Umbro and Nike Golf, was roughly $565 million in Q2, or a 3% increase when excluding the divested businesses and the addition of Umbro.  The growth was driven by high-teens growth at Converse and Hurley, but offset a bit by lower revenues at Cole Haan and Nike Golf.  NKE said they continue to make good progress building the foundation for future growth and profitability at the acquired Umbro business and the loss for Q2 was somewhat less than originally expected.
Reported pre-tax income for the subsidiary businesses was down 71% to $20.6 million for the quarter, driven in part by the divestiture of Bauer and Starter and the acquisition of Umbro.  The pre-tax income decline was mainly due to “gross margin declines within Nike Golf and Cole Haan, reflecting the weaker retail environment, and investments in demand creation and growth initiatives at Converse.”