As the sky falls on Wall Street and industry retailers and vendors wring their hands in troubled anticipation of what the financial crisis facing Main Street will mean to their businesses, a little company outside of the sleepy Northwest city of Portland, OR is quietly doing the things necessary to build their business in spite of all the drama surrounding the dire economic prognostications facing the U.S. and the world.

Not long ago, at an investor conference at the WSA Show, the subject of Nike, Inc.s ability to sustain its growth over time was discussed in some detail.  How to maintain the business amid reduced opportunities in a mature U.S. market where basketball had matured even more or how to build a broader international business to offset the expected plateauing of the U.S. business.  Why was the company attempting a mass retail strategy when the first effort clearly failed?

After first getting passed over for the top job a few years ago when the company went outside in a futile attempt to take the company in a new global direction, Nike, Inc. CEO Mark Parker has quickly become the next Phil Knight, with a solid vision, a commitment to operational excellence, and an ability to manage the elements of the business at its core.  Nike Brand President Charlie Denson has become Nikes General David Patreaus, securing solid partnership commitments with warring sectarian factions in the mall as the brand preaches “good for everyone” approach to allocations, exclusives and fresh product.  The level of trust on all sides is unparalleled.
This quiet little company turns in another exceptional performance during one of the toughest weeks the financial markets have seen since World War II.  The sales growth the company produced (+$777 mm) in its fiscal first quarter ended 8/31 was greater than Reebok Groups actual sales for its most recent reported quarter. 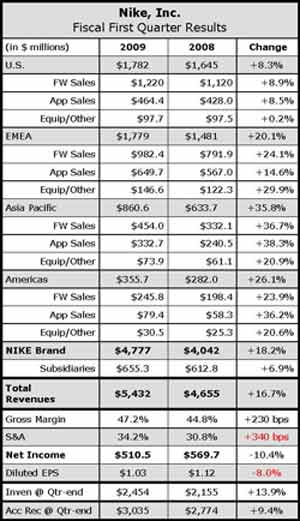 While the company basks in the successes of Bejing Olympics, an effort they feel will pay dividends for many years to come in the nascent sports retail market in the host country, they are also looking at the tactical elements that keep the business growing at home, while exploiting new market-share-grabbing strategies in Europe and many developing markets.
Progress against the 23:11 plan, which contains goals of reaching $23 billion in sales by the year 2011, appears to be on track as successful inventory controls, gains in U.S. market share, strength in its affiliate brand businesses and growth in the owned-retail business all combined to help offset any concerns with a strengthening U.S. dollar or a weak global economy.
Fiscal first quarter revenue was up 16.7% to $5.4 billion, with FX rate adjustments accounting for seven percentage points of the growth.  Net income declined 10.4% to $510.5 million for the period, but was up against a $105.4 million one-time tax benefit in Q1 last year.  Excluding the prior-year benefit, net income would have been up 10% and EPS would have risen 12% for the quarter.
Sales at Nike owned-retail stores in the U.S. grew 16% for the quarter, with comp store sales increasing 8% at in-line, first quality stores for the period.  Management said the companys e-commerce business was up 30% for the quarter.  Whats remarkable is how NKE can generate this type of owned-retail energy and still have retailers singing their praises (see Finish Line page 10).  Many feel it is the balanced approach they have taken, providing a strong pipeline of new product to their retail partners and enough exclusives to keep everyone growing and profitable.  Owned-retail revenues are up 18% globally.
The revamped and enhanced “Running Experience” at the NikeTown store in New York has apparently paid dividends, with sales jumped 45% for the period.  The “Boot Room” initiative at the London NikeTown location has created similar results in boosting football (soccer) sales.  The store, which was up and running in time for the Euro Championships this summer, posted a 40% increase in revenues.
In the subsidiary and affiliates businesses, Converse delivered another big quarter as revenues advanced 32% and the ONE Star product at 1,600 Target “performed beyond expectations” and Hurley generated its “biggest quarter ever,” posting 38% revenue growth for the period.  The latest brand to join the stable, Umbro, reportedly broke even for the quarter.
Sales were up 7% for the total Subsidiary business and pre-tax declined about 9%, but those numbers also reflect the divestiture of the Bauer business and the acquisition of Umbro.  Looking at the continuing business for the group, revenues were up 20% and pre-tax income jumped 19% for the period.
The Nike brand saw growth across all regions and across all businesses for the fiscal first quarter, posting 18.2% growth to $4.78 billion.  Nike brand posted an 18.8% increase in footwear sales to $2.90 billion.  Apparel sales were up 18.0% to $1.53 billion, while equipment sales grew 13.9% to $349 million.  Excluding changes in foreign currency exchange rates, Nike Brand revenues grew 11% for the fiscal first quarter.  The Brand Nike international business accounts for nearly 63% of brand revenues, growing 25% from the year-ago period.
In the EMEA region, which includes Europe, the Middle East and Africa, roughly 15 points of the 20.1% increase in sales came from shifts in currency.  In currency-neutral terms, “most” countries in the region posted growth, while apparel failed to post an increase.  The pre-tax income increase was said to be “tempered” by large demand creation investments around Euro 2008 and Olympics.
Mr. Denson said they were “off to a strong start” with football (soccer) and running in Europe.
Within the EMEA region, the Nike brand saw a 5% increase in revenue for the U.K., where the company has been cleaning up distribution and managing inventory and pricing.
In Germany and the Alpine countries, revenues moved ahead 11% for the period.  Emerging markets in the region again delivered the lions share of the gains, partially offset by weakness in Southern Europe.  Turkey and Russia were up about 30% for the quarter, but tough economies in Spain, Italy and France have curtailed growth there, as well as Portugal.
For the first time in a long time, currency exchange rates did not have an impact on futures backlog growth rates as EMEA posted 4% backlog growth at quarter-end in both reported and constant-currency terms.
The Asia-Pacific region again posted the highest growth rate of the regions, with currency exchange rate fluctuations contributing approximately ten points of the 35.8% increase in the region for the fiscal first quarter.  Currency-neutral growth came from “every major country in the region.”  Japan apparently continues to trend upward, posting revenue growth of 2% and futures growth twice that rate.  China revenues were up over 50% and futures were up by nearly the same rate.
Pre-tax income increased despite heavy investments in the Olympics and demand creation in China infrastructure, thanks to strong growth and improved margins.
The Americas region saw more organic growth and less upside from currency exchange rates.  FX rates accounted for only seven points of the 26.1% increase for the period.  Currency-neutral growth was said to be “balanced” across all product lines and countries.  Football (soccer), running, womens training and sportswear all had strong double-digit growth.
Pre-tax income growth was driven by revenue growth, improved margins and overhead leverage.
Mr. Denson said the U.S. region “performed extremely well in a tough retail environment.”  He pointed to “very strong performances” in running, action sports and basketball.  U.S. footwear revenues got a boost from running, soccer and womens training, as well as Brand Jordan, which is now holds the #2 brand share in the U.S., according to retail point-of-sale data compiled by SportScanINFO.
Apparel revenues were in positive territory, growing in the high-single-digits, with strength coming from training apparel and double-digit growth in both running and basketball apparel.  He said sportswear “remains a work in progress.”
The U.S. futures backlog was up 3.0% at quarter-end, which was said to be “powered by strong growth in footwear, partially offset by lower apparel futures, primarily sportswear.”  Footwear backlogs were said to be up “significantly more than 3%” at quarter-end.