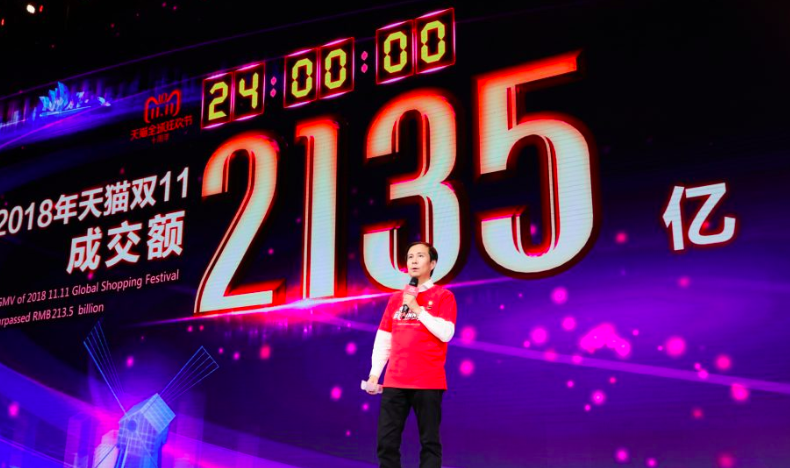 Singles Day, essentially China’s Black Friday, on Sunday again broke records as Alibaba racked up more than $30.8 billion in the 24-hour shopping event, up nearly 27 percent year-on-year. Nike and Adidas were among the 237 brands seeing more than RMB100 million ($14.4 million) in sales for Alibaba on the day.

The haul will like more than double the $14.5 billion taken online from Thanksgiving through Cyber Monday in the U.S. in 2017, according to Adobe Analytics.

Started as an anti-Valentine’s Day movement by college students in 1993, the day initially encouraged unmarried Chinese to buy gifts for themselves but has morphed into a day for anybody to treat themselves. Held annually on 11/11, Alibaba transformed the informal holiday into a shopping event in 2009 with widespread online discounts across its websites, include Taobao and Tmall.

Hyped by a gala Saturday night in Shanghai featuring singer Mariah Carey, supermodel Miranda Kerr and a performance from Cirque du Soleil, Singles Day’s sales for Alibaba hit $1 billion in one minute and 25 seconds. Alibaba earned a boost by adding participation of its Southeast Asia unit Lazada, as well as subsidiaries Ele.me, Koubei, supermarket chain Hema and other business units.

Other Chinese retailers, including JD.com, have joined the holiday and Single Days deals again cropped up in some other countries, including the U.S. as many Chinese living in the U.S. or Chinese Americans embrace the event. With the holiday’s focus on luxury and fashion, Saks, Barneys and Urban Outfitters offered 11 percent off all online sales in the U.S.

The Timberland Co. Appoints ConAgra Exec to Board