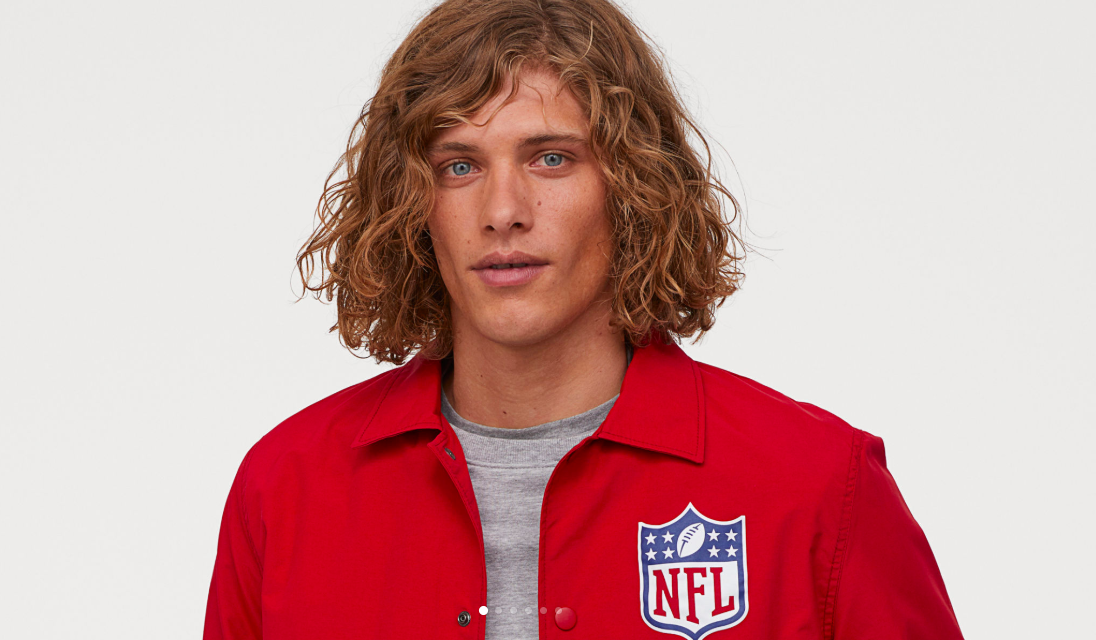 The National Football League announced a partnership with  Swedish-based fast-fashion retailer H&M to launch a range of NFL-branded apparel and accessories to support the league’s growth overseas.

The deal was brokered by IMG.

The NFL-branded men’s, women’s and children’s products will be sold in more than 20 countries, excluding the U.S., where Nike and Fanatics control the licensing rights. The areas include the U.K., China, Japan, Columbia, Germany, India, Mexico, South Korea and the Middle East.

The first collection is available now in H&M stores and online, with apparel prices ranging from $14.99 to $29.99. The range features men’s jackets, tops and loungewear. Women’s, children’s and accessories lines will follow next season.

The H&M range of apparel and accessories will aim to tap into demand generated by regular-season games in London and Mexico and the popularity of the Super Bowl, which is watched in 180 countries and broadcast in nearly 25 different languages.

“By partnering with H&M, we are able to reach fans in markets across the world with a diverse selection of apparel and accessories for men, women and children,” said Akash Jain, NFL vice-president of international commercial development. “NFL fanbases are growing throughout countries in every corner of the world and we want to continually meet our fans needs for fashionable apparel and fuel their fandom for years to come.”

Matthew Primack, senior vice-president, worldwide licensing at IMG, added: “We are delighted to be bringing one of the most popular sports leagues together with one of the world’s favorite fast fashion retailers. The NFL’s international appeal as a lifestyle and fashion brand continues to grow rapidly. With its reputation for creative collaborations and thousands of stores around the world, H&M is the perfect partner to provide an accessible and stylish collection of NFL apparel and accessories that will be sought after by football fans and fashionistas.”

In November 2019, the NFL, Nike and Fanatics have announced a new global partnership that gives Fanatics exclusive consumer product licensing rights to manufacture and distribute all Nike NFL adult products worldwide. The new global deal enhanced the original U.S. deal signed in 2018. As part of its partnership, Nike outfits the players and coaches while Fanatics outfits the fans.

As part of the expanded agreement, Fanatics will also operate local NFLShop sites across markets including Canada, Mexico, Brazil, the UK, Germany and China.