May Department Stores Q3 EPS Up on Decreased Sales

May opened four new department stores during the quarter: a Famous-Barr store in Columbia, Mo.; a Foley's store in Denton, Texas; a Hecht's store in Richmond, Va.; and a Kaufmann's store in Pittsburgh. The company opened a total of 10 new department stores in 2003. Year-to-date store openings for May's Bridal Group include 20 David's Bridal stores and three After Hours Formalwear stores. David's and After Hours plan to open 10 stores and 8 stores, respectively, by year-end.

During the 2003 third quarter, the company acquired two tuxedo rental and sales retailers — Desmonds Formalwear and Tyndall's Formal Wear — adding 71 stores to the After Hours unit of May's Bridal Group.

Subsequent to the third quarter, May entered into an asset purchase agreement with The Gingiss Group, Inc., a national tuxedo rental and sales chain, to purchase certain assets of the company including 125 stores and related leases, related trade names, and inventory. The agreement is pending completion of a sale auction and the approval of the U.S. Bankruptcy Court for the District of Delaware, where the Gingiss bankruptcy is pending.

At the end of the third quarter, May operated 450 department stores under the names of Lord & Taylor, Famous-Barr, Filene's, Foley's, Hecht's, Kaufmann's, L.S. Ayres, Meier & Frank, Robinsons-May, Strawbridge's, and The Jones Store, as well as 200 David's Bridal stores, 328 After Hours Formalwear stores, and 10 Priscilla of Boston stores. May operates in 46 states, the District of Columbia, and Puerto Rico. 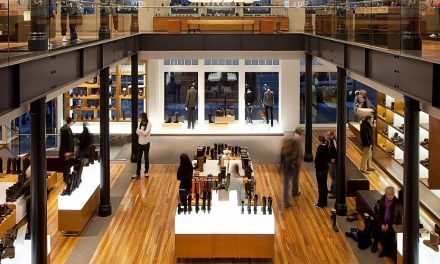 Boston’s The Tannery To Liquidate