Lululemon athletic, inc. resumed its growth in the fourth quarter of 2009, capping off a remarkable year that is even more impressive considering the woes of retail during fiscal 2009. In a conference call with analysts, management at the Vancouver-based seller of yoga and workout wear said the companys year-end results had benefitted from its expanded running line, a greater focus on value-oriented product and its April 2009 debut of its e-commerce site, which CEO Christine Day said has succeeded in improving revenues and creating heightened brand awareness. Likewise, a general tightening of inventory levels and an improvement to site supply chain capacity contributed to the rebound.

Net income for the quarter was $28.5 million, or 40 cents per diluted share, up from earnings of $10.9 million, or 16 cents per diluted share, in Q4 2008.  Consolidated sales, driven largely by same-store sales growth of 29% for the period, surged 54.5% to $160.6 million from $103.9 million in the prior-year period. Also contributing to sales growth was the addition of new stores, a stronger Canadian dollar and the addition of e-commerce, which management said contributed revenues of $9.3 million for the quarter.

Gross profit for the quarter was $86.6 million, or 53.9% of net sales, compared to $51.6 million, of 49.7% of net sales, in the 2008 fourth quarter.  Margins benefitted from merchandise margin improvement of 180 basis points, which management said was driven by improved product costing on winter merchandise and reduced in-store discounts and markdowns.  Also generating margin growth was leverage on non-merchandise costs, which contributed 160 basis point improvement, and a stronger Canadian dollar, which contributed 80 basis points.  The company said cost reductions were partially offset by air freight costs incurred throughout the quarter to keep pace with stronger-than-expected sales demand.

SG&A expenses for the quarter were $44.9 million, or 28.0% of net sales, as compared to $31.2 million, or 30.0% of net sales, in the year-ago period. Management said the increase was a natural increase in store labor and operating expense associated with our new stores and net revenue growth as existing stores. CFO John Currie added that costs associated with LULUs e-commerce site, higher professional and legal fees associated with ongoing litigation, and increase in IT and other corporate office costs had also contributed to the increase in expenses. Still, Currie pointed out that LULU has achieved a 200 basis point reduction in SG&A as a percentage of sales largely due to efficiencies in store labor, prudent expense management and leverage associated with improved store productivity.

Inventory at the end of the quarter was $41.4 million, down 15.3% from fiscal year-end 2008, due largely to the fact that spring merchandise expected to be in transit at year end actually was not delivered until early 2010. Management also attributed tighter inventory levels to continue efforts to move aged and obsolete inventory, higher demand and sell-through in the fourth quarter and generally lower product costs due to improved sourcing.

Regarding outlook, management expects to report sales of $125 million to $130 million for the first quarter of fiscal 2010. Same-store sales are expected to increase in the upper 20s as a percentage. Margins for the quarter are expected to improve due to a combination of several factors, including a favorable impact from foreign exchange and leverage on occupancy and depreciation. Assuming a tax rate of 25% and 71.7 million diluted weighted average share withstanding,   lulu expects earnings to be in the range of between 18 cents per diluted share and 20 cents per diluted share. Same-store sales are expected to remain strong against easy comparisons, but management said growth would likely stymie in the back-half of the year as comparisons stabilize.

For the fiscal 2010 year, the company expects net revenue to be in the range of $570 million and $585 million. Gross margins are expected to continue to improve on the strength of the Canadian dollar.

Management also stressed several initiatives for 2010, including capitalizing on its showroom strategy by opening 25 showrooms by the end of June. Management stressed the importance of new show rooms to impact future store openings by seeding new markets and further stimulating existing markets. 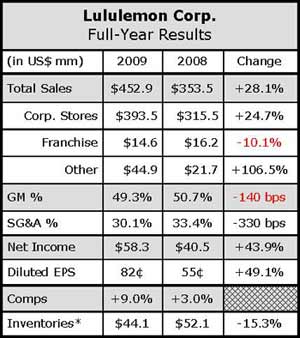