K-Swiss Q2 Sees More of the Same, but Europe Business May be Plateauing… 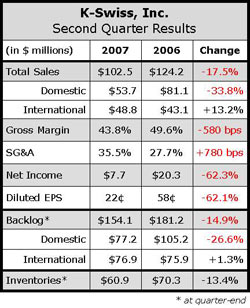 domestic business and continued strength in its international business, but also indicated that the brand “appears to be plateauing” until they can “effectively expand to other European countries.” The International backlog was up just 1.3% at the end of the second quarter and the U.S. order book continued to shrink last quarter. The at-once business was better than expected for Q2, coming in at 21% of the total business for the period versus 5% last year and far exceeding the 3% to 14% range forecasted for this year.

While the company exceeded expectations for sales and earnings for the period were at the top half of the estimated range, gross margins were “less than expected” and management said they did “not quite see the reversal in backlog trends for Q4” they expected. Margins shrunk 580 basis points due to “increases in inventory reserves, reserves for prepaid royalties, and product mix changes.”  SG&A expenses were up 78 basis points as the company over-invested in new product and people, including a 60% increase in travel expenses as new management burned up the miles working on new initiatives.  Operating margin for the second quarter was just 8.4% of sales, compared with 21.9% in the prior-year period.

The overall revenue decrease for the quarter was a result of the 24% decrease in the volume of footwear sold, offset by a 9% increase in the average wholesale price per pair.  Classic revenues were down 18% versus the year-ago period, with Classic Originals down 14% and Other Classics down 27% for the quarter.  The Childrens business was down 21% in Q2, reflecting the weakness in Classics.  Sales in Training were down 23%, but Tennis sales were up 15% for the quarter.  Royal Elastics brand sales fell 35% for the period, but backlog has just about doubled for the back half, albeit off a low base.

Classic originals accounted for 53% of Q2 revenues, while Other Classics contributed 16% of sales.  Childrens represented 17% of revenues for the period; Training was 6% of sales; Tennis was 5%; and other sales accounted for the balance.

Sales to the Foot Locker group were 12% of worldwide second quarter sales, compared with 14% in Q2 last year.  Sales to Foot Locker were down 29% for the period, while and sales to all other accounts worldwide were down 16% for the quarter.  Foot Locker represented approximately 17% of total order backlog at quarter-end, compared with 17% a year earlier, or a 16% decrease in the total backlog.  Backlog for all other customers was down 15% at the end of the period.

Looking ahead, KSWS expects third quarter revenues to be approximately $113 million to $123 million and earnings per diluted share to be in the range of 28 cents to 38 cents per share. The Q3 forecast reflects a “significant decline in domestic revenues; substantial investments in product development and marketing for the K-Swiss brand, including a retail strategy; continued expansion of international operations; and continued investment in the Royal Elastics brand.”