The Athletes Foot Stores, LLC gained approval last week for the results of its January 13 auction of roughly 60 store leases. DJM Asset Management was designated to pick up the most leases with 19 leases acquired for $367,000. PGAF Acquisition was next in line with 13 leases worth $550,000. Some of those leases may still go to other retailers that were also bidding on the balance of the leases.

Foot Locker and Finish Line went head-to-head on a number of leases, with Foot Locker prevailing on nine stores worth nearly $1.5 million and The Finish Line picking up four new doors for almost $2.2 million. The Finish Line actually paid more for one lease than all of the Foot Locker leases combined. That lease, for the store in Serramonte Center in Daly City, Calif., went to FINL for $1.56 million, a bid that bested FL by just $20,000. Foot Locker also missed out on the second most expensive lease, with FINL paying $560,000 for the South Shore store in Braintree, Mass. Foot Locker came up $10,000 short on that bid. Foot Locker took the next two largest leases, picking up a store in Prince Georges Plaza in Hyattsville, Md. for $475,000 and the Providence Place store in Providence, R.I. for $400,000. FINL came up $5,000 short on the PGP lease and $10,000 on the latter.

Hibbett picked up one lease for the Stone Mountain, Ga. store for $105,000. Shoe Carnival came in second on one lease in Johnson City, Tenn.

The court approved $5.85 million in bids. 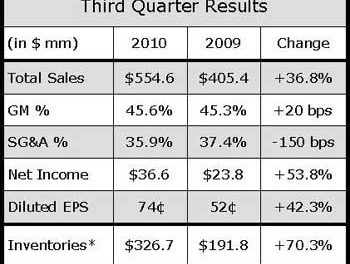 Dick’s SG Seeing Momentum Online and at Field and Stream