HanesBrands, the parent of Hanes, Champion and Gear for Sports, reported adjusted earnings per share jumped 49 percent in the fourth quarter on an 18 percent revenue gain.

“We had another outstanding year in 2014, generating significant shareholder value and again achieving record results for sales, operating profit and EPS,” Hanes Chairman and Chief Executive Officer Richard A. Noll said. “We are in the midst of a multiyear period of strong growth supported by our powerful company-owned global supply chain, Innovate-to-Elevate product platforms, and acquisitions. Our guidance for 2015 translates into another year of double-digit EPS growth and what would be another record year for sales, profit and EPS, despite the challenges of currency exchange rates.”

Key accomplishments for 2014 include:

Sales Growth in Each Business Segment. Net sales growth was at least high single digits for each business segment in 2014. Innovate-to-Elevate product platforms continue to perform well, including Hanes ComfortBlend underwear, Hanes X-Temp and Champion Vapor fabrics, and ComfortFlex Fit bras. With the exception of Activewear, each segment benefitted from acquisition contributions to sales growth.

“Our strong balance sheet and cash flow supports our value-creating business model of innovation, supply chain leverage and acquisitions,” said Hanes Chief Financial Officer Richard D. Moss. “We have generated $1.1 billion in operating cash flow over the past two years, invested in our business, made two important acquisitions, and have sustained a growing quarterly cash dividend. We remain in a strong position to create further value.”

Successful Acquisitions and Integrations. Hanes completed the integration of Maidenform within one year of the acquisition closing in fall 2013. The first Maidenform products developed wholly within the Hanes product development process are scheduled to debut in 2015. For 2014, the Maidenform acquisition contributed $491 million in net sales.

Hanes closed on the acquisition of DBApparel, a leading marketer of intimate apparel and underwear in Europe, on Aug. 29, 2014. DBA results will be reported in the International segment. Integration is under way, and Hanes continues to expect DBA’s annual operating profit to reach €100 million within three to four years through synergies, global supply chain leverage, and Innovate-to-Elevate benefits. For 2014, the DBA acquisition contributed net sales of $210 million (€168 million) in the fourth quarter and $291 million (€230 million) for the year.

Profitability Improvement from Innovation and Supply Chain. The company’s innovation platforms continue to perform well, and the company’s primarily company-owned supply chain continues to drive benefits from increased scale and improvement initiatives. Hanes ComfortBlend and X-Temp underwear and socks and ComfortFlex Fit bras across multiple brands continue to do well.
Innerwear’s operating profit margin of 21 percent in the fourth quarter increased 310 basis points, and for the full year the margin increased  130 basis points to 20.4 percent.

Hanes has issued full-year 2015 growth expectations and financial guidance. Incorporated into the company’s outlook are the expected negative effects of foreign currency exchange rates and Target Canada Co.’s announced plans to liquidate. In addition, the company has approved a 4-for-1 stock split to be executed through a stock dividend to be issued to stockholders March 3, 2015. EPS guidance will be provided on a pre-split and post-split basis.

The company expects the acquisition of DBA to contribute approximately €630 million of net sales in 2015 versus €230 million in 2014 and approximately €30 million of operating profit in 2015 versus €21 in 2014. For 2015, the company has fully hedged its euro-based cost of goods exposure for European operations. Integration planning for DBA has proceeded on schedule and the company expects to begin meeting with works councils in Europe in the first quarter of 2015.

The company’s 2015 pension contribution will be $100 million and capital expenditures are expected to be approximately $75 million. On a post-split basis, the company expects approximately 410 million weighted average fully diluted shares outstanding in 2015. 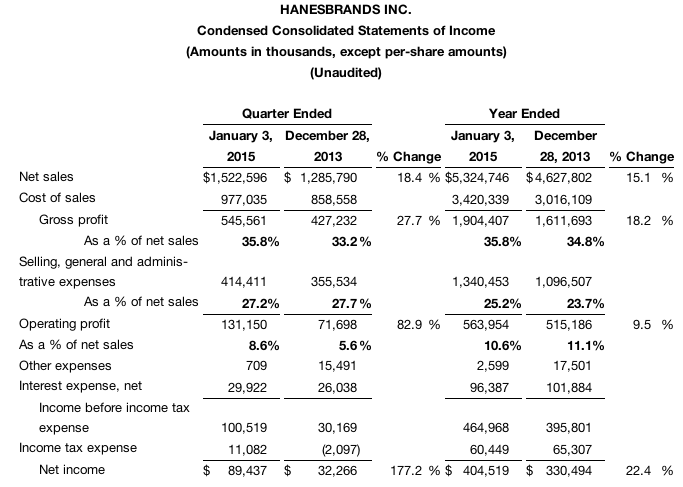 The Hockey Company Prices Its IPO