Gildan Activewear Inc. said adjusted net earnings of U.S. 35 cents per share were a record for its first fiscal quarter ended Dec. 29, which is seasonally the lowest sales quarter for T-shirts in the fiscal year. Earnings came in at the top end of the guidance range which the company had provided on Nov. 21, 2013. The company also reconfirmed its prior guidance for the full 2014 fiscal year for EPS, sales revenues, capital expenditures and free cash flows. In addition, the Company provided sales and EPS guidance for its second fiscal quarter.

Net sales for Branded Apparel were U.S. $189.6 million, up 7.1 percent from U.S. $177.0 million in the first quarter of last year. The growth in sales for the Branded Apparel segment was primarily due to continuing strong consumer demand for Gildan(R) branded underwear and continuing market penetration by Gold Toe(R) brand socks. The growth in sales of branded programs was partially offset by the impact of lower sales of private label programs and lower sales to global lifestyle brands. Overall retail market conditions continued to be weak in the holiday season.

During the first quarter of fiscal 2014, the Company utilized free cash flow of U.S. $68.5 million to finance the seasonal increase in inventories to service anticipated demand and capital expenditures of U.S. $58.1 million. The Company ended the first quarter with cash and cash equivalents of U.S. $79.1 million and outstanding bank indebtedness of U.S. $64.0 million.

The Company has re-iterated its guidance for the full fiscal year which it initiated on November 21, 2013. The main elements of the Company's financial guidance for fiscal 2014 continue to be:

– Sales revenues for Printwear slightly in excess of U.S. $1.5 billion

– Sales revenues for Branded Apparel in excess of U.S. $825 million

– Capital expenditures of U.S. $300-$350 million primarily for yarn-spinning, as well as expenditures for the continuing ramp-up of Rio Nance I, the initial investment in a new textile manufacturing facility, the reconfiguration and upgrading of the equipment at the former Anvil manufacturing facility in Honduras, a new sewing facility in the Dominican Republic, further investments in energy saving projects, and the new distribution centre in Honduras

The Company is assuming higher cotton costs than previously projected in the second half of the fiscal year, due to the recent rise in cotton futures prices, as well as further inflationary cost increases. However, these factors are forecast to be offset by slightly higher net selling prices. The Company's guidance continues to assume no material change in the current economic environment, including the continuation of current soft retail market conditions.

The Board of Directors has declared a cash dividend of U.S. $0.108 per share, payable on March 17, 2014 to shareholders of record on February 20, 2014. This dividend is an “eligible dividend” for the purposes of the Income Tax Act (Canada) and any other applicable provincial legislation pertaining to eligible dividends.

As of January 31, 2014, there were 121,955,968 common shares issued and outstanding along with 1,199,216 stock options and 722,319 dilutive restricted share units (Treasury RSUs) outstanding. Each stock option entitles the holder to purchase one common share at the end of the vesting period at a pre-determined option price. Each Treasury RSU entitles the holder to receive one common share from treasury at the end of the vesting period, without any monetary consideration being paid to the Company. However, the vesting of at least 50% of each Treasury RSU grant is contingent on the achievement of performance conditions that are primarily based on the Company's average return on assets performance for the period as compared to the S&P/TSX Capped Consumer Discretionary Index, excluding income trusts, or as determined by the Board of Directors.

Gildan is a leading supplier of quality branded basic family apparel, including T-shirts, fleece, sport shirts, socks and underwear. The Company sells its products under a diversified portfolio of company-owned brands, including the Gildan(R), Gold Toe(R) and Anvil(R) brands and brand extensions, as well as under licensing arrangements for the Under Armour(R), Mossy Oak(R) and New Balance(R) brands. The Company distributes its products in printwear markets in the U.S. and Canada, where Gildan(R) is the industry-leading brand, and the Company is increasing its penetration in international printwear markets. The Company is also one of the largest suppliers of branded athletic, casual and dress socks for a broad spectrum of retailers in the U.S. The Company is also developing Gildan(R) as a consumer brand for underwear and activewear. 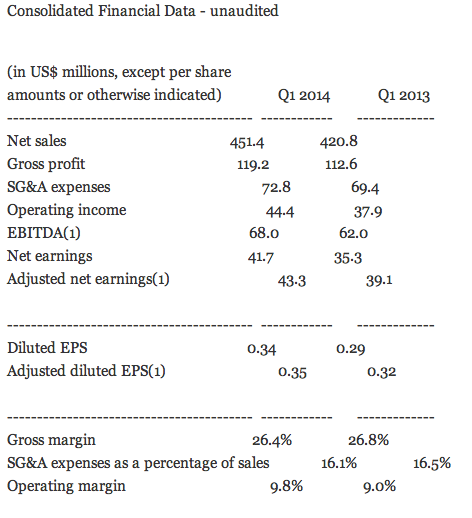 REI’s Next Prototype Store to Open Friday in Texas