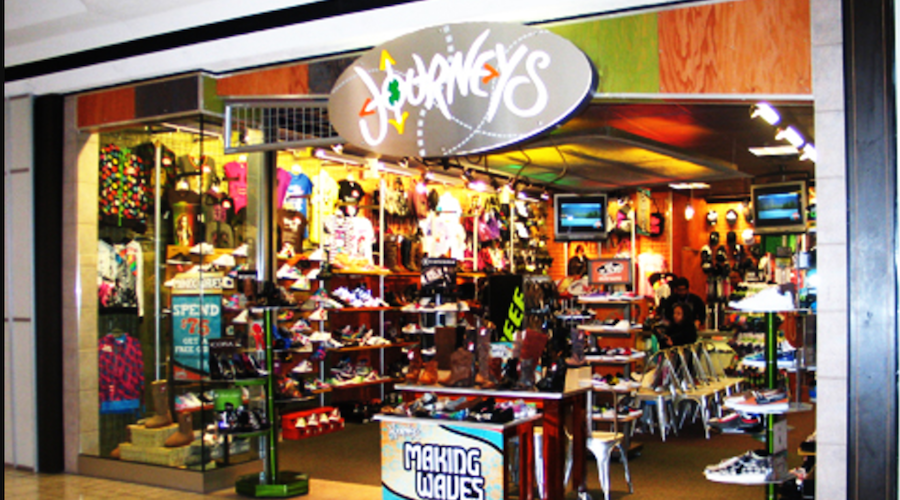 Genesco Inc. reported a loss in the first quarter, but results were a penny better than analyst’s consensus estimates and the company reiterated guidance for the year. Journeys saw “significantly” improved profitability as comps rose 6 percent. Lids’ comps dropped 7 percent but showed improvement over versus the fourth quarter.

Robert J. Dennis, chairman, president and chief executive officer, said: “Our first quarter results in total were within the range of our expectations, as continued strength in our U.S. retail footwear businesses helped to offset in part challenges in our other operating divisions. Journeys in particular delivered robust comparable sales and significantly improved profitability. Johnston & Murphy began the year with accelerating comparable sales and a strong earnings performance as well. While sales trends in the Lids Sports Group remained negative, they improved meaningfully compared with the fourth quarter. Meanwhile, in addition to a strong year-over-year comparison, a number of headwinds in the U.K. pressured Schuh’s performance. Overall, gross margins were up, driven primarily by channel and brand mix and increased full priced selling at Journeys and Johnston & Murphy. However, we deleveraged expenses due to negative store comps, resulting in profitability below last year’s level but consistent with our forecast.

“We are pleased with our start to the second quarter, as the arrival of warmer weather has helped accelerate demand for seasonal product and comps in each one of our businesses. While we remain cautious about Schuh’s near-term prospects, we are encouraged by the signs of improvement in our other major businesses, Journeys in particular. Looking ahead to the remainder of the year, our focus is on executing the key initiatives we have previously outlined aimed at fortifying the leadership positions of each of our concepts and reducing our overall cost structure. We are optimistic that we have the right strategies in place to drive enhanced profitability and greater shareholder value over the longer-term.”

Net sales for the first quarter of Fiscal 2019 increased to $645 million from $643 million in the first quarter of Fiscal 2018. Excluding the impact of exchange rates, sales would have decreased 1 percent. Comparable sales were down 1 percent, with stores down 2 percent and direct up 10 percent. Direct-to-consumer sales grew to 11 percent of total retail sales for the quarter, compared to 10 percent last year. 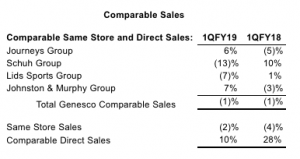 Selling and administrative expense for the first quarter this year was 49.9 percent, up 80 basis points, compared to 49.1 percent of sales for the same period last year.  The increase as a percentage of sales reflects higher expenses relating primarily to selling salaries and benefits and bonus accruals. Without exchange rate increases, expense dollars would have been flat for the quarter due to the impact of store closings, rent and other cost reductions.

For the first quarter, capital expenditures were $20 million, which consisted of $12 million related to store remodels and new stores and $8 million related to direct to consumer, omnichannel, information technology, distribution center and other projects. Depreciation and amortization was $20 million. During the quarter, the company opened 21 new stores and closed 35 stores. Excluding Locker Room by Lids in Macy’s stores, the company ended the quarter with 2,558 stores compared with 2,632 stores at the end of the first quarter last year, or a decrease of 3 percent. Square footage was down 2 percent on a year-over-year basis, excluding Lids Locker Room departments in Macy’s stores.

For Fiscal 2019, the company is reiterating its previously established full year guidance and still expects:
• Comparable sales to be flat to up 2 percent, and
• Adjusted diluted earnings per share in the range of $3.05 to $3.45.2 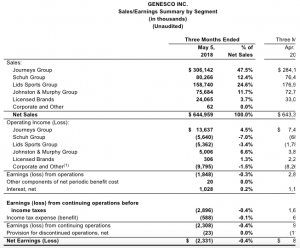