G-III Apparel Group, Ltd. reported second quarter earnings doubled to $12.4 million, or 27 cents a share, from $6.2 million, or 14 cents, a year ago. Driven by robust wholesale and retail performance, net sales increased 12 percent to $474 million from $424 million in the year-ago period.

Morris Goldfarb, G-III chairman, CEO and president, said, “We are pleased to report another strong quarter of growth and increased profitability. Growth in the quarter was driven by increases in our wholesale segment and an increase in comparable store sales from our G.H. Bass stores.”

Goldfarb concluded, “We will continue to implement our highly successful business strategy. We are excited to move into the fall and holiday seasons with a strong order book, good sell-through and improved profitability. We believe that our combination of market leading brands, great product and world class execution provide an on-going opportunity to enhance our leadership position and drive superior value to our shareholders, customers and partners.”

On an adjusted basis, excluding items resulting in other income in fiscal 2015 of $0.22 per share, net of taxes, non-GAAP net income per diluted share was $2.26 for the 2015 fiscal year.

For its third fiscal quarter ending October 31, 2015, the company is forecasting net sales of approximately $920.0 million compared to $812.3 million in the comparable quarter last year. The company is also forecasting net income for the third fiscal quarter between $83.0 million and $85.3 million, or between $1.78 and $1.83 per diluted share, compared to net income of $80.6 million, or $1.76 per diluted share, in last year's third quarter. 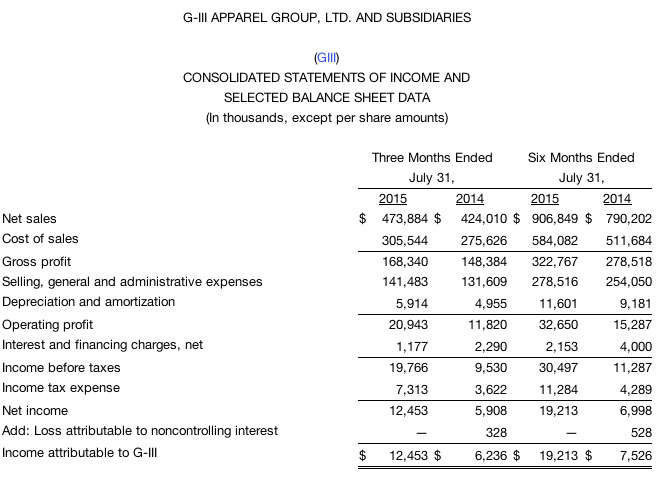