“The team at Foot Locker has produced another very strong quarter, marking our 19th consecutive quarter of meaningful sales and profit growth,” said Ken C. Hicks, chairman of the board and chief executive officer. “We are making substantial progress towards our key operational and financial objectives, including net income margin, sales per gross square foot, and return on invested capital.   Our banners have strong positions in the athletic marketplace; our financial footing is solid; and we have a depth of talent — at the store, field, and management levels — that is second to none.”

“The company is well positioned to build on the momentum the team has created over the last several years,” said Dick Johnson, executive vice president and chief operating Officer.  “It will be a tremendous privilege to lead the organization as we leverage our strengths, which include our global scope,  our banner differentiation, our omnichannel capabilities, and our people, in pursuit of the exciting opportunities we have identified to grow and improve the business in the near and long term.”

As of November 1, 2014, the company’s merchandise inventory was $1,324 million, 0.6 percent higher than at the end of the third quarter last year, while the company’s cash and cash equivalents totaled $916 million and the debt on its balance sheet was $135 million.

During the third quarter, the company repurchased 683 thousand shares of its common stock for $38 million, bringing the 2014 year-to-date repurchase activity to 3.55 million shares for $174 million.

During the third quarter, the company opened 35 new stores, remodeled/relocated 67 stores, and closed 21 stores. As of November 1, 2014, the company operated 3,474 stores in 23 countries in North America, Europe, Australia, and New Zealand. In addition, 46 franchised Foot Locker stores were operating in the Middle East and South Korea, as well as 27 franchised Runners Point and Sidestep stores in Germany and Switzerland. 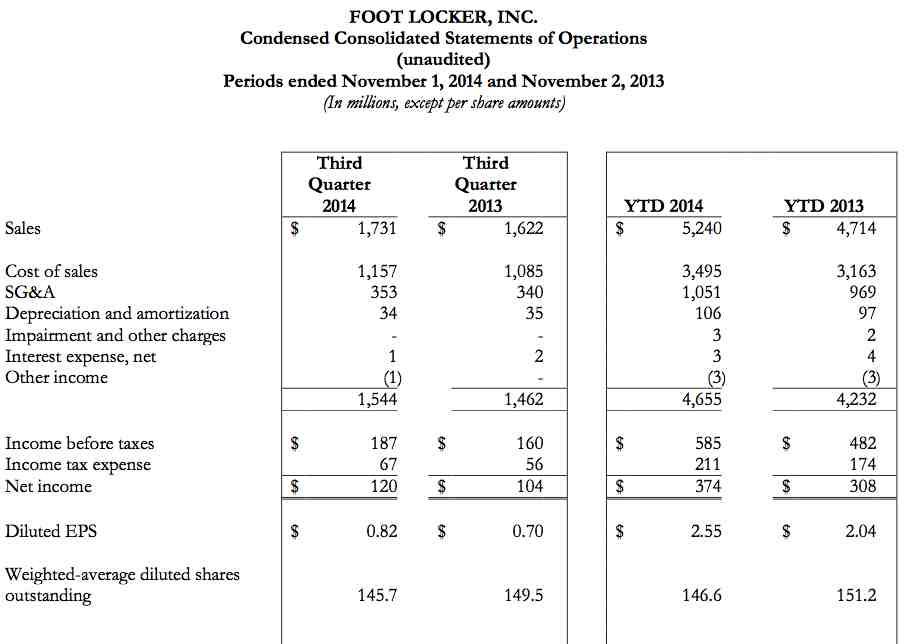