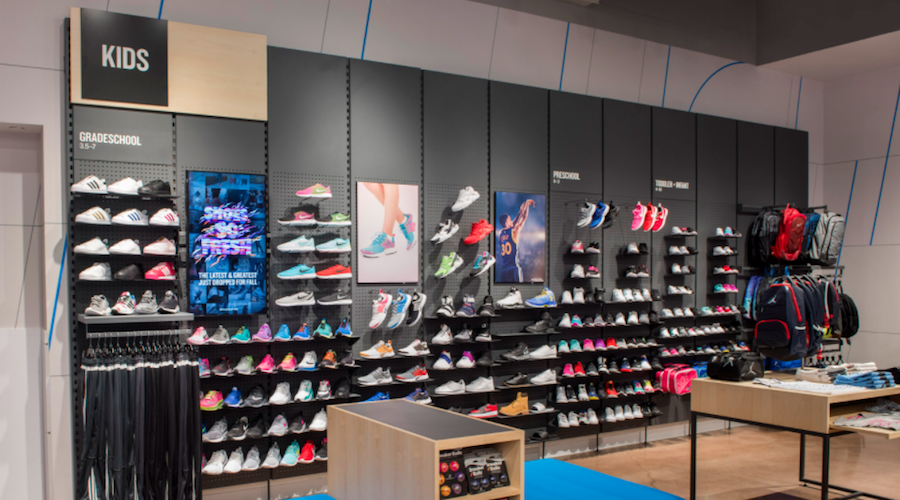 Shares of Finish Line Inc. showed some recovery on Friday after the retailer saw first-quarter earnings come in line with expectations as strict expense management offset a same-store miss. Officials were also bullish that comps would increase during the back half and wind up positive for the current fiscal year.

Shares climbed 92 cents, or 7.2 percent, to $13.65 on Friday. Shares had dropped 32 percent since the beginning of the year after the company reported a fourth-quarter shortfall.

In the quarter ended May 27, net earnings declined 15.4 percent to $8.14 million, or 20 cents a share, from $9.6 million, or 23 cents, a year ago. Adjusting the exclude the impact from store impairment charges, earnings were 23 cents a share, in line with Wall Street’s consensus estimate.

Consolidated gross margin decreased 140 basis points to 29.6 percent. The decline was attributable to lower product margin versus last year due primarily to lower full price selling driven by the challenging market combined with higher markdowns to clear slow moving inventory. Occupancy as a percent of sales was flat with last year.

Consolidated SG&A expense was 26 percent of sales, down 130 basis points from a year ago due to cost savings initiatives announced during the third quarter of fiscal 2017 and disciplined expense management.

Consolidated net sales were $429.8 million, a decrease of 0.1 percent over the prior year period. Wall Street on average was expecting $431.6 million.

“We delivered earnings per share in line with expectations despite some unanticipated pressure on sales and product margins late in the first quarter,” said Sam Sato, CEO, on a conference call with analysts. “The transformation efforts we’ve undergone over the past year to create a more nimble and efficient organization allowed our teams to react quickly to the slowdown in sales and adjust expenses to protect profitability.”

As expected, March sales picked up at the beginning of the month due the benefit from the decision by the IRS to delay income tax refunds compared with the year before. Trends slowed in March as we are up against the Easter holiday shopping period in the prior year.

With Easter falling in April this year versus March last year, sales reaccelerated in April and were up mid-single digits for the month. While sales trends were expected to slow in May, consumer traffic was down more than expected and were below plan. Added Sato, “While we are disappointed with how the first quarter concluded from a top line perspective there were several bright spots from our merchandize and category performances that have us in encouraged about the future.”

In footwear, comps were flat with low single-digits gains in men’s and kids’ offset by a high single-digit decline in women’s.

Within men’s, sales were driven by demand for multiple Nike retro-running styles including Huarache and Huarache Ultra as well as Presto and Presto Fly. Finish Line also had “great success” with the introduction of Nike’s VaporMax in late March.

Men’s basketball was dominated by retro and retro-inspired products from brand Jordan along with Nike signatures styles from Kyrie Irving and Paul George. Collectively, these platforms helped offset some softness within the remaining area of the category including a challenging comparison at the end of May from highly-successful product launches in the prior year period.

The lifestyle decline reflects shifts to more casual running styles such as NMD, Huarache and Presto. Strength was still seen from Superstar, Tubular Shadow and EQT from Adidas as well as retro-running styles from New Balance, Reebok and Puma.

In women’s footwear, solid sell-through of casual running and lifestyle products from several brand partners was more than offset by softer demand for performance running offering. Roshe and Juvenate from Nike, NMD and Superstar from Adidas, and Fierce and Fenty from Puma were top performers.

Overall, running is a larger share of its women’s business during the first quarter and some pressure on comps was expected due to the timing of new product introductions. Sato added, “Based on retail launches and the current pipeline, we are optimistic running trends will improve as the year progresses.”

Kids performed in line with men’s with sales driven by demand for casual running styles from multiple brand partners and performance products such as UltraBOOST and AlphaBounce from Adidas and Kyrie and Paul George from Nike.

Soft goods costs were down low-double digits with apparel declining low-single digits. Sato said this marked “significant improvement” from as progress was made narrowing assortments along with a heightened focus on key items. A low-single digit increase was seen in men’s and women’s branded apparels in the quarter versus double-digit declines for the category in each quarter last year.

“Overtime, we are confident this strategy will result in a smaller, more profitable soft goods business,” said Sato. “However, it will continue to be a tough headwind from the category, until we anniversary the start of this initiative in Q3. We continue to closely collaborate with our brand partners on creating more distinct and relevant product assortments that are right for our customers.”

Looking ahead, Finish Line plans to improve its merchandising efforts to position the chain as “the destination for the latest and greatest sneakers” and a number of hot launches are expected to revive comp gains.

“We have growing positions in many of the best-selling styles across running, basketball and casual platforms,” said Sato. “This includes VaporMax, which has continued to gain strong momentum since launching in late March. We have significantly more pairs of this hot sneaker in both men’s and women’s and we’ll introduce the kids’ version for the holiday.”

Finish Line also has a “meaningful allocation” of Nike’s expanding Air Max platform, including the Air Max player and an exclusive on the Air Max more starting in Q2. Retro-inspired running styles from Nike franchisees such as Huarache and Presto are also expected to help fuel improved results over the remainder of the year. Said Sato, “Additionally, we’ve collaborated on many of the new three products as well as on new and comprehensive go-to-market strategy across digital and in-store that will drive even deeper engagement with our customer.”

With Adidas, the chain’s exclusive PureBOOST model as well as UltraBOOST, UltraBOOST Uncaged and AlphaBounce running shoes are expected to support gains. Adidas Original is expected to continue its momentum with the Swift Run introduction as well as “very strong” demand currently for NMD, Tubular Shadow and EQT. Puma is expected to continue to see strength with updates to Fierce and drops of updated Fenty styles ‘”along with a robust offering of new classic models,” said Sato.

With regards to basketball, signature silhouettes including new models and color ways from Kyrie, Paul George and Kevin Duran are expected to drive growth although a shifting launch calendar in August creates a challenge in Q2.

To increase traffic and conversion outside launches, Finish Line app was updated during the quarter to include an enhanced curated inspiration feel, tailored product recommendations and access to upcoming product releases.  The chain’s infrastructure is being further integrated to better leverage our customer data.

Inside the store, a new format featuring a new The Finish Line logo, storefront, floor fixture and shoe walls will continue to roll out. During the first quarter, 17 stores were updated with the new design and 45 to 60 updates are set for the full fiscal year.

“As we’ve gotten further along in the process, we’ve gained greater efficiencies in executing the remodel, allowing us to lower the overall cost per location. This is adding to our confidence in achieving our targeted low-double digit ROI on a mid-single digit comp lift,” said Sato.

Finally, the next iteration of its Shoes So Fresh campaign will launch for the back-to-school shopping season.

“The campaign continues to drive increases in brand awareness at recall and brand interest,” said Sato. “More importantly, it provides us with the continuous platform to inspire, connect and engage with our customers through a conversation that focuses on the freshest sneakers in the category.”

At its in-store shops inside Macy’s, expanding and repositioning shops continues to fuel a “meaningful lift” in sales and operating profit, said Sato. Five shops were repositioned in the quarter and another 40 to 50 will be touched through the end of the year. The availability and penetration of kids is being expanded and the category is now offered in 275 doors. Kids’ sales grew 95 percent in Q1 and represented approximately 18 percent of our total Macy’s business, an increase of 800 basis points over a year ago

Finish Line’s Macy’s digital business increased 40 percent during the first quarter as higher conversions are being driven by expanded online assortments and increase store fulfillments. In total, digital accounted for 27 percent of overall Macy’s sales compared with 22 percent in Q1 last year. Said Sato, “Our Macy’s business remains on track to hit the high-end of our long-term goal of annual sales of $350 million in fiscal ’18, which is ahead of our original timetable.”

Outside revenue progress, Sato said Finish line expected to realize the $5 million in cost savings from the actions it took late last year to further streamline operations. Added Sato, “We are also continuing to explore additional opportunities to increase efficiencies and lower our expense leverage points. I’m confident that this work combined with the many initiatives in place to drive increased sales will allow us to achieve our guidance range for the full year.”

For the year, Finish Line still expects Finish Line comps to increase in the low-single digits range and adjusted earnings per share to be between $1.12 and $1.23.

For the second quarter ending August 26, 2017, Finish Line comparable store sales to decrease in the low-single digits range as comp trends returned to positive territory in June. Due to the shift in the basketball calendar, gross margins are forecasted to be down year-over-year similar to the decline experienced in Q1, while SG&A will deleverage approximately 100 basis points due to increase incentive compensation cost.

In the back half of the year, Finish Line comps are projected to increase low-single digit due to easier comparisons, the sales lift from additional remodels, increased qualities of many current best sellers, and the strong pipeline of launch product, including more kids’ takedowns of top performing adult sizes.