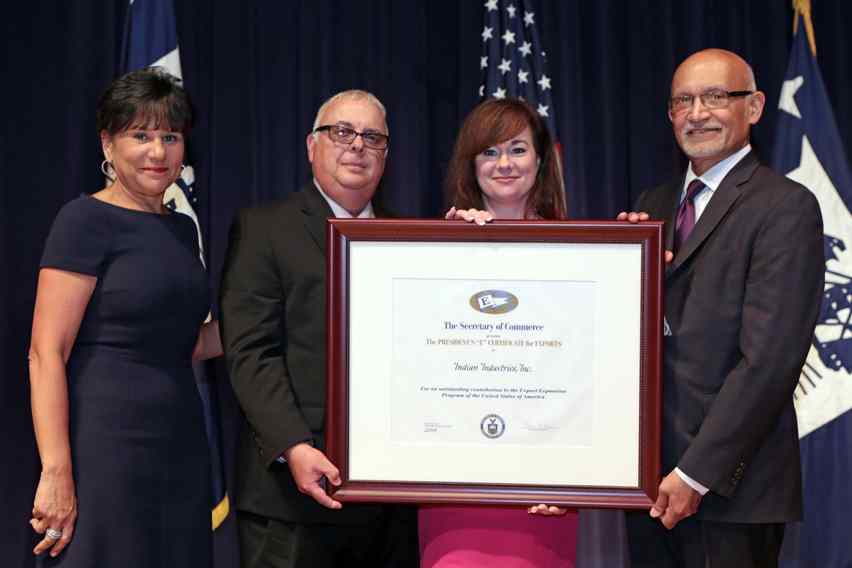 Escalade Sports has been recognized as a recipient of the President's “E” Award for Exports by the United States Department of Commerce for its achievement in making significant contributions to the increase of U.S. exports. The President’s “E” Award  the highest recognition any U.S. entity can receive for making a significant contribution to the expansion of U.S. exports  was presented during a ceremony at the U.S. Department of Commerce in Washington, D.C., on Monday, May 18.

United States Secretary of Commerce, Penny Pritzker, noted that Escalade Sports was selected for the “E” Award for Exports due to its sustained commitment to export expansion.  Specifically, the “E” Awards Committee was impressed with Escalade Sports' utilization of multiple export markets to support growth and stability in addition to its introduction of new sports and games to foreign markets. The “E” Awards Committee also recognized that Escalade Sports’ achievements have contributed to national export expansion efforts that support the U.S. economy and create American jobs.

“The President's ‘E’ Award winners are outstanding American businesses and organizations that have played a crucial role in strengthening and growing our economy through increased U.S. exports,” said Secretary Pritzker. “By selling Made-in-America goods and services internationally, winners are creating jobs in Indiana and their local communities. Congratulations to Escalade Sports. Exports are critical to our nation's competitiveness in the global marketplace and solidify our country's economic leadership across the globe.”

“We are honored to be named as a recipient of The Presidential “E” Award by the U.S. Department of Commerce,” said Dave Fetherman, president of Escalade Sports. “Exporting continues to play a major role within the strategic growth plan of Escalade Sports and we are committed to further developing our international business.”

In 1961, President Kennedy signed an executive order reviving the World War II “E” symbol of excellence to honor and provide recognition to America's exporters. Today, Secretary Pritzker honored 45 U.S. companies with the President’s “E” Award for their outstanding work to reduce barriers to foreign markets and to open the door to more trade around the world.

American companies are nominated for “E” Awards through the U.S. and Foreign Commercial Service office network, located within the Department of Commerce’s International Trade Administration. Record years of successive export growth and an applicant’s demonstration of an innovative international marketing plan that led to the increase in exports is a significant factor in selecting the overall winners.