DSW to Roll Out 22 New Stores This Fall

DSW Inc. is opening 22 new stores this fall.  The DSW store locations will be nationwide, including the opening of six stores in new markets. 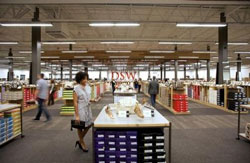 “Opening 22 new stores is exciting for us, especially during the fall season when we have such an extensive boot assortment to showcase. Expanding our store base allows us to grow our footprint in areas we already call home, while also bringing DSW stores and the DSW brand to areas where our customers have been anticipating our arrival.” – Carrie McDermott, Executive Vice President and Chief Operating Officer of DSW

The 22 new stores will open in the following cities nationwide AugustNovember: