Dick's Sporting Goods, Inc. reported net income more than doubled in the first quarter ended May 1 and subsequently hiked its guidance for the full year. But its shares fell after the retailers gave a tepid profit view for the current quarter. For the first quarter ended May 1, the company earned 22 cents a share, comfortably surpassing its previous guidance of 12 cents to 13 cents a share. That prompted the retailer to raise its guidance for the year from a range of $1.32 to 1.35 per share to a range of $1.41 to $1.44  growth of 18% to 20%.

However, the company projected a conservative profit forecast of 37 cents to 39 cents a share for the current second quarter, which compares to Wall Street's consensus estimate of 39 cents a share and year-ago earnings of 36 cents a share. Also, despite tougher comparisons in the second half, some analysts seemed surprised that sales guidance assumed flat comps in the back half of the year.

On a conference call with analysts, company Chairman and CEO Ed Stack said strong first quarter comp gains showed the retailer was “able to take full advantage of that cold weather that we had,” and the retailer couldn't be sure similar favorable weather would continue for the rest of the year. He also said the market had become “a bit more competitive from a pricing standpoint.” Finally, due to better business in the first quarter, the company invested in some additional marketing initiatives in the period and “if that continues, we may make incremental marketing investments in our business as we see appropriate in the balance of the year.”

“Our Golf Galaxy business continues to improve,” said Stack. “In addition to the same-store sales increase of 12.4%, gross profit margin improved year-over-year due to a reduction in promotional activity.” Stack said the improving comps in the DSG stores were broad based with hardlines, apparel and footwear, all comping positively.”

egarding categories, Stack said golf within its DSG stores was also positive-although not as strong as Golf Galaxy. He believes the bounce back in golf reflects some pent-up demand as well as more compelling product. He also suspects the category is benefiting from the new rule from the USGA that will do away with the U-groove design on the faces of irons and wedges in favor of a V shaped design.

Toning and running were the “two major components” driving footwear gains, according to Stack. He added that although others are entering the toning category, “We do feel that Reebok has such a meaningful lead in this category that they will continue to be the primary vendor for us.” Finally, he said Reebok's success in toning is helping “the entire Reebok brand” and toning's success overall is not stealing sales from other footwear categories. Said Stack, “We really see this category as primarily incremental.”

Meanwhile, the guns and ammo business “continues to be rather difficult,” with double-digit comp declines that Stack expects to continue through Q2 and perhaps longer as it cycles the prior-year strength.

“As far as back-to-school goes,” added Stack, “I can't say that there's anything new on the horizon that we think is going to be spectacular for back-to-school. We think that the toning product, the athletic footwear product, will continue to be strong and we'll continue to focus on that high school athlete that we've talked about in the past.”

Gross margins improved 270 basis points to 28.9% primarily due to the reduction in clearance activity at Golf Galaxy, reduced promotional activity at Dick's SG stores, and the Q1 2009 liquidation at the acquired Chick's Sporting Goods stores that were later converted to DSG locations. SG&A expenses increased to 24.2% of sales from 23.6%, due to planned recurring investments announced last August for a new building lease, IT equipment, “regional relevance projects,” and e-commerce. It also reflects increased marketing to support its private brand, Maxfli, and its Runners' Month campaign.

Five stores were added in the first quarter this year and DKS expects to add at least 24 new Dick's SG stores and five Golf Galaxy stores for the year. Eleven remodels are planned.

Expansion may be ramped up next year with a focus on the West Coast.

Stack said, “As we look out into 2011, we are seeing a little bit more availability with real estate so we anticipate we should see a little stronger performance out of new stores.”

Elaborating on Stack's comments on the competitive environment, company president and COO Joe Schmidt noted that Academy continues to open stores and Sports Authority is talking about opening stores at a slightly faster rate, “so it's going to be a bit more competitive going forward in the next year or two than it was in the past couple of years as people were slowing down their growth rates.”

But Stack added that it's not such as “bad thing.”

“There's going to be more stores out there, some people accelerating growth in the way that we're trying to accelerate growth and I wouldn't necessarily look at that as a bad thing,” said Stack. “I would look at that as people are feeling better about business.”

He also indicated that the performance of its stores in Texas, where Academy has a dominant presence, is improving.

Said Stack, “We've made significant investments in Texas around content, around marketing, and we're very pleased with what's going on in Texas right now.

Stack also said Dick's SG has been able to compete “very effectively” with TSA over a number of years. 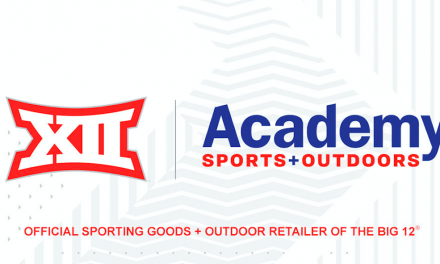