The strong results prompted the company to raise its guidance for the year ending in January by one cent to a range between $3.13 a share and $3.21 a share.

“We drove this profitable growth through new stores an increase in consolidated same-store sales detail of momentum in e-commerce and a meaningful margin rate expansion,” said Ed Stack, chairman and CEO, on a conference call with analysts.

Excluding restructuring charges to reposition the golf category in the prior year, earnings rose 11.1 percent to $90.8 million, or 77 cents per share, against $81.7 million, or 67 cents, a year ago. Results exceeded the top end of its prior guidance calling for earnings between 73 and 76 cents a share as well as Wall Street’s consensus estimate of 75 cents.

Adding in the year-ago charge, net earnings jumped 30.6 percent in the latest quarter.

Net sales increased 7.9 percent to approximately $1.8 billion. Consolidated same store sales increased 1.2 percent, compared to the company's guidance of approximately flat to an increase of 2 percent. The gains came on top of a 3.2 percent comp increase in the second quarter of 2014 which benefited from “substantial” World Cup sales.

The 1.5 percent gain at the Dick's SG chain was driven by 2.5 percent increase in sales per transaction and a 1 percent decrease in traffic. The decrease in traffic was primarily attributable to the anniversary of last year's World Cup event and golf promotions. Growth was seen across all of its three primary categories: hard lines, apparel and footwear.

Particularly encouraging were trends in golf. Said Stack of the golf category, “Our margins have improved significantly over last year and the apparel side of our business has comped positively throughout the second quarter. Additionally looking back at our golf business from the beginning of the year we have experienced sequential improvement in our comp sales.”

The company opened seven new Dick's SG stores in the quarter and generated 96.5 percent new store productivity. One Field & Stream store was opened and three Golf Galaxy stores were closed as their leases expired and the stores were not meeting internal hurdle rates.

Gross margins in the quarter improved 47 basis points year-over-year on a non-GAAP basis to 30.37 percent of sales. The improvement was primarily driven by less promotional activity.

SG&A expenses increased 10 basis points to 21.72 percent of sales on a non-GAAP basis, primarily due to planned investments in marketing, omni-channel initiatives and in e-commerce.

Total inventory grew 13.9 percent at the end of the quarter due primarily to earlier receipts of back-to-school merchandise to maximize selling opportunities around the season as well as to provide additional support for its outdoor business. At the end of Q3, Dick’s SG anticipates sales and inventory growth to be more closely in line with each other.

On the marketing side, the chain’s “Who will you be?” campaign has resonated with customers. Said Stack, “We find the authenticity is really resonating with our customers.”

Also underscoring its authenticity, the chain partnered with Team USA to become the official sporting-goods retailer of the United States Olympic Committee. Through its Dick's Sporting Goods foundation, the company is expanding its Sports Matter program and deepening its commitment to youth athletics.

On the merchandising front, the company remains “particularly excited” about its women's business, including its exclusive Calia by Carrie Underwood line. Said Stack, “This brand has performed better than expected and we continue to believe will become our number three women's athletic apparel band by the end of 2016.”

The e-commerce business is progressing toward its goal of moving the Dick's Sporting Goods e-commerce site onto its own platform by January 2017. In the first quarter, it relaunched GolfGalaxy.com, including adding ship from store capabilities.

The company remains on track to launch a Field & Stream transactional website later this year. Added Stack, “The new Field & Stream site will not only allow us to capture incremental sales that it will be able to operate and learn from having two sites on a single platform which significantly leverages our cost.”

Finally, Stack said the company remains “excited to grow our outdoor business,” including hunt & fish categories. During the quarter it opened its first combo store in Mobile, AL featuring a Dick's Sporting Goods and Field & Stream store under the same roof.

“We believe this new combined store concept will generate higher sales and store productivity as compared to our traditional standalone stores,” said Stack. “The hunt fish and camp product will all be in Field & Stream leaving more room in the Dick's stores for higher-margin faster turning categories. From a customer standpoint they benefit from an expanded assortment in the ability to move between the stores once inside. We plan to have four of these combo stores in place by the end of 2015.”

In the Q&A session, Stack noted Dick’s will opening 10 Jordan stores this fall as part of an effort to support higher-margin categories. The company is testing the opening of 75 in-store shops for Polo Ralph Lauren, the official uniform maker for Team USA. Said Stack, “Although that's only 75 stores right now, it's a test and we expect that to be significantly more going into 2016 and 2017. But we continue to work the mix and try to drive the apparel business and footwear business and those higher margin categories.”

Looking ahead, Dick’s SG now expects EPS in the range of $3.13 to 3.21 for the current year, which compares to previous guidance in the range of $3.12 to 3.20 per share. In the year-ago period, the company reported consolidated earnings per share of $2.84, or $2.87 excluding a gain on the sale of an asset and golf restructuring charge.

AAFA President To Step Down

Merck Takes Over for Heckman as K2 CEO 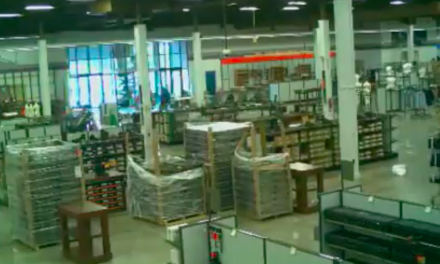