Dick’s Sporting Goods has apologized for excluding female athletes from its basketball catalog after a 12-year-old girl complained that she didnt feel represented.

Im sorry, CEO Ed Stack said in a letter addressed to McKenna Peterson that was posted on Twitter. We clearly messed up and I can personally guarantee that next years basketball catalog will prominently feature female athletes, as it should have this year.

He also offered to meet with the family during a future trip to Arizona.

That letter went viral after her father, Chris Peterson, a Phoenix sports photographer and McKenna’s dad, tweeted a picture of it.

I would just like to say thank you, the girl said after receiving the apology. She said it’s important sports companies take gender equality seriously, she said, Because I think girls should be treated just as equally as boys.

In her initial letter, the 12 year old wrote that “”It’s hard enough for girls to break through in this sport as it is,
without you guys excluding us from your catalog,” she added.

Although the basketball catalog does include women, they are portrayed in passive or supportive roles: “sitting in the stands” or “mentioned once in the catalog on page 5 for some shoes” or as “cheerleaders on some coupons,” McKenna wrote.

The Petersons had said they might take their business elsewhere unless Dick’s resolved to include more women in its advertising.

“Maybe my dad will take me to some other store that supports girls to actually PLAY basketball and follow their dreams and not sit on the sidelines and watch the game to get my next pair of shoes and equipment,” McKenna wrote. 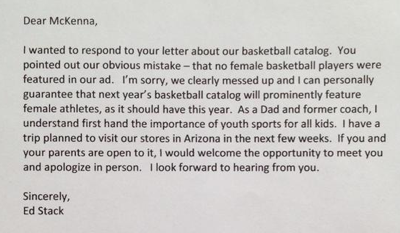 All Eyes on Gander Mountain…