Cycling’s Women to Watch Shake Up the Bike World

Who are this year’s cycling industry women to watch?

The BLC, which is owned and managed by the BPSA, is an annual, three-day conference for industry leaders and key stakeholders that includes networking, education and collaboration on key issues and opportunities facing the cycling industry today. The awarded scholarships cover conference registration, round-trip airfare and hotel accommodations.

Applicants for the scholarship had to be females working in the bike industry for at least three years in a management-level role.

“When I applied, I explained that where I work all the sales reps are men, except one, and there aren’t any regional women other than myself,” said Rebecca Karbon, north regional sales manager at Specialized Bicycles, and one of three recipients of the “Cycling’s Women to Watch,” scholarship.

This will be Karbon’s first year attending the conference. “I’m looking to be exposed to more women in the industry, and networking to find ways to increase the employment of women in cycling.” She explained to SGB that her department at Specialized recently had several openings and it was a challenge to attract women to apply for those roles and move into leadership positions. “There are a lot of women from other industries who know about purchasing and sales who can use that expertise in the bike industry,” she said. “At the conference I’m hoping to learn about hiring practices and where the talent pool. It’s all about exposure; letting women know there are already females here in the space, and room for more.”

“The Bicycle Leadership Conference is the perfect opportunity for these women to gain invaluable industry insight, while expanding their professional network.” – Deanne Buck, Executive Director, OIWC

Schulze at Trek remarked on the caliber and trajectory of the BLC that, “for the past many years, the BLC has profiled the opportunities around growing the industry by focusing on the women’s market, which happens to parallel what I do every day.” Although she has followed the happenings and major trends and discussions at past conferences, this will be Schulze’s first year attending. “This year I’m looking forward to participating in similar discussions, as well as meeting other industry leaders working to grow the industry.”

When asked to address the biggest challenges facing women in the cycling industry Schulze respectfully skipped the question saying confidently, “I don’t think about the obstacles.” However, when it came to talking accomplishments, Schulze was happy to elaborate;

“Our accomplishments come in many big and small ways. We have more women in leadership roles than ever before, the industry is valuing what a diverse work force brings to the table in new and important ways. At retail, more women own shops and more shops are focused on creating a welcoming and friendly customer experience. And finally, organizations like the OIWC are creating leadership opportunities and helping to developing career paths for women. They are establishing networks that lead a change and are providing better products, services and opportunities to bring more women into the sport and workforce,” she said.

“I feel like we are in a pivotal time for women in cycling. I see a lot of effort that is being made to diversify the bike industry…”
– Sarah Johnson, Quality Bike Products

When Johnson at QBP took a macro look at the bike industry and its inclusion of women, she told SGB, “I feel like we are in a pivotal time for women in cycling. I see a lot of effort that is being made to diversify the bike industry, as well as attention over issues of objectification.”

Johnson referenced the 2015 Interbike scandal where controversial socks displaying the backsides of two underdressed women were handed out as fun swag. “The response from the industry showed there is a new, higher expectation and standard,” Johnson concluded.

The response, which called out the design as overtly and condemningly offensive, hit its strongest note in the form of a blog response from Surly’s Marketing Manager, (and another bicycle industry woman revolutionizing the game) Christina Julian. She wrote on September 15, 2015:

“Sex Sells.” What an antiquated marketing strategy. Pairing your product or service with something or someone described by the herd of humanity as “sexy,”… There will be people both male and female that just don’t understand how this sets our industry back. How this creates an environment for women to be assaulted both physically and verbally inside and outside of the workplace. I would like to ask those that do get it to continue to talk about these instances.

Both Johnson and Karbon noted that despite setbacks or old ways of thinking about women in the cycling space, the time for large-scale change is now, and it’s happening in stride with events like the April Conference, BPSA and largely, efforts from the OIWC.

Their collaboration for the “Cycling’s Women to Watch,” not only shines a spotlight on the tremendous talent females bring to the category, but how the category must reciprocate the love. This year marks the second conference where full rides were awarded to a selection of cycling’s women to watch, and BPSA Executive Director Ray Keener put forth that it won’t be the last. “We hope to continue this great tradition,” he said.

Meb Keflezighi Turns to ElliptiGO to Avoid The Pounding 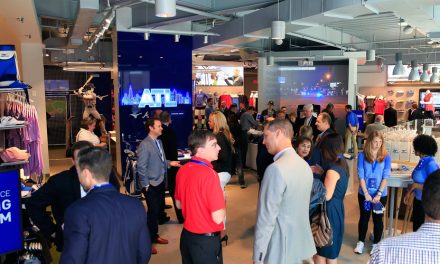