Columbia Sportswear is working diligently to reestablish its flagship brand in the specialty channel and at higher-end retail and department stores. Speaking at the Goldman Sachs Retailing Conference, Tim Boyle, president and CEO, admitted that part of the brand's recent slump can be tied to over-expansion in moderate channels.

“I think part of our historical problem, or maybe even our more recent problems, have been a too heavy a focus on products that satisfy that moderate customer and less investment in products that would be for the true user,” said Boyle. “And so I think we've changed that focus now, and I believe that the response from the retailers has been positive towards that change in our philosophy of product.”
Besides coming up with unique styling, technology is particularly being looked at to create more differentiated offerings. In 2008, 15% of Columbia's offerings had some demonstrable technology, but that number has grown to between 40% to 50% currently and is heading toward 80% to 85% in 2010. With the innovation, average retail selling prices will rise, “but most of our retailers are in fact embracing that. They prefer to sell more expensive merchandise,” said Boyle.
The technical emphasis comes as competition has increased in outerwear. While private label has been Columbia's biggest competitor virtually across channels, other branded competitors with more technical product, especially as it relates to the outdoor core consumer, have been increasingly competing with the brand. He ruefully noted that Columbia's consistency of delivering 20% operating margins earlier in this decade had attracted those competitors.
In footwear, Columbia is now incorporating Techlite, one of its proprietary compounds, into componentry. Other technologies planned for Fall 2010 include improved insulation qualities that are visible to the consumer.
“These are technologies which are easy to understand,” said Boyle. “We don't have to have a chemist or a physicist present to explain the garments and we're expecting that those kinds of changes and improvements will help us to regain our position of prominence in the market.”

Boyle assured the audience that Columbia wasn't walking away from selling to volume retailers but he said the overall focus in both apparel and footwear was on delivering a more segmented approach for each channel.
“We get a lot of value from big volumes at many places,” noted Boyle. “It allows us to be a very competitive supplier to specialty stores, where other, more narrowly distributed product ranges can't be as competitive on the sourcing side. But too much of that, or too much focus on that [value] part of the distribution channel, can be detrimental. And I think we allowed ourselves to get too focused on that.”
Looking ahead, Boyle said he expects to see “gradual improvement” in the U.S. economy, but added that the  company has to remain cautious in light of the potential credit issues with some of its customers.
“We have to be measured in terms of how we look at this recovery and how ebullient we want to be with our inventory investments, etc.,” said Boyle.
Indeed, COLM has taken the “smallest speculative position” on inventories for fall and Boyle indicated that “there's literally no opportunity” to get back into goods.
“Retailers have made their bet, and so, again, weather has to be cooperative for us to be successful,” said Boyle regarding the holiday season. “And I would expect not only for us but other vendors to the retail trade and retailers themselves, if the expectations are exceeded, there'll be less promotional activity, higher margins, not necessarily a bigger top line, but some improvement in the financial performance.”
>>> The need to move to more value at specialty retail benefits Columbia.  If they can clearly differentiate the product line they could have a win here… 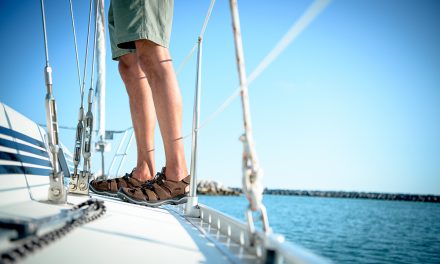