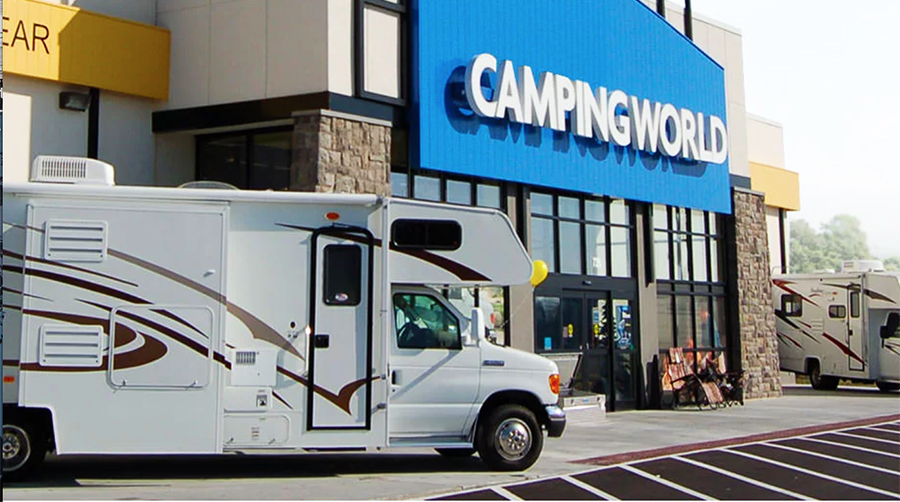 Moody’s Investors Service downgraded the ratings of Camping World, including the corporate family rating to B3, the probability of default rating to B3-PD, and the senior secured bank credit facility to B3. The outlook is negative.

“Today’s rating action reflects the potential for ongoing softness in the RV market as consumers sort through how the effects of the coronavirus will impact their big-ticket purchases during 2020,” stated Moody’s Vice President Charlie O’Shea. “While the culling of the Gander stores is largely complete and Camping World undertaking significant mitigation measures during Q4 2019, risks remain given the discretionary nature of the remaining product line,” continued O’Shea. “That said, liquidity remains adequate, with around $140 million in cash at FYE December 2019 and significant unencumbered vehicle inventory that is fungible.”

Rating Rationale
Moody’s wrote, “The rapid and widening spread of the coronavirus outbreak, deteriorating global economic outlook, falling oil prices, and asset price declines are creating a severe and extensive credit shock across many sectors, regions and markets. The combined credit effects of these developments are unprecedented. The retail sector has been one of the sectors most significantly affected by the shock given its sensitivity to consumer demand and sentiment. More specifically, the weaknesses in Camping World’s credit profile, including its exposure to RV sales, have left it vulnerable to shifts in market sentiment in these unprecedented operating conditions and Camping World remains vulnerable to the outbreak continuing to spread. We regard the coronavirus outbreak as a social risk under our ESG framework, given the substantial implications for public health and safety. Today’s action partially reflects the impact on Camping World of the breadth and severity of the shock, and the broad deterioration in credit quality it has triggered.

“Camping World’s B3 rating considers its weak quantitative credit profile due to the pruning of the Gander Mountain store network, with over half of the acquired stores now closed and soft industry fundamentals that will be exacerbated by the effects of the coronavirus on consumers, especially as they consider large, discretionary purchases. At FYE 2019, debt/EBITDA had climbed to the mid-7 times range, with EBITA/interest of 1.2 times, both of which are well weaker than our downgrade factors of 6.5 times and 2 times. Support for the rating emanates from Camping World’s leading market position within the recreational vehicle segment, with a business model that provides multiple sources of revenue, with retail sales, membership sales, and parts and accessories through its dealership and retail networks, as well as the risks inherent with its acquisition-based growth strategy. The SGL-3 speculative grade liquidity rating reflects adequate liquidity, with cash and unencumbered vehicles providing over $500 million at FYE 2019, with meaningful maturities long-dated, however, Moody’s notes that revolving credit availability is relatively weak and free cash flow generation is variable. The negative outlook reflects Moody’s view that there remains a potential downside from the spread of coronavirus and the lingering economic demand “shock” which will impact discretionary large purchases by consumers including RVs. Ratings could be downgraded if due to either weakness in operating performance or financial policy decisions such as any but de minimus share repurchases, debt/EBITDA remains above 7.5 times or EBITA/interest is sustained below 1.25 times, or if liquidity were to weaken. Ratings could be upgraded if operating performance reversed its present negative trends such that debt/EBITDA returned to around 6.5 times and EBIT/interest was sustained above 2 times, and good liquidity was maintained.”