Brunswick Corporation announced that Patrick C. Mackey, 61, will retire from the company March 1 after more than seven years of service. Mackey is president of the Mercury Marine Group, chief operating officer of Brunswick's Marine businesses and a Brunswick executive vice president.

An accomplished business leader with more than 35 years of management experience, Mackey joined Brunswick in October 2000 with a personal commitment at that time to lead the Mercury Marine Group for five years. Mackey quickly developed a strong reputation for building successful relationships within the marine industry, with Mercury dealers, its boat builder partners, and other customers. Under his leadership, Mercury also galvanized its efforts to imbue the industry's leading marine engine brand with operational excellence and technological advancements.

“Pat has been a visionary for our industry who has championed technology, while setting new standards for customer and dealer relations. I am personally grateful for all that he has done at Mercury, which faced significant challenges when he arrived,” said Dustan E. McCoy, Brunswick chairman and chief executive officer. “As all of us at Brunswick have come to expect of Pat, he gave us far more than he promised, both in terms of time and accomplishments. Through Pat's leadership, both Mercury, in particular, and Brunswick as a whole have been strengthened, leaving us very well positioned for the future.”

Mercury has been at the forefront of marine-engine manufacturing since the company's inception in 1939. That tradition carries on today, as Mercury products continue to meet the evolving demands of discriminating and ecology-minded consumers. Under Mackey's leadership, J.D. Power and Associates has ranked Mercury Marine's OptiMax engine “Highest in Customer Satisfaction with Two-Stroke Outboard Engines,” and Mercury MerCruiser engines “Highest in Customer Satisfaction with Sterndrive Engines.”

Mackey is a very experienced general manager and international executive, having spent 30 years in a variety of senior roles with E.I. du Pont de Nemours Corporation in Europe. He also was an executive vice president with Witco Corporation, Greenwich, Conn.

“As Pat moves on to the next phase of his life, knowing that Mark and Kevin will continue to provide leadership and direction to the operations each has guided since 2004 ensures that Mercury Marine will continue to set new standards in product innovation and customer service,” McCoy concluded.

Golf Rounds Down 1% in August 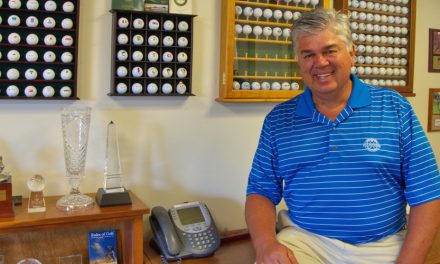 David Labbe Begins Tenure as Chairman of NSGA Board