Gross margin for the second quarter of 2014 was 40.8 percent compared to 41.0 percent in the prior year.

“Our second quarter results reflect the health of both our retail and wholesale businesses, as we continue to benefit from – and expand on – our portfolio realignment efforts,” said Diane Sullivan, CEO, president and chairman of Brown Shoe Company. “At Famous Footwear, our focus on delivering a seamless omni-channel experience to our consumers helped kick off our Back-to-School selling season. At our wholesale brands, our trend-right merchandise is resonating with both consumers and retailers.” 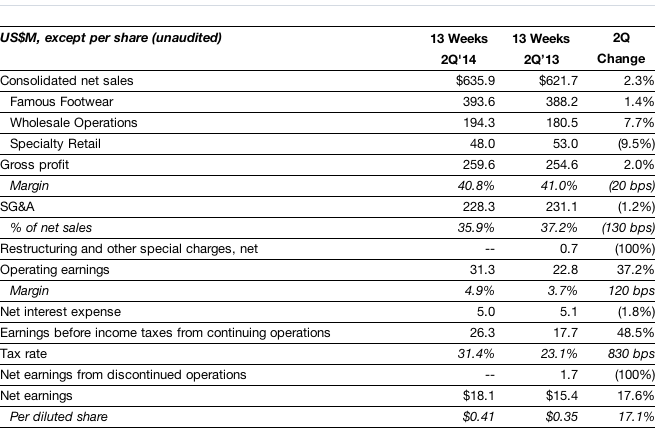 Famous Footwear second quarter 2014 sales of $393.6 million were up 1.4 percent year-over-year, with same-store-sales up 1.6 percent. Performance in the quarter was driven by canvas, as casual styles continued to resonate with consumers. During the quarter, 16 stores were closed or relocated and 17 new stores were added.

Inventory at the end of the second quarter was $657.7 million, up 6.8 percent from $615.9 million in the prior year. Wholesale inventory was up 22.9 percent, while Famous Footwear inventory was up 2.5 percent. At quarter-end, Brown Shoe Company had no borrowings against its revolving credit facility and $46.9 million of cash and equivalents. The company’s debt-to-capital ratio improved to 28.1 percent from 34.2 percent in the second quarter of 2013.

“Despite a continued, industry-wide decline in traffic patterns and an overall tough retail environment, we were able to deliver against expectations in the second quarter,” said Russ Hammer, chief financial officer of Brown Shoe Company. “To account for our better-than-expected second quarter performance, we are raising our annual guidance range to $1.50 to $1.60.”

Brown Shoe previously had been forecasting earnings in the range of $1.47 to $1.57. 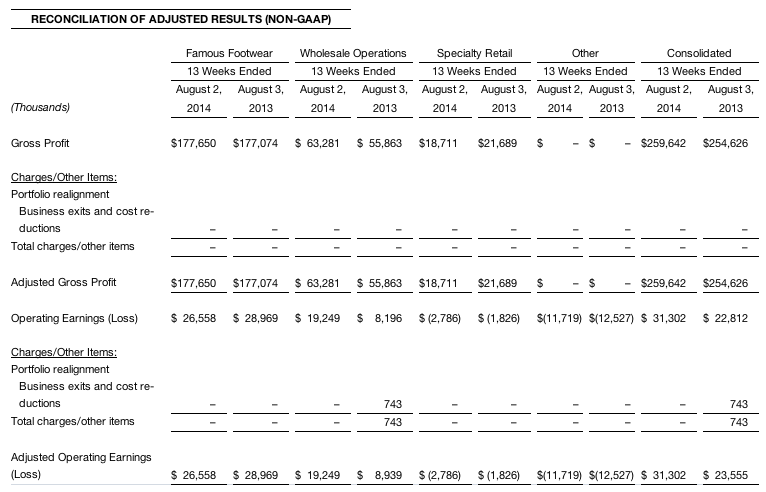