Ashworth, Inc. ended a disappointing third quarter with the announcement that it is exploring strategic alternatives including a possible sale or merger of the company. The company has retained Kurt Salmon Associates Capital Advisors as its financial advisor. That announcement came after the company ended its fiscal third quarter with sales down 8.7% and a wider net loss.  One bright spot for the company was that the companys domestic golf distribution channel did see sales increase in spite of declines elsewhere.


Total revenues in the domestic golf channel increased 5.5% for the third quarter to $18.2 million from $17.2 million last year, representing the fourth consecutive quarter of channel sales growth. Revenues increased at both on-course and off-course golf retailers for the quarter as a result of the implementation of new sales management processes and a strengthening of the sales team in both quantity and quality. However, retail sell-through during the third quarter of 2008 was said to be below expectations, causing the company to expect fourth quarter sales to decline as well.
Revenues for the corporate distribution channel were $4.3 million, a decrease of 31.5% as compared to the same period last year, mainly due to reduced corporate spending and unusually high levels of discounted merchandise in the marketplace, which the company attributed to the soft economy.
Revenues for the retail distribution channel were $1.1 million, a decrease of 30.9% from $1.7 million in the third quarter 2007. This decrease was driven by a consolidation of retail accounts and their associated location closures, a challenging retail environment as well as a decision by the companys management team to strategically exit a number of large accounts.
Third quarter revenues for Gekko Brands, LLC were $11.7 million, a decrease of 7.2% over the third quarter 2007. The decrease was primarily due to softness in the collegiate/bookstore channel as well as continued deterioration from the Outdoor Direct catalog sales and the timing of certain events in the golf and NASCAR/racing channels.
Revenues from company-owned stores were $2.6 million for the quarter, a decrease of 19.8% over third quarter 2007. The decrease in revenues from the company-owned outlet stores was primarily due to the difficult economic environment combined with product assortment and merchandizing issues.
Revenues from the international segment decreased 14.4% to $7.3 million. Revenues were significantly lower in Europe largely due to reduced in-season replenishment orders from the companys resort, golf and retail customers as well as lower corporate revenues, due in part to the slowing economy in Europe. Within the international decline, net revenues for Ashworth UK Ltd. decreased 23.1% to $4.7 million for the third quarter from $6.1 million for the same period of the prior fiscal year. This decrease was due to a reduction — reduced end season replenishment orders from the European resort, golf and retail customers, as well as lower corporate channel revenues, all a result of a difficult European economy. However, net revenues for the other international segment increased 7.2% to $2.6 million due primarily to the favorable effect of currency exchange rates as a result of the U.S. dollar weakening against the Canadian dollar compared to prior-year periods. 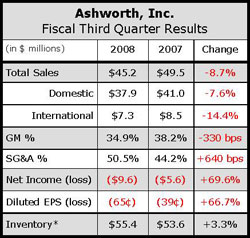 Pukka Re-Signs With OHSBCA Through 2021 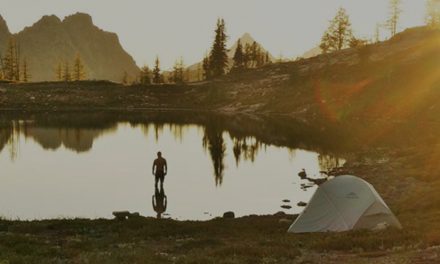