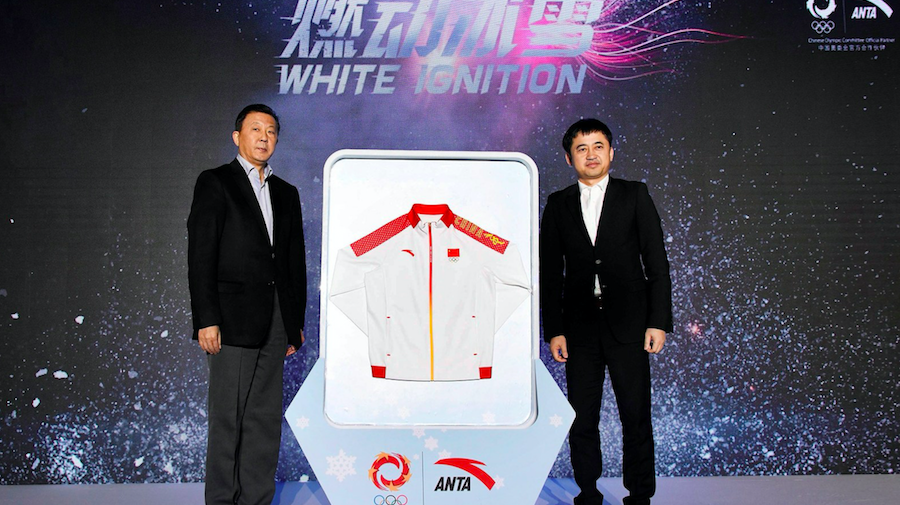 Anta Sports Products Limited announced that the launch ceremony of the PyeongChang 2018 award ceremony outfit for the Chinese Sports Delegation took place at the General Administration of Sport of China in Beijing.

At the ceremony, Li Yingchuan received the “Champion Dragon Outfit” from Ding Shizhong. The countdown to the 2018 Olympic Winter Games has officially begun and the Chinese Sports Delegation will be competing in PyeongChang soon. Anta Sports will provide the Chinese Sports Delegation with wining outfit across two Olympic cycles, from PyeongChang 2018 to Beijing 2022, marking the partnership of COC and the Company for four consecutive Olympic cycles.

Li Yingchuan, Vice Minister of General Administration of Sport of China and Vice President of the Chinese Olympic Committee, received the PyeongChang 2018 “Champion Dragon Outfit” for the Chinese Sports Delegation from Ding Shizhong, Board Chairman and Chief Executive Officer of Anta Sports

Anta Sports has been a partner of COC since 2009. The Company has joined hands with the Chinese Sports Delegation to compete at over 30 major international events over the past eight years. Anta Sports meticulously developed a range of different themes for the winning outfit, including a Chinese knot for the Vancouver Winter Olympics, a champion dragon for the London Olympics, a theme of the beauty of China for the Sochi Winter Olympics, and a message of “Go Surprise Yourself” for the Rio Olympics. The Company demonstrated the spirit and appeal of Chinese sport to the world and witnessed the glorious moments of Chinese sport when Chinese athletes received medals on the podium in Anta’s winning outfit.

On September 28, 2017, Anta Sports became the Official Partner of Sports Apparel for the Organising Committee for the 2022 Olympic and Paralympic Winter Games. The marketing period for the official partners covers multiple international sports events from 2017-2024 administered by the International Olympic Committee and International Paralympic Committee including PyeongChang 2018, Tokyo 2020, Beijing 2022 and Los Angeles 2024.

Olympic sponsorship is the highest level of sports sponsorship. The fact that Anta Sports stands out from intense competition to become an official partner of COC again has demonstrated the strength of Anta Sports as a company, its brand and its products. Being the partner of COC for four consecutive Olympic cycles also makes Anta Sports the most committed partner.

The cooperation with COC for PyeongChang 2018 and Beijing 2022 is the continuation of Anta Sports’ Olympic strategy. It is also the beginning of the Company’s effort to respond to the country’s “snow and ice” initiative, to actively cultivate the winter sport population.

The ice and snow industry is also called the “white economy”. Hosting the 2022 Winter Olympics in China will no doubt serve as a catalyst for the development of the winter sport in the nation. During the Beijing Winter Olympics cycle, the number of participants in winter sport is estimated to have an explosive growth from the current level of less than 20 million people to 300 million. Income from other associated industries driven by the ice and snow programs during the winter Olympics cycle is estimated at over RMB300 billion.

Back in 2010, Anta Sports started its strategic partnership with the Winter Sports Management Center of the General Administration of Sport of China. The Company had provided the China winter sport national team with outfit for the Vancouver Winter Olympics and the Sochi Winter Olympics, showcasing the appeal of China’s winter sport to the whole world at various stadiums and medal podiums. Going forward, Anta Sports will provide high value-for-money snow and ice gears to meet the demand of the ice and snow population and lower the threshold for their participation. The company will also develop an ice and snow ecosystem – a platform that integrates information, exchange of ideas and education. In addition, Anta Sports will join forces with the Beijing Organizing Committee for Beijing 2022 to launch a series of snow and ice experience events and competitions.