Amer Sports, which owns the Salomon, Wilson, Arc'teryx, Mavix and Suunto brands,  announced the next phase of its restructuring would focus on its Ball Sports segment after reporting charges at its Wilson brand caused it to swing to a loss on higher revenue in the second quarter.

The Finnish company reported net sales of €376.1 million or the second quarter ended June 30, up 4 percent currency-neutral  (c-n) from €377.2 million in the year earlier quarter. Double-digit growth in Apparel, Footwear and Cycling, was partially offset by a minor decline in Ball Sports mainly due to continuous clean-up of unprofitable sales.

Gross margin increased 30 basis points to 43.9 percent.  EBIT excluding non-recurring items was €-17.6 million, compared to a loss of €-18.7 million in the second quarter of 2013). Non-recurring items were €-1.2 million (0) and were related to discontinuing unprofitable products at Wilson.

“The second quarter is typically a low sales quarter for Amer Sports, nevertheless we continued to deliver a solid 4 percent currency neutral growth, driven by Apparel and Footwear, Business to Consumer, China as well as Cycling and Fitness,” said President and CEO Heikke Takala. “We continued to define and execute a new strategy for Ball Sports, with the objective to first improve the gross margins and then re-ignite profitable growth. In this context, we discontinued some unprofitable Wilson product lines, and this affected our Ball Sports sales.”

Net cash flow after investing activities was €-38.7 million, an improvement from €-50.0 million a year earlier.

“The trading conditions have continued to be quite challenging, partially due to the Winter Sports Equipment market being cautious and due to the political uncertainties especially in Russia and Argentina,” said Takala. “However, we continue to have strong momentum in the majority of the businesses, with significant further acceleration opportunities especially in Apparel and Footwear, Business to Consumer, emerging markets, and increasingly in digital products and services. To capitalize on these acceleration opportunities faster, and to speed up the Ball Sports turnaround, we will start the next phase of our restructuring as announced today.”

Amer Sports said its outlook for 2014 was unchanged. The company expects global trading conditions to remain challenging, with some regional improvements. In 2014, Amer Sports' net sales growth in local currencies is expected to meet at minimum the company's long-term annual 5 percent growth target and EBIT excluding non-recurring items to improve from 2013. The company will continue to focus on the growth of Apparel and Footwear, consumer-driven product and marketing innovation, commercial expansion and operational excellence.

The company said that following the successful completion of the restructuring announced in 2012, it will now move into the next phase of restructuring. The primary objectives are to re-ignite profitable growth in Ball Sports and to further accelerate Amer Sports' growth towards 2020 especially in Apparel and Footwear, Business-to- Consumer, and digital products and services. The program will help to drive further scale and synergies across the Group and it will enable re-allocation of resources into the focus acceleration areas.

This phase of the restructuring will be executed during the next 18-24 months. Related non-recurring expenses of approximately €60 million will mostly be recognized during the second half of 2014. Approximately €25 million of the total expenses will have cash flow impact.

The restructuring is Group-wide and focused on the following key areas:

Re-igniting profitable growth in Ball Sports, especially in Individual Ball Sports, including termination of low-profitability sales and non-core product lines and related R&D, and restructuring of Wilson Apparel and Footwear and Go-to-Market model.

Resource re-allocation to support faster growth in the Group's strategic growth areas: Apparel and Footwear, Business to Consumer, and consumer engagement through digital products and services.

Driving further scale and synergies and decreasing complexity and duplication in business areas, regions, functions, sites and platforms.Amer Sports moves into the next phase of restructuring to further accelerate profitable long-term growth towards 2020 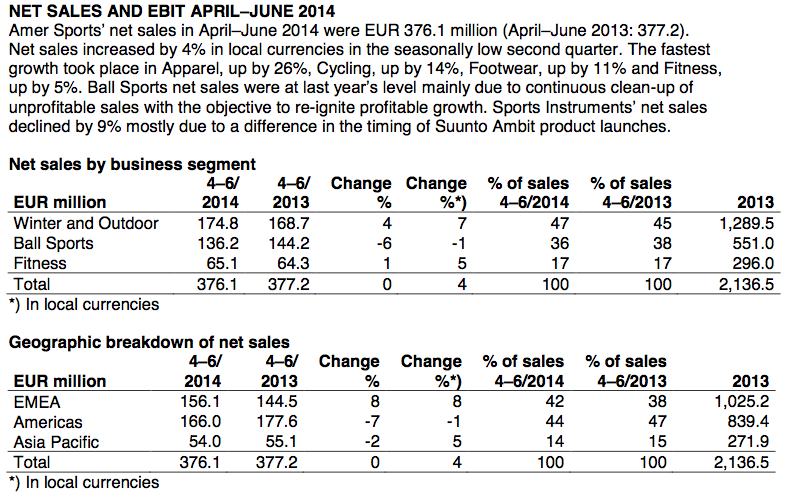 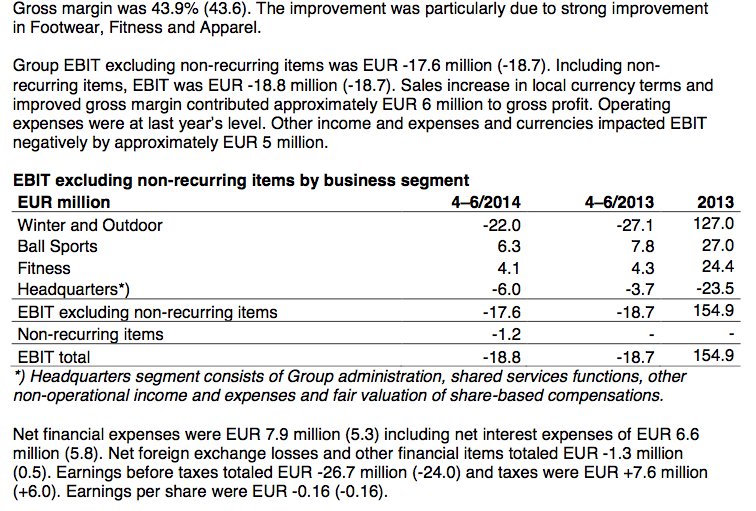 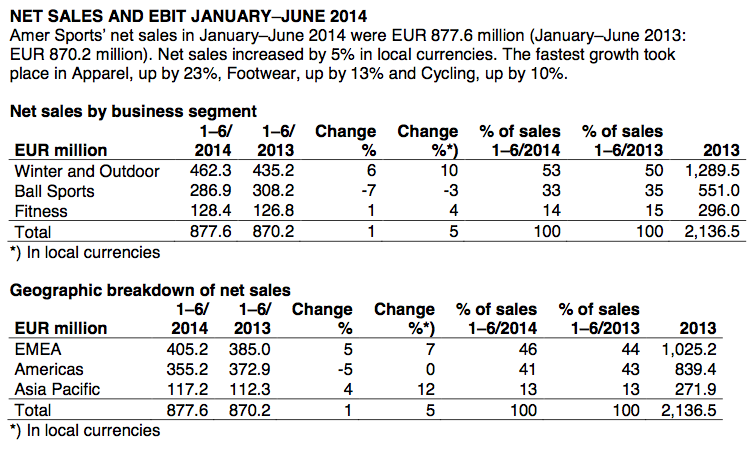 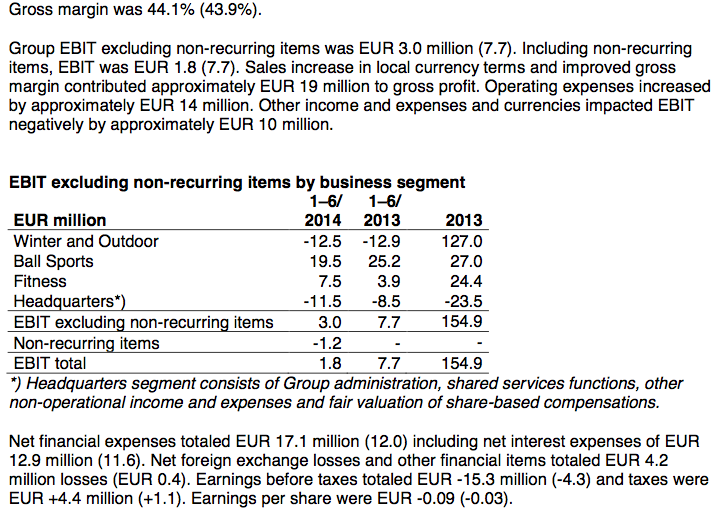