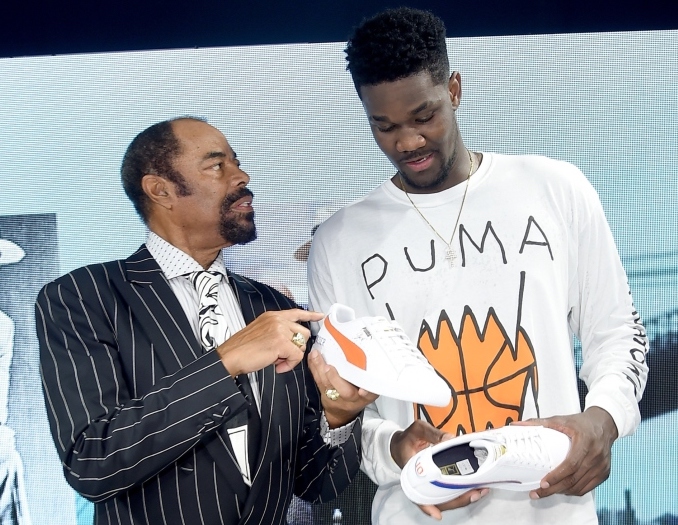 Marking the company’s return to basketball in a big way, Puma announced the signing of Deandre Ayton, the No. 1 pick in the NBA Draft, to a multiyear endorsement deal. Puma also honored basketball legend Walt “Clyde” Frazier with a lifetime contract and hired Jay Z as creative director to help guide basketball marketing.

U.S. Ski & Snowboard, the Olympic national governing body for ski and snowboard sports in the U.S., announced that Mark Schneider has joined the organization as chief technology officer.

CrossFit Inc. and Beyond the Whiteboard have signed an exclusive agreement to link the data-driven fitness company with a software platform that will help CrossFit athletes and affiliates maximize their results.

Adidas announced a multiyear partnership with 2017-18 Calder Trophy (Rookie of the Year) finalist Mathew Barzal of the New York Islanders.

Even with the threat of wildfires and a nebulous economic outlook, western mountain destinations are coming off a strong spring and are on pace for yet another record-setting season of lodging performance, according to Inntopia.

Alterra Mountain Co. entered into an agreement to purchase Solitude Mountain Resort in Utah, which would bring the company’s total to 13 year-round mountain destinations throughout North America, including the world’s largest heli-skiing operation.

GoPro Inc. announced that Ty Ahmad-Taylor, vice president of product marketing at Facebook, has joined GoPro’s board of directors.

The University of Memphis and Nike have agreed to a five-year extension valued at more than $2 million per year.

Lacoste will launch an exclusive Olympic Heritage lifestyle apparel collection as part of a new partnership with the International Olympic Committee.

L.L.Bean has partnered with leading coworking provider Industrious to launch an initiative to bring more outdoor time into the workday with the introduction of “Be an Outsider at Work.”

Goat, a leading marketplace for authentic sneakers, announced the appointment of Lizzie Francis as the company’s first COO. Francis will report to CEO and co-founder, Eddy Lu.

Following President Trump’s announcement of his intent to impose an additional $200 billion in tariffs on goods manufactured in China, Tom Cove, SFIA’s CEO and president, urged the two countries to return to negotiation table and said the “strain of explosive tariff threats back and forth strikes at the foundation of our economy.”

The Footwear Distributors & Retailers Of America (FDRA) said the potential for additional tariffs on $200 billion in Chinese goods will likely “negatively impact all Americans of every walk of life.”

Nike pulled an apparel collection line done in collaboration with Los Angeles-based Undefeated after being accused of copying the US Naval Academy’s coat of arms.

Aside from the more common goals that people try to achieve by working out, such as weight loss and building muscle, the findings from Freeletics, the fitness app, show fitness is key for general self-development and leading a goal-oriented life.

Four members of the American Sportfishing Association (ASA) were elected to fill two at-large seats and two regional seats on the board of directors.

NRI Distribution has hired Jason Brooks as general manager, NRI East. Brooks will be based in Montreal and lead NRI’s East Coast operations.

Bridgestone Golf, a manufacturer of golf balls, clubs and accessories, has appointed Dan Murphy as president and CEO.

The Finish Line Inc. and JD Sports Fashion Plc announced that they have completed their merger.

Untuckit, the apparel brand, announced the company’s newest investor, Drew Brees, the quarterback of the New Orleans Saints and entrepreneur.

Ebay kicked off the company’s first-ever community sneaker drop, inviting enthusiasts everywhere to list their most coveted pairs. As part of the drop, select styles at special pricing will be able to purchase direct from Adidas, Stadium Goods and Reebok, all with free shipping.

Sport Town in Spokane, WA, is closing by the end of July.

Sports Page, the sporting goods store in Altoona, IA, will close at the end of August, according to a report from the Des Moines Register.

Converse has tapped IPG Mediabrands-owned Initiative to handle the company’s global media planning and buying, according to Advertising Age.

Revolve, the Los Angeles-based high-end apparel e-tailer, is planning an initial public offering of shares for late 2018, according to various reports.

In response to the Trump Administration’s plans to implement a 25 percent tariff on imported Chinese goods, RILA said in a statement, “The Administration promised ‘maximum pain on China, minimum pain on American consumers,’ but America’s families and farmers will be the ones hurt most by these tariffs.”

In response to the new round of tariffs announced by the Trump Administration, NRF’s President and CEO Matthew Shay said, “These tariffs won’t reduce or eliminate China’s abusive trade practices, but they will strain the budgets of working families by raising consumer prices.”

In an e-mailed note to members, Rich Harper, manager of international trade at the Outdoor Industry Association (OIA), said the organization was pleased that apparel, footwear and travel goods were not included in the retaliatory tariffs announced by President Trump on June 15.

Lululemon Athletica announced that, on June 21, the company will donate 100 percent of profits from the company’s in-store and online sales to benefit non-profit groups that increase access to yoga and meditation for communities that face barriers to well-being.