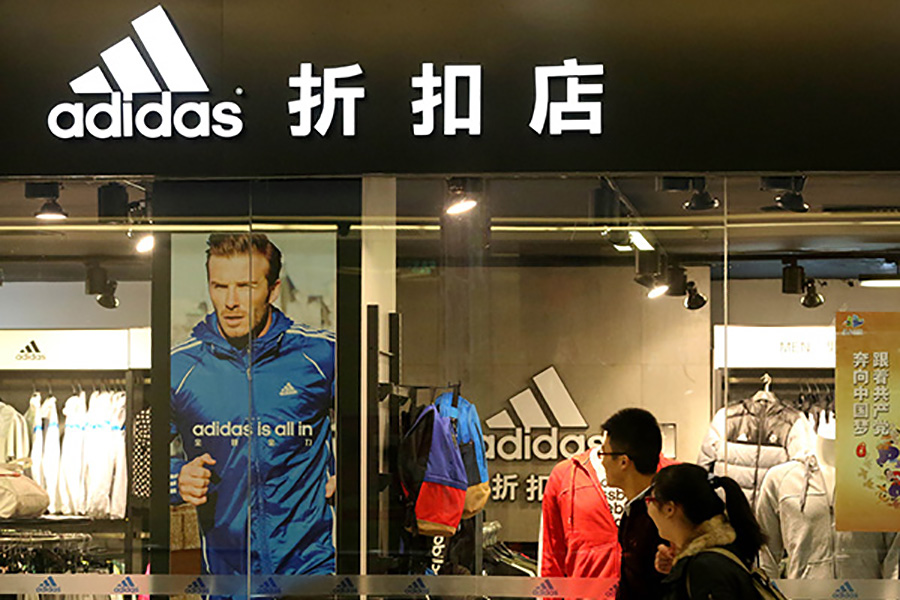 Adidas said it expects first-quarter sales to fall more than 10 percent as revenues in Greater China tumble between €0.8 billion and €1.0 billion below the prior-year level due to the coronavirus outbreak. The guidance assumes a decline of about €100 million in Japan and South Korea while the rest of the world grows at a currency-neutral 6 percent to 8 percent.

Adidas warned last month its business in the greater China area had dropped by about 85 percent year-on-year in the period since China’s Lunar New Year on January 25.

Excluding the impact from the virus, Adidas forecast currency-neutral sales to increase by between 6 percent and 8 percent for the full-year and for its operating margin to rise by between 10.5 percent and 11.8 percent.

The company provided its guidance while reporting currency-neutral sales rose 10 percent in the fourth quarter and 6 percent the year.

“In 2019, we proved our resilience and delivered a strong year yet again. We recorded revenue increases across all regions and our direct-to-consumer business grew double-digits driven by e-commerce, one of our strategic growth areas,” said Kasper Rorsted, Adidas CEO. “In 2020, we will stay focused on the execution of our strategy to bring ‘Creating the New’ home and aim for a sixth consecutive year of double-digit bottom-line growth. Following the outbreak of the coronavirus, our business in Greater China has experienced a significant negative impact since the Chinese New Year. As the situation keeps evolving, we cannot yet reliably quantify the magnitude of the overall financial impact in 2020. Regardless of the impact on our business, it remains our top priority to ensure the health and safety of our employees and their families.”

Currency-neutral sales increase 6 percent in 2019
In 2019, Adidas delivered another year of robust top-line growth with currency-neutral revenues increasing 6 percent, despite supply chain shortages which the company had experienced following a strong increase in demand for mid-priced apparel. The company’s sales increase was driven by a 7 percent improvement at brand Adidas, reflecting high-single-digit sales growth in Sport Inspired as well as a mid-single-digit gain in Sport Performance. The Reebok brand returned to growth in 2019, with currency-neutral revenues up 2 percent versus the prior year. This increase was driven by double-digit growth in its home market North America. From a channel perspective, the company’s top-line increase was largely driven by 18 percent growth in direct-to-consumer revenues with strong support from e-commerce, where revenues grew 34 percent to almost €3 billion in 2019. Direct-to-consumer, including e-commerce, now accounts for one-third of the company’s total business (2018: 30 percent). In euro terms, the company’s revenues grew 8 percent to €23.640 billion (2018: €21.915 billion).

Revenue increases in all market segments with Europe returning to growth
From a market segment perspective, the top-line expansion in 2019 was driven by growth in all regions. The combined currency-neutral sales of the Adidas and Reebok brands continued to expand at double-digit rates in both Asia-Pacific (10 percent), driven by a 15 percent increase in Greater China and Emerging Markets (13 percent). North America’s currency-neutral revenues were up 8 percent, despite the supply chain shortages which weighed on the region’s growth in the first half of the year. Currency-neutral revenues in Latin America were up 7 percent, and sales in Russia/CIS increased 8 percent despite tough prior-year comparisons related to the 2018 FIFA World Cup. Europe returned to growth with a currency-neutral sales increase of 3 percent as strategic measures showed the planned effects.

Net financial result and tax rate decrease
Financial income increased 11 percent to €64 million in 2019 (2018: €57 million), while financial expenses were up 253 percent to €166 million compared to €47 million in 2018. This development was mainly due to higher interest expenses related to the first-time application of IFRS 16. As a result, the company recorded a net financial result of negative €102 million, compared to positive €10 million in 2018. The company’s tax rate decreased 3.1 percentage points to 25.0 percent in 2019 (2018: 28.1 percent).

Net cash position of €873 million
Net cash at December 31, 2019, amounted to €873 million, compared to net cash of €959 million in 2018, representing a decrease of €86 million compared to the prior year. This development was driven by cash generated from operating activities, which was more than offset by the utilization of cash for the purchase of fixed assets as well as the dividend paid to shareholders and the repurchase of Adidas AG shares.

Strong focus on driving shareholder returns
As a result of the strong operational and financial performance in 2019, the company’s strong financial position, as well as Management’s confidence in Adidas’ short- and long-term growth aspirations, the Executive and Supervisory Boards, will recommend paying a dividend of €3.85 per dividend-entitled share to shareholders at the Annual General Meeting on May 14, 2020. This represents an increase of 15 percent compared to the prior-year dividend (2018: €3.35) and a payout ratio of 39.2 percent of net income from continuing operations based on the number of shares outstanding as at the date of preparation of the consolidated financial statements (2018: actual payout ratio of 38.9 percent). This is within the target range of between 30 percent and 50 percent of net income from continuing operations as defined in the company’s dividend policy. In addition, Adidas continues its multi-year share buyback program launched in March 2018. In the first two tranches, a total of €1.8 billion was successfully deployed until the end of 2019. As part of the third tranche, Adidas plans to again repurchase own shares worth up to €1.0 billion in 2020.

Double-digit growth across most markets
On a currency-neutral basis, the combined sales of the Adidas and Reebok brands were driven by double-digit increases in the company’s strategic growth markets Greater China (18 percent) – leading to the growth of 13 percent in Asia-Pacific – and North America (10 percent). In addition, the company also recorded double-digit growth in Latin America (22 percent), Europe (14 percent) and Emerging Markets (13 percent). Currency-neutral revenues in Russia/CIS (6 percent) increased at a mid-single-digit rate.

Gross margin decline consistent with full-year outlook
In line with the company’s expectations, gross margin decreased 3.2 percentage points to 49.0 percent (2018: 52.2 percent) in the final quarter of the year, as negative currency effects and a less favorable pricing mix more than offset positive effects from lower sourcing costs as well as a better product and channel mix. Other operating expenses were up 2 percent to €2.694 billion (2018: €2.645 billion). As a percentage of sales, other operating expenses decreased 4.4 percentage points to 46.1 percent (2018: 50.5 percent). The company’s operating profit rose to €245 million from €129 million in 2018, representing an operating margin increase of 1.7 percentage points to 4.2 percent (2018: 2.5 percent). Net income from continuing operations increased 94 percent to €181 million (2018: €93 million). This includes a negative impact from the adoption of IFRS 16 of €25 million. Basic EPS from continuing operations were up 97 percent to €0.92 from €0.47 in 2018, including the IFRS 16 impact. Losses from discontinued operations amounted to €15 million compared to gains of €15 million in the prior-year period. As a result, net income attributable to shareholders increased to €167 million (2018: €108 million), resulting in basic EPS from continuing and discontinued operations of €0.85, compared to €0.54 in 2018.

Bottom line to once again grow at double-digit rate
In 2020, the gross margin is forecast to decline slightly compared to the prior-year level of 52.0 percent. The gross margin development will be significantly burdened by the adverse impact of unfavorable currency developments as well as negative effects from higher sourcing costs. These headwinds will largely be compensated by a better channel mix as well as normalized use of air freight after last year’s supply chain shortages were successfully mitigated. The anticipated slight decline in gross margin is expected to be more than offset by leverage on other operating expenses and the company’s operating margin is hence projected to increase between 0.2 percentage points and 0.5 percentage points to a level between 11.5 percent and 11.8 percent. This, together with the continued top-line growth, is expected to drive a double-digit-rate improvement of the bottom line. Net income from continuing operations is projected to increase to a level between € 2.100 billion and € 2.160 billion, reflecting an increase of between 10 percent and 13 percent compared to the prior-year level of € 1.918 billion.

Outlook for 2020 does not reflect the impact of the coronavirus outbreak
The company’s outlook for 2020 as outlined above is subject to change as it does not reflect the impact of the coronavirus outbreak. Adidas has a dedicated task force team in place to assess the situation, develop mitigation actions and ensure the health and safety of its employees, which remains the company’s number one priority. Adidas already implemented a number of measures, including temporary closures of office locations and stores as well as travel restrictions. The company will continue to provide close guidance to employees and take all appropriate steps to protect them as the situation develops.

While the company’s business in Greater China performed strongly in the first three weeks of 2020, the company has been experiencing a material negative impact on its operations due to the outbreak of the coronavirus since then. As a result of a significant number of store closures — both owned and partner-operated — and a pronounced traffic reduction within the remaining store fleet, revenues in Greater China have been around 80 percent below the prior-year level between Chinese New Year on January 25 and the end of February. Since then, the company has started to experience a slight improvement in its Greater China business activity, with stores and warehouses gradually opening and consumer traffic slowly picking up. Since the coronavirus outbreak, Adidas has been working closely with its wholesale partners to ensure inventory levels remain healthy in the market. This resulted in the cancelation of all shipments in February and could lead to the acceptance of a significant amount of product takebacks, which the company plans to clear through its own channels throughout the remainder of the year. Based on the latest information available, the company expects revenues in Greater China, in the first quarter of 2020, to be between €0.8 billion and €1.0 billion below the prior-year level. Consequently, operating profit in Greater China is anticipated to decline between €0.4 billion and €0.5 billion in the first quarter. In addition, the company has started to observe traffic declines with a corresponding negative business impact in Japan and South Korea. While the company’s supply chain has also been facing disruptions, the majority of factories in China are operational again and global sourcing activities have not been impacted so far.

As the situation keeps evolving, the further recovery in Greater China, the extent of spillover into other countries as well as the availability of raw materials remain largely uncertain. In light of these uncertainties, the overall impact of the coronavirus outbreak on the company’s business in 2020 cannot be quantified reliably at this point in time. Despite the temporary challenges posed by the coronavirus outbreak, the company remains fully confident about its future growth prospects thanks to its healthy fundamentals and its strong positioning within an attractive industry.