Adidas AG lowered its 2015 long-term growth forecast for sales at the Reebok brand, to €2 billion from a €3 billion target set in November 2010. Adidas cited the loss of a contract to supply National Football League apparel, revised reporting of ice hockey-related license sales and a focus on “margin and operational efficiency.” At the same time, growth rates were raised for the Adidas Brand and its Other Businesses segment, including TaylorMade-Adidas Golf.

The updates were provided at an investor event at the TaylorMade-Adidas Golf Headquarters in Carlsbad, CA. At the event, Herbert Hainer, Adidas Group CEO, confirmed and reinforced the Adidas Group’s long-term financial targets as outlined in its strategic business plan “Route 2015”. Until 2015, the Adidas Group wants to achieve global sales of €17 billion and a sustainable operating margin of 11 percent.

“We have made great progress since we introduced our Route 2015 ambitions in November 2010. Everything I have seen over the past 20 months has only reinforced my confidence that Route 2015 will be an overwhelming success. While the first two years of our execution were marked by exceptional sales momentum we will now focus and deliver even stronger on improving the profitability of our Group,” commented Herbert Hainer.

The Adidas brand will continue to be the engine of the Adidas Group with projected 2015 sales of €12.8 billion. This marks a 5 percent increase from the original target of €12.2 billion announced in November 2010. The Adidas Sport Performance sales target is now €8.9 billion (up from €8.5 billion) as record-breaking football sales, tremendous momentum in basketball and an unprecedented product pipeline in running provide a strong backbone for future growth. Adidas Sport Style is expected to grow to €3.9 billion (up from €3.7 billion) due to the unmatched global resonance of Originals with the lifestyle consumer and solid momentum in the Adidas NEO label.

Based on the outstanding performance of TaylorMade-Adidas Golf, Other Businesses (TaylorMade-Adidas Golf, Rockport, Reebok-CCM Hockey) will achieve their Route 2015 goals already in 2012 and are therefore now expected to contribute € 2.2 billion (up from € 1.8 billion) in sales by 2015. Mark King, President of TaylorMade-Adidas Golf: “The development of our golf business is phenomenal. We are already by far the biggest golf company in the world and continue to go from strength to strength with a lot of innovative products and concepts still to come.”

At the Reebok brand, the Adidas Group will continue to position Reebok as the fitness brand that caters to all major fitness categories, whether it is group activities such as CrossFit, fitness running, gym, yoga or dance. Going forward, the global marketing organisation of Reebok will be organised in Business Units that build products and concepts for these respective fitness categories and for Classics. Following the strategic decision not to renew the previous NFL licence, a change in reporting of NHL-related licence sales and the Group’s focus on margin and operational efficiency, Reebok’s 2015 sales target is now reduced to €2 billion from €3 billion (about one third of the reduction relates to NFL- and NHL-related sales). Matt O’Toole, Chief Marketing Officer of Reebok: “Our razor-sharp focus on fitness will allow us to capture the hearts and minds of all fitness enthusiasts worldwide. Our new category structure will already bring more focus and a deeper product offering and will provide better commercial opportunities as we turn the corner into 2013.”

The Group’s three key attack markets North America, Greater China as well as Russia/CIS are expected to contribute 50 percent of the Group’s sales growth within the strategic business plan Route 2015. In North America, the Adidas brand currently enjoys strong momentum, with 2012 set to be the third consecutive year of delivering double-digit sales growth, fuelled by Adidas Originals, basketball, American football and running. Patrik Nilsson, President of Adidas North America: “We have almost doubled our market share in the last three years by focusing on the next generation athlete. But this is just the beginning. This market continues to offer huge potential to us.” Lawrence Norman, Adidas Vice President of Global Basketball: “The strong double-digit momentum we are generating in basketball is a key image driver for our Adidas brand in North America. And not just here, we are also enjoying double-digit success in the other regions of the world.” To highlight the importance of the category, participants at the event were also joined by NBA All-Star Dwight Howard from the Los Angeles Lakers who shared his experiences with the Adidas brand.

For the full year 2012, the Adidas Group continues to forecast new record sales and earnings. Currency-neutral sales are projected to increase at a rate approaching 10 percent versus 2011, with earnings per share to grow 15 percent to 17 percent (€770 million to €785 million). The Adidas Group’s operating margin is forecasted to increase to a level approaching 8 percent.

Hainer commented: “By leveraging quality growth to generate higher-margin sales and keeping tight control of our operating expenses, we are confident to add approximately 1 percentage point to our operating margin per annum starting in 2013  showing clearly that we are on track to reach our 11 percent operating margin goal by 2015. The Adidas Group has never been in better shape and as we journey on Route 2015 we will continue to unlock significant value by sustaining our legacy as a global powerhouse in the sporting goods industry.” 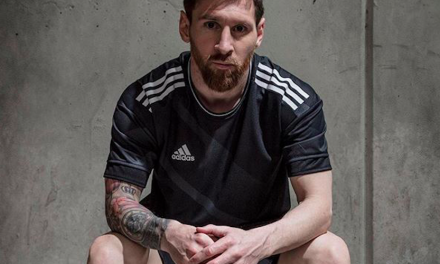