Accell Group’s Profit up 9% in First Half

The fitness division, which Accell Group has streamlined in recent years, booked an increase in sales in the first half. Margins developed well at all product groups.

Sales geographically per product group were as follows in millions of euros:

In the Netherlands, the long winter and the bad weather in May affected sales, in particular traditional bicycles. Also, there was a shift towards bicycles for special target groups. The sales of
electric bicycles to consumers increased by approximately 10%. Due to inventory reductions by dealers, Accell Group supplied dealers with less electric bikes than in the first half of 2009. The sales of repair parts rose substantially. Many consumers who did not buy a new bicycle had their existing bicycles repaired. Sales were in line with general
market developments.
Turnover increased in Germany, due in part to the acquisition of Batavus importer Bäumker in January of this year. The sales of electric bicycles were up in Germany because this product is relatively new to this market compared with the Netherlands. The sales of the innovative sports bicycles of Ghost, Hai Bike and Winora also increased. The turnover in bicycle parts & accessories developed well in Germany and France (from Germany).
Sales of the French top brand Lapierre were up, primarily due to exports. The turnover in bicycles and bicycle parts for commercial city projects fell in the first half of this year, because there were
relatively few new projects.

In Scandinavia, the integration of Tunturi and Hellberg, which Accell Group acquired in June 2009, is virtually complete. The integrated organisation will make it easier for these companies to market
their products. The bicycles of the acquired Hellberg (Nishiki brand) will also be sold in the Netherlands and Germany. Accell Group is currently examining further export possibilities for this brand.
Sales of bicycles in Scandinavia, Austria, Spain and the UK increased significantly in the first half of 2010.
Turnover at SBS in North America rose primarily on the back of increased sales of the BMX brand Redline. The downturn in the sales of bicycles in North America seems to have come to an end.
There is enormous interest in cycling and consumers are also buying new products.

On 13 July 2010, it was announced that the European Commission will be investigating the effect of the current anti-dumping measures imposed on the import of bicycles from China. These measures
are based, among other things, on an ordinance that lapsed on 15 July of this year. The current (antidumping) rates will not be adjusted during this investigation, which could last 12 to15 months).

The activities of Accell Group’s own distributors in the UK and Germany
were transferred to independent third party distributors in the first half of 2010. This has further reduced cost levels and inventories of the fitness division. Most employees of those distributors have
moved to the new organisations.

The fitness division still has own distribution organisations in the
Benelux, Scandinavia and North America.

The operating result came in at € 35.4 million, up from € 34.3 million in the first half of 2009, which translates into an operating
margin (EBIT) of 10.3%, unchanged from the year-earlier period.
Interest expenses were down 29% as a result of lower interest rates and a lower use of bank credit.Taxes increased compared with the previous year, to € 8.8 million. The average tax burden fell to
26.7%, from 28.0% in 2009.

Price Increases
In recent months, the exchange rates of the US dollar and Japanese Yen have changed considerably. Accell Group’s policy to charge on increases in the cost of materials, currency and other costs in the
sale prices of the new season remains unchanged. Accell Group expects to be able to limit price increases per product to 10% in most cases as a result of adaptations to the product specifications and
active cost controls. The market has been informed of same.

Forecast
Based on the current market conditions and barring unforeseen circumstances and economic conditions, for the full year 2010 Accell Group expects a higher turnover and an increase in net profit of approximately 5-10%. Further guidance will follow at the publication of a trading update on 16 November 2010.
Accell Group is active internationally in the mid-range and higher segments of the market for bicycles, bicycle parts & accessories and fitness equipment. The group is market leader in Europe in the bicycle market. Accell Group operates close to the market and largely because of its high added value and numerous innovations, sells primarily via the specialist retail trade.

Sales Turnover is distributed across the company’s key markets as follows: the Netherlands 41%, Germany 25% and France 10%. Other
European countries, including Belgium, Denmark, Finland, Austria, Spain and the UK, account for 17% of turnover. The remaining 7% of turnover comes from countries outside Europe, including the US and Canada. 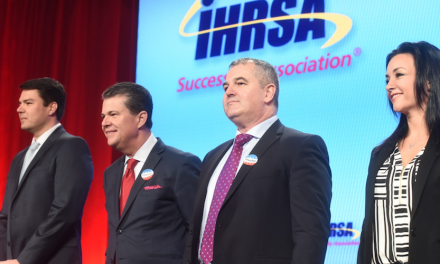 IHRSA Board Of Directors Names New Chair And Members