Nike incurred the wrath of social media for not coming out with special uniforms on Christmas Day for the first time in five seasons.

Nike didn’t provide a reason for not coming out with jerseys for the day. “We won’t have anything formal,” a Nike spokesman confirmed to SBNation.

Nike took over for Adidas at the start of this season and has also made headlines for its new NBA jerseys ripping apart on a half dozen players, including LeBron James, during October and November.

Wrote Yahoo Sports, “In 2012, the monochromatic “Big Color” jerseys drew ire. The next Christmas, “Big Logo” jerseys drew a positive reaction. Most recently, the festive font uniforms were a smash hit. This year, Nike treated NBA teams like kids on a naughty list and didn’t even present them with new designs. Predictably, criticism has been sharp.” 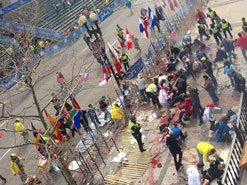