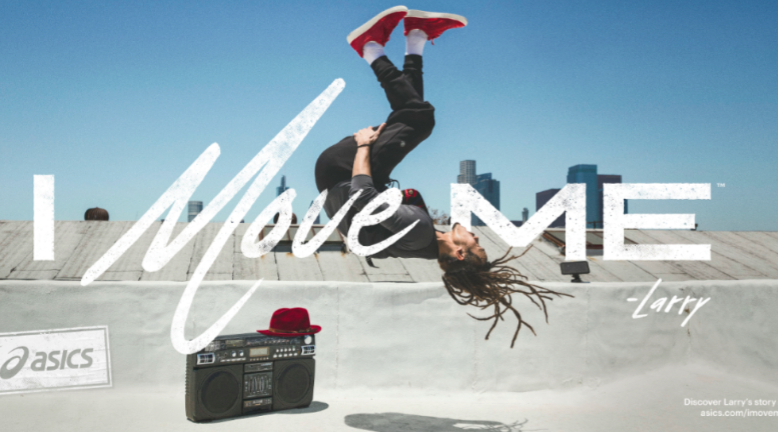 The refresh kicked off in London with the aim of getting the world moving, one city at a time.

“This marks an important milestone for Asics as the brand sets out to communicate a contemporary expression of its founding vision and philosophy to a new generation of consumer; to bring people together and inspire them to be healthy, happy and energized through sport,” Asics said in a statement.

The new brand identity, developed in conjunction with Bruce Mau Design, is the most significant brand refresh Asics has undertaken since the introduction of the Asics Spiral logo in 1992. The hero brand message, I Move Me, taps into Asics 70-year philosophy of the correlation between a sound mind and a sound body, and has been designed to inspire people of all ages and abilities to move more to enjoy the physical and mental benefits of exercise.

The I Move Me creative, developed by Saatchi & Saatchi L.A., is being unveiled across London from July 31 across OOH and in stadium signage coinciding with the 2017 International Association of Athletics Federations (IAAF) World Championships, of which Asics an official partner. The creative will then be rolled out internationally. The impactful key visuals and social content champion real people who demonstrate the positive impact movement has on their lives.

The initial launch coincides with the opening of Asics’ largest flagship store worldwide on Regent Street, London, on August 2. The new store will enable consumers to experience all four of the Asics brands under one roof for the first time.

“Over the past 70 years, we have built a powerful brand on a purpose that is literally engrained in our name; Anima Sana In Corpore Sano, a sound mind in a sound body. Now we are proud to be able to bring that purpose to life in a marketing refresh,” explained Paul Miles, senior general manager, global marketing division, Asics Corporation. “This is one of the most integral brand exercises we have ever executed with an inclusive creative concept that brings the brand and our consumers together unlike anything we’ve ever done before. It’s an approach with a purpose that we truly believe in, its more than just a brand campaign, it’s a mission to get people moving.”

The refresh is further brought to life in a fully integrated consumer communications campaign that brings the brand vision closer to consumers. #IMoveLondon is the first of many local manifestations of the I Move Me initiative in London. The campaign taps into local research analyzing the positive impact movement can have overcoming the stresses of an urban lifestyle.

Seb Coe, IAAF President says, “With the IAAF World Championships coming to London from 4th to 13th August, it’s more important than ever to get the host city moving more. We’re extremely excited to work with Asics on a campaign that will encourage Londoners to positively disrupt their everyday with exercise – even long after the Championships have finished.”

I Move London Videos can be viewed at the following links: