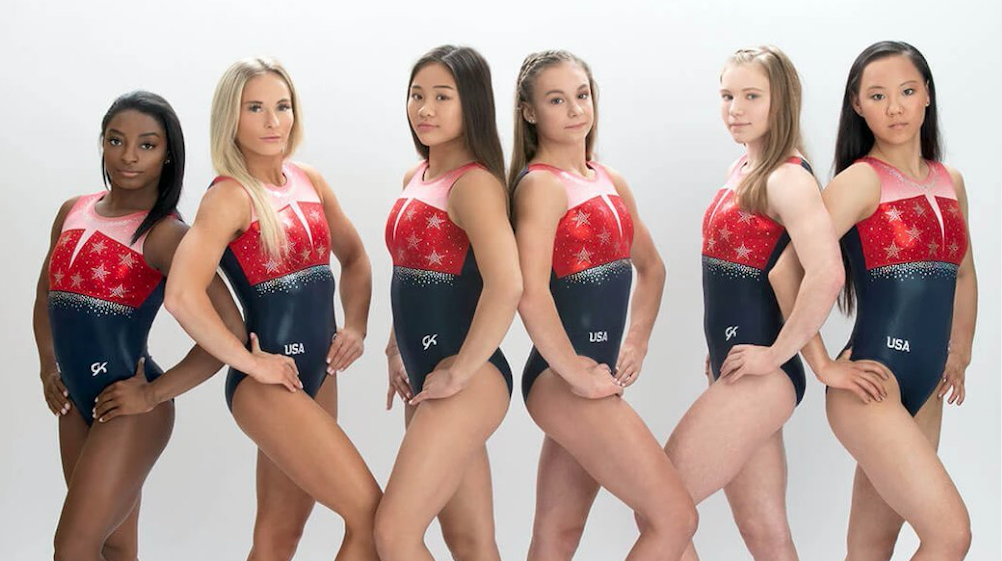 Based in Reading, PA, GK design and manufactures gymnastics uniforms right in the U.S.

“We are honored to be the U.S. National Team apparel partner. We pride ourselves here at GK for our passion and commitment to excellence that goes into each garment. We are excited to showcase our talents for design, fit and quality to the world on a global stage this year at the 2019 World Championships, and next year in Tokyo,” Says Girisha Chandraraj, president and CEP of Elite Sportswear.

Each of the U.S. women’s leotards revealed to-date was crafted using a glue and zigzag construction technique and an innovative mix of machine-set and handset Swarovski crystals.

The leotard worn by the gold medal U.S. Women’s World Team, including the most decorated female gymnast and GK ambassador Simone Biles, during team finals features a stunning red, white, and blue design inspired by the American flag, and is adorned by a remarkable 2,875 clear Swarovski crystals.

The leotard worn by the American women during qualifications late last week was adorned with 2,834 Swarovski crystals in diamond and round shapes on a periwinkle pearl mystique three-quarter sleeved leotard inspired by opulent evening wear.

The blue leotard worn by the American women during the podium training features 2,654 Swarovski diamond and round stones applied to imitate regal necklaces.

The men’s competitive wear, which was revealed at today’s team finals, features a commanding red, white, and blue design.

A limited-edition commemorative replica of the women’s team finals leotard and a replica of the men’s competitive shirt worn today are available for purchase along with replicas of the women’s leotards worn during the qualification round and podium training, while supplies last, at www.gkelite.com. Two additional women’s leotard replicas will be available for purchase at www.gkelite.com once they are revealed in competition.