Pro-forma revenues were up 5.5 percent, led by double-digit gains at Sperry Top-Sider, Keds, Saucony, and Harley-Davidson Footwear. The one shortfall was Merrell, which saw a low double digit revenue decline, dragged down by a lack of a Spring selling season this year, ongoing weakness in its active lifestyle category, and timing issues.

Excluding acquisition-related transaction and integration expenses, fully diluted EPS in the quarter ended June 15 were 46 cents a share, substantially ahead of the company's previous guidance of 31 to 35 cents a share and a 12.2 percent increase compared to the prior year's adjusted earnings.

In the Performance Group, reported revenues rose 33.8 percent to $199.7 million due to the addition of Saucony, but pro-forma sales were down 4.8 percent.

On a conference call with analysts, Blake Krueger, Wolverine’s CEO and president, noted that Merrell had been expected to face a challenging second quarter, with the high single digit revenue increase in the first quarter driven by the launch of the M-Connect collection. He also noted that Merrell
continues to gain market share against competitors within the outdoor space, and remains the category leader in outdoor footwear with market share eclipsing 18 percent over the last 12 months.

But the second-quarter decline stemmed from a number of factors, including a shift of EMEA shipments, some to Q1 and some to Q3, as its international distribution partners partially altered their receipt timing. The brand also faced, according to Krueger,  “the well document contraction in the outdoor footwear segment of the industry, coupled with a virtually non-existent Spring in all of our own markets.”

Finally, U.S. sales declined in large part due to decreased sales in the discount channel from lower available inventory and custom programs that were not anniversaried.

Only partly offsetting these factors were solid reorders for M-Connect product and “continued great performance from core outdoor programs such as the MOAB Series,” said Krueger.

Specifically in the outside athletic category, M-connect “continues to be a bright spot for the brand and is certainly exceeding our expectations, achieving high double digit growth in the second quarter.” Krueger pointed to SportsScanInfo data that showed that Merrell maintained in the Top 3 position in the minimalist lightweight category in the specialty retail channel over the last 12 months.

Merrell's active lifestyle category “has been weaker over the past several quarters,” although Merrell’s brand development team has been restructured, including recently appointing a new head of product creation, and the line has been overhauled. Previews of Spring/Summer 2014 offerings with key domestic and international partners “has been very positive,” and Merrell’s current order backlog position is up high single digits.

“We remain very bullish on Merrell and still plan to deliver a low single digit revenue increase for the full year as well as more robust growth in 2014,” said Krueger. “Merrell is a double digit growth brand and the steps we're taking now will help the brand achieve this growth level within the next couple of seasons.”

Among other brands in the Performance Group, Saucony’s double-digit gains were particularly helped by strength in the US market, driven by introductions including the “very successful” Kinvara 4, according to Don Grimes, SVP and CFO, on the call. He noted that most recent market stats show Saucony is the fastest growing footwear brand in the run specialty channel.

In its Lifestyle Group, sales were $255.2 million, up from only $28.5 million a year ago, reflecting the addition of Sperry, Stride Rite and Keds brands. On a pro-forma basis, sales were up 20 percent, led by “very strong double digit growth,” at Sperry.

Krueger said Sperry delivered “very strong double digit growth” in women's, driven by both boat and casual product, while men’s also accelerated its strong momentum from Q1 across all categories. Said Krueger, “Our key retail partners around the world, especially in the US remained very bullish on the brand.”

Hush Puppies revenue growth for Q1 was about flat as “solid growth” in the US and revenue gains in both Latin America and Asia Pacific was offset by challenges in the EMEA, particularly the U.K.

The Heritage Group – consisting of Harley-Davidson, Wolverine, CAT footwear, Bates, Cat Footwear and HyTest – had revenue of $110.6 million, 0.8 percent on both a reported and pro-forma basis. While Harley-Davidson led the group, the Wolverine brand delivered low single digit growth on the strength of its lifestyle product offerings, partly offset by declines in the US work segment. CAT footwear grew in the mid single digits.

The PLG acquisition delivered a better than expected 24 cents per share of earnings accretion in the quarter. The stronger than expected accretion was driven by better-than-planned revenues, particularly for Sperry, some of which is timing related; better than expected gross margin driven by favorable brand and channel mix, lower incremental ongoing operating cost, slightly lower interest expense, and delays in certain marketing initiatives and headcount adds expenses that will now hit the back half of the year.

Regarding the merger, Krueger said the integration “has gone extremely well, above and beyond my highest expectations, and excluding the couple of systems projects is substantially complete.”

Among its previously-cited initiatives around the merger, Sperry Top-Sider, Saucony and Keds are all well on their way to increasing their international presence. Almost 20 distribution agreements were signed and executed almost with its acquired brands in key growth markets and another 15-20 programs will come online in the back half of 2013.

The company also is expanding its consumer direct efforts for each of the brands. Sperry, for example, now counts 41 retail stores, 26 of those being concept specialty stores with the expectation for 50 total stores by year-end. A minimum of 100 stores is expected within the next couple of years “with even faster expansion for e-commerce,” said Krueger.

Finally, he said Keds had “suffered from a high rate of leadership change and an inconsistent strategic direction,” in past years, but a new team dedicated to focusing the brand on teen girls and young women is making significant progress. Said Krueger, ”While we're still in the early implementation stables of this strategic plan, the early reads are simply terrific.”

The new EPS outlook represents earnings growth between 13.5 percent and 20.1 percent on an adjusted basis this year. The PLG acquisition is now expected to be accretive to full year earnings in the range of 55 cents to 65 cents per share, up from the previous expectation of 40 to 50 cents. 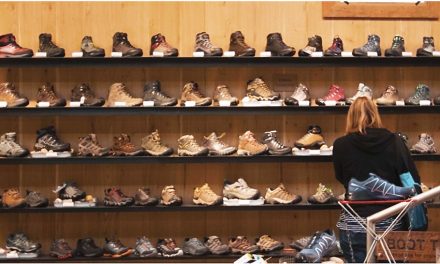 REI To Furlough Most Retail Employees For 90 Days