VF Corp. reported second-quarter revenues rose 15.4 percent to $1.84 billion from $1.59 billion in
2010. All VF coalitions achieved double-digit revenue increases in the
quarter, with the strongest growth in Outdoor & Action Sports, where
revenues increased 23 percent. Earnings rose 20.3 percent. The company also raised its guidance for the year.

Among other coalitions, Jeanswear and Sportswear revenues each grew by 10 percent, Imagewear revenues rose 16 percent, and Contemporary Brands revenues were up 11 percent.

Gross margin declined, as anticipated, to 45.9 percent from 47.1 percent in the 2010 period, reflecting the impact of higher product costs. Gross margin in the quarter also included a 65 basis point benefit from the gain on the closure of a European jeanswear facility; this gain was anticipated and reflected in previously provided full year gross margin guidance. Operating margin was 10.3 percent compared with 10.6 percent in the 2010 period.

“With double-digit revenue growth in all coalitions, and in both our international and direct-to-consumer businesses, VF is firing on all cylinders,” said Eric Wiseman, Chairman and Chief Executive Officer. “Our marketing investments continue to fuel outstanding growth, our brands are gaining momentum — and we are confident that this momentum is sustainable.” He continued, “The signing of a definitive merger agreement between VF and The Timberland Company on June 12th marks a transformational acquisition for VF, and will result in a $10 billion apparel and footwear powerhouse anchored in outdoor and action sports. We look forward to completing the acquisition this quarter.”
Second Quarter Business Review
Outdoor & Action Sports: Outdoor & Action Sports achieved record revenues and operating income in the second quarter. Total global revenues in Outdoor & Action Sports rose 23 percent in the quarter, with Americas revenues rising 14 percent and international revenues up 42 percent (29 percent on a constant currency basis). Nearly all Outdoor & Action Sports brands achieved double-digit growth in the quarter, with the two largest brands – The North Face and Vans – achieving global revenue growth of 21 percent and 22 percent, respectively. VF’s Kipling and Napapijri businesses experienced exceptionally strong growth in the quarter, with revenues up 37 percent and 46 percent, respectively. Total direct-to-consumer revenues for Outdoor & Action Sports rose 22 percent in the quarter, with a 34 percent increase in The North Face(R) direct-to-consumer revenues and a 19 percent increase in Vans(R) direct-to-consumer revenues.

Operating income for the coalition rose by 10 percent. Reflecting a higher percentage of advertising expense to revenues versus the 2010 period, and investments to support the coalition’s seasonally higher second half business, operating margin in the quarter was 12.5 percent compared with last year’s 13.9 percent. The full year coalition operating margin is still expected to approximate 20 percent.

Operating income declined only slightly in the quarter, helped by the gain from the jeanswear facility closure. At 15.4 percent in the quarter, the Jeanswear operating margin remained healthy, though down from the 17.0 percent achieved in the prior year’s quarter, despite higher product costs.
Imagewear: Imagewear had another exceptionally strong quarter, with revenues and operating income both increasing at double-digit rates. Revenues rose 16 percent in the second quarter, driven by a 32 percent revenue increase in its Image (uniform) business, with very strong performance in its Protective Apparel business. VF said Imagewear’s unmatched business model is fueling superior growth this year, and provides it with a competitive advantage that should support its continued momentum.

Operating income rose 55 percent and operating margin continued to strengthen, to 16.5 percent from 12.3 percent in last year’s quarter.
Sportswear: Sportswear revenues rose 10 percent in the second quarter. The 62 percent increase in Kipling revenues in the U.S. was the biggest contributor to growth in the quarter, as the brand continued to expand and gain share. Nautica brand revenues rose 6 percent, with healthy growth in the men’s wholesale sportswear and direct-to-consumer businesses.

Second quarter operating income for the Contemporary Brands coalition increased 30 percent while operating margin improved to 9.1 percent from 7.7 percent.
Expansion in International Revenues
International revenues increased 30 percent (20 percent on a constant currency basis) in the quarter, driven by the 42 percent increase in Outdoor & Action Sports and the 20 percent increase in Jeanswear international businesses. Revenues in Asia were up 30 percent in the quarter, with its The North Face, Vans and Kipling businesses all growing in excess of 25 percent. India is a relatively small but rapidly growing market for VF’s brands, with substantial future revenue potential. During the second quarter, revenues in India continued to show great momentum, rising by over 50 percent in the quarter and nearly 70 percent year to date.
Growth in Direct-to-Consumer Revenues

Direct-to-consumer revenues grew 17 percent in the quarter driven by new store openings, a 40 percent-plus increase in e-commerce revenues, and exceptionally strong comp store growth. The direct-to-consumer businesses of The North Face, Vans, 7 For All Mankind, Napapijri and Kipling brands each achieved solid revenue gains in the period. A total of 29 stores were opened across VF’s brands in the quarter and 44 year-to-date, bringing the total number of owned stores to 808.

“We are bullish on the outlook for our brands as we enter the second half of 2011, and are raising our full year revenue and earnings guidance accordingly,” said Wiseman. “Were continuing to invest behind our strongest growth platforms, and are tremendously excited about adding a new growth platform, The Timberland Company, to our arsenal. We look forward to welcoming both Timberland and Smartwool to VF’s family of brands.”

He noted that the expected accretion to revenues and earnings of $700 million and $.25 per share, respectively, from the pending acquisition is not included in VF’s updated guidance.

Revenues are now expected to rise 12 to 13 percent in 2011, up from previous guidance of approximately 10 percent, reflecting broad-based strength across all our businesses. Accordingly, Outdoor & Action Sports revenues should grow at a high-teen percentage rate, Imagewear revenues should grow at a low-teen percentage rate, and Jeanswear, Sportswear, and Contemporary Brands revenues are each expected to rise at high single-digit rates. In addition, based on the strengthening of our businesses in both Europe and Asia, we now anticipate international revenues in 2011 could increase by more than 20 percent, compared with previous guidance for 15 percent growth, with revenue growth in Asia now expected to exceed 30 percent. Growth in our direct-to-consumer business, another revenue driver, should rise by about 15 percent, better than the 10 to 15 percent growth in previously provided guidance.

The Board of Directors declared a quarterly cash dividend of $.63 per share, payable on September 19, 2011 to shareholders of record as of the close of business on September 9, 2011. 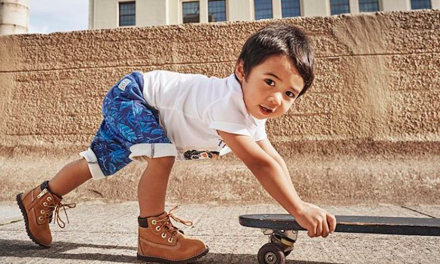 Timberland Looks To Diversify To Grow

POC and Volvo to Demo Collision Avoidance System at CES