Sequential Brands Group, the parent of Avia, And1 and Heelys, reported sales grew 189 percent in the second quarter to $20.2 million compared to $7.0 million in the prior year quarter.

Yehuda Shmidman, Sequential's Chief Executive Officer, commented, “We are pleased to report strong results and continued momentum through the second quarter as we delivered significant revenue growth from our portfolio, fully integrated the Jessica Simpson brand into our platform, and signed a definitive agreement to acquire Martha Stewart Living Omnimedia. Looking ahead, we remain focused on executing our playbook as we aim to exceed our long-term revenue and EBITDA goals.”

For the year ending December 31, 2015, the company is reiterating revenue guidance of $78.0 – $81.0 million with Adjusted EBITDA of $48.5 – $50.5 million. This guidance does not include the pending impact of the acquisition of Martha Stewart Living Omnimedia (“MSLO”). The company's contractual guaranteed minimum royalties for 2015 total more than $63 million. Consistent with the company's historical quarterly results, the company expects revenue for the full year 2015 to be weighted to the third and fourth quarters, with the fourth quarter being higher than the third quarter, due to seasonality in the businesses of many of the company's licensees.

At 11:59 p.m. on July 22, 2015, the 30-day “go-shop” period pursuant to the terms of the previously announced definitive merger agreement under which Sequential agreed to acquire 100 percent of the outstanding shares of MSLO expired. None of the parties contacted by MSLO during the “go-shop” period notified MSLO by the deadline that they would be interested in pursuing an alternative transaction under the merger agreement. The company has caused the filing of a registration statement on Form S-4 related to the acquisition, which includes a proxy statement for the MSLO stockholder meeting. The parties to the merger agreement currently expect to complete the acquisition in 2015 following the satisfaction of customary closing conditions, including adoption of the merger agreement by MSLO's stockholders. 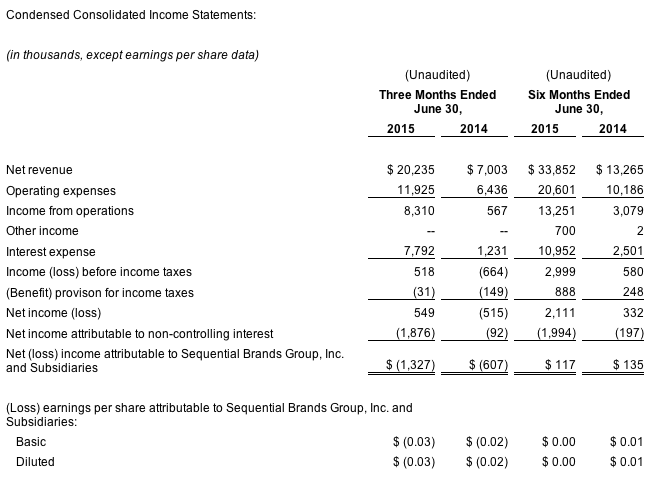