“Second quarter revenue increased 69 percent over the prior year, reflecting the continued execution of our playbook,” said Sequential CEO Yehuda Shmidman. “In addition to being pleased with our financial results, we are excited to have announced several initiatives this past quarter, including the acquisition of the GAIAM brand, the launch of a new e-commerce business for the Martha Stewart brand, and a new partnership with Amazon for Chef Emeril. We are encouraged by the momentum across our business and focused on continuing to deliver strong financial results.” 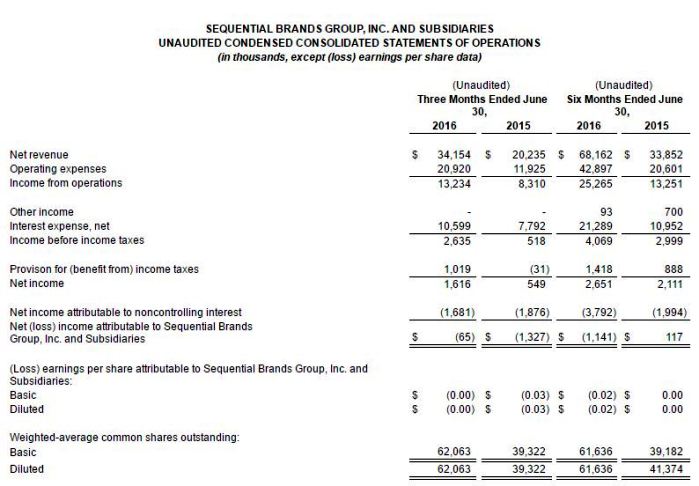 For the year ending December 31, 2016, the company is reiterating its guidance of $155 to $160 million in revenue, GAAP net income of $12.7 to $14.6 million and Adjusted EBITDA of $88.0 to $91.0 million. The company’s contractual guaranteed minimum royalties for 2016 are over $100 million.  Consistent with the company’s historical quarterly results, it expects revenue for 2016 to be weighted to the third and fourth quarters due to seasonality in the businesses of many of the company’s licensees.

Following the completion of the Martha Stewart Living Omnimedia Inc. merger integration, the company expects its twelve-month run rate to be $172 to $177 million of revenue, GAAP net income of $28.5 to $30.1 million and $112 to $115 million of Adjusted EBITDA.  The company anticipates that the merger integration will be completed on schedule.