On Dec. 6 when reporting third-quarter results, Genesco had projected fourth-quarter earnings in the range of $2.17 to $2.27 a share. On Jan. 14, Genesco had said that given quarter-to-date trends, it expected earnings to reach the lower end of the guidance range.

Fiscal 2014 fourth quarter results reflect pretax items of $7.2 million, or 37 cents per share after tax, including $3.0 million of expenses related to deferred purchase price payments in connection with the acquisition of Schuh Group Limited, which are required to be expensed as compensation because the payment is contingent upon the payees' continued employment; and $5.7 million for network intrusion expenses, other legal matters, a lease termination, and asset impairment charges, partially offset by a $1.5 million gain related to the change in accounting for deferred bonuses under the company's EVA Incentive Plan announced by the company in September 2013.  Fiscal 2013 fourth quarter results reflect pre-tax items of $19.2 million, or 52 cents per diluted share after tax, primarily including network intrusion expenses, deferred purchase price expenses and asset impairments, offset by a gain of $0.2 million from the change in accounting for deferred bonuses.

Robert J. Dennis, chairman, president and chief executive officer of Genesco, said, “Our Fiscal 2014 performance reflects a challenging selling environment throughout the year, including the fourth quarter.  While our overall results were lower than we planned, we are confident the fundamentals of our business remain intact.

“The inconsistent sales patterns that characterized last year carried over into the start of Fiscal 2015 with comparable sales down 2 percent through Saturday, March 8, 2014.  Following a difficult first week that was marked by severe winter storms in several of our key markets, comparable sales turned positive and margins have held up. However, we remain cautious in our outlook for the first half of the fiscal year given the lack of a strong new fashion driver in the teen footwear space and continued uncertainty around customer traffic.

“Based on current visibility, we expect adjusted Fiscal 2015 diluted earnings per share to be in the range of $5.40 to $5.55, which represents a 6 percent to 9 percent increase over Fiscal 2014's adjusted earnings per share of $5.09. Consistent with previous guidance, these expectations do not include expected non-cash asset impairments and other charges, which are estimated in the range of $3.1 million to $4.5 million pretax, or $0.08 to $0.12 per share, after tax, in Fiscal 2015. They also do not reflect compensation expense associated with the Schuh deferred purchase price as described above, which is currently estimated at approximately $7.1 million, or $0.30 per diluted share, for the full year. This guidance assumes comparable sales increases in the low single digit range for the full fiscal year.”  A reconciliation of the adjusted financial measures cited in the guidance to their corresponding measures as reported pursuant to U.S. Generally Accepted Accounting Principles is included in Schedule B to this press release.

Dennis concluded, “We believe we have a sound plan in place that balances protecting near-term profitability with investments that bolster our omnichannel capabilities and expand the footprint of our underpenetrated retail concepts.” 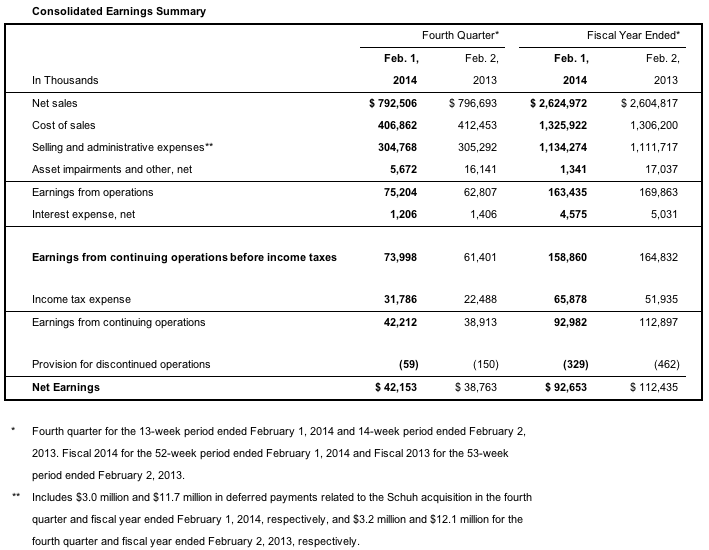