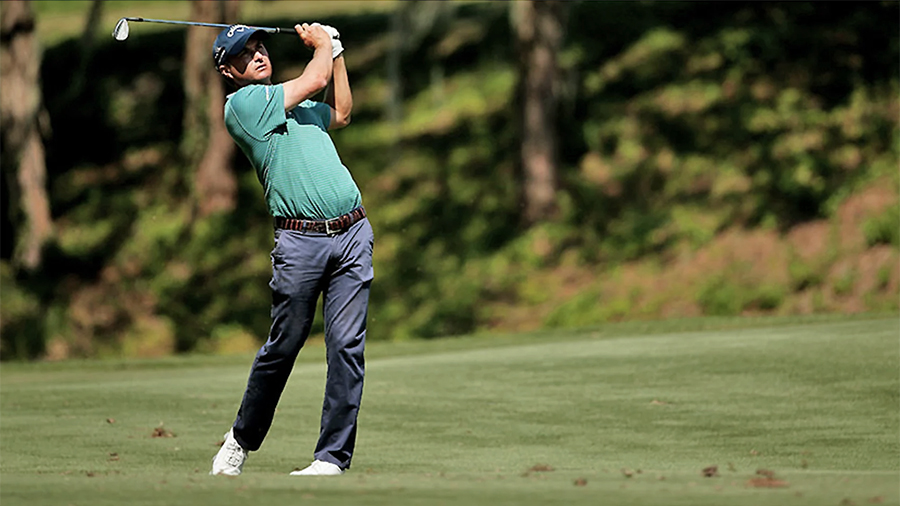 Callaway Golf Company reported strong second-quarter results driven by the continued strength of all three of its business segments. Total net revenue was just over $1.12 billion, up 22.1 percent versus the year-ago Q2 period. Changes in foreign currency rates had a $38.6 million negative impact on net revenues for the quarter ended June 30.

The company, parent to the Callaway, TravisMathew, Ogio, Odyssey, Jack Wolfskin, and Topgolf brands, also saw strength in its bottom line, with GAAP net income increasing 14.9 percent in the quarter. Adjusted EBITDA was up 26 percent on a reported basis.

“These results clearly show continued momentum across all of our business portfolios and leave us in a position of strength as we look to the full year and the long term,” quipped company President and CEO Chip Brewer on the quarterly earnings call with analysts.

Looking at its three business segments, the Golf Equipment segment exceeded expectations, with revenues up 12.6 percent year-over-year to $451.9 million, reflecting the continued high demand for golf clubs and golf balls, coupled with improved supply and restocking at retail. Brewer said the company now expects the business, which includes Callaway and Odyssey equipment, to be up 12 percent or more for the full year, an increase from the approximately 10 percent as previously forecasted.

“As demand continues to remain strong in the key U.S. and Asian markets, supply chain restrictions have abated, and we’re having strong market share performance,” Brewer shared. “In Q2, we also benefited by supplying the launch of our new Jaws Raw wedge slightly earlier than planned. According to Golf Datatech, in the U.S., despite comparatively poor weather conditions this year, second quarter hard goods sell-through was down just 2 percent versus 2021 and remained up 37 percent over 2019.”

Outside the U.S., market conditions reportedly varied during the quarter. Japan was said to be up 5 percent and Korea up 11 percent, while the U.K. and Europe were down approximately 10 percent in the period.

Brewer went on to say that the company benefited from an overall inventory catch-up at retail, consistent with other OEMs, but also in the first half of 2022, like other OEMs, he also believes trade inventory levels “largely normalized to appropriate levels, neither too high nor too low in our opinion.”

The Golf Equipment segment contributed $100.3 million to overall operating income in the quarter but saw operating margins shrink 220 basis points versus Q2 2021 to 22.2 percent of sales.

The Topgolf segment contributed $403.7 million of revenue in the second quarter, a 24.1 percent increase versus the year-ago period. TopGolf also contributed $44.2 million of segment operating income in the quarter, driven by “strong social and corporate events.” Segment operating margins were up 350 basis points to 10.9 percent for the second quarter.

Same-venue revenues were up 7.9 percent for the period. “We continue to experience overall strong demand; some were offset by staffing challenges that continue to impact us, and, as we understand it, the entire restaurant and service industry,” explained Brewer. “To offset this, we’re taking low- to mid-single-digit price increases during this quarter, and we will also be raising select hourly wage rates to ensure we remain competitive and that our hourly playmakers are well taken care of.” He said the company saw no fall-off in demand when it took a similar amount of price at the end of last year.

Looking ahead, Brewer said the company believes that the same-venue sales projection for the balance of the year will be positive mid- to high-single-digits versus 2019. “This would increase our full-year same-venue sales up mid-to-high single-digits, consistent with our previous guidance.”

Topgolf opened two owned and operated Topgolf venues in El Segundo, CA and Philadelphia, PA in the 2022 second quarter and opened its newest venue format in the Seattle metropolitan area last week. Brewer said the new venue format, which it will use in select markets, will add to a cross-brand synergy strategy by including a Callaway-branded fitting studio in the lobby.

Looking forward, ELY plans to open one additional venue in Q3 for a total of two in the quarter. The fourth quarter will be its largest quarter for openings, with six now planned for the period totaling 11 new owned and operated venus plus two franchise international venues for the full year, the most in the company’s history.

The Active Lifestyle segment was said to have had a strong quarter with positive momentum across all brands in that portfolio, which includes TravisMathew, Jack Wolfskin, Callaway, and Ogio apparel, gear, gloves, and bags categories. Revenues for the segment increased 39.2 percent to $260.1 million in the period, primarily driven by a 49.8 percent increase in apparel sales and a 29.0 percent increase in gear and other sales.

All four of the company’s Active Lifestyle brands saw double-digit year-over-year growth in the second quarter. Brewer said the Callaway-branded business in the segment remained strong globally, with its apparel business in Asia performing well and the gear business, namely golf bags and gloves, delivering both market share and revenue increases.

TravisMathew reportedly had “another outstanding quarter, continuing the strong brand momentum and delivering high double-digit growth across all channels.” Brewer said the business remains on track to deliver approximately $300 million in revenue this year and $50 million or more in adjusted EBITDA.

TravisMathew opened three new stores in the second quarter, including its first two stores in New England and one in Ohio. The brand launched TravisMathew women’s in the quarter. Management sees an opportunity, pointing out that over 25 percent of purchases made through TravisMathew’s DTC channels are made by women.

Brewer said the Jack Wolfskin business “continued to make good progress and showed double-digit revenue growth for the quarter despite difficult macroeconomic conditions in China and Europe.” He said the overall brand strength and pre-books “continue to build momentum. We believe this brand is on strong footing and positioned for growth despite the challenges presented via current and anticipated macroeconomic and FX headwinds in Europe.”

The Active Lifestyle segment contributed $22.5 million to overall operating income in the quarter as operating margins increased 30 basis points versus Q2 2021 to 8.7 percent of sales.

Consolidated GAAP net income increased 14.9 percent versus Q2 2021, primarily due to the heightened performance of its operating segments, partially offset by a $15.8 million change in the company’s tax valuation allowance. On a non-GAAP basis, which excludes the change in the valuation allowance, among other items, non-GAAP net income for the quarter was $93.5 million compared to $70.5 million for the comp period in 2021.

Company CFO Brian Lynch said the increase in inventory primarily relates to being under-inventoried in the prior periods due to the supply chain disruptions it experienced last year. “Inventory churns and days inventory in hand are consistent with pre-pandemic levels,” Lynch shared. “We feel very good about the quality of our inventory. As you can imagine, when we were very short on inventory over the last two years during the pandemic, we sold whatever was available and cleaned up any old inventory.”

Callaway revised its full-year 2022 revenue expectations to a range of $3.945 billion to $3.970 billion compared to previous guidance of a range of $3.935 billion to $3.970 billion. Changes in foreign currency rates are estimated to have a negative impact of $129 million for the full year. Lynch said the estimate assumes 12 percent or more revenue growth for the Golf Equipment segment for the full year, up from the prior estimate of 10 percent growth.

Lynch said the guidance assumes approximately $1.56 billion in revenue for Topgolf this year, consistent with previous guidance, and Brewer forecasted that the Active Lifestyle segment is on track to deliver roughly $1 billion in net sales for the fiscal year.

“Our full-year adjusted EBITDA forecast also increased and is now projected to be $555 million to $565 million, which assumes approximately $235 million to $245 million from Topgolf,” explained Lynch. “At the midpoint, this represents a $15 million increase from the previous guidance primarily due to increases in golf equipment and Topgolf segments.”

For the second half, ELY estimates revenue to be within the range of $1.79 billion to $1.15 billion, including an estimated $69 million negative foreign currency impact. “We expect the Topgolf segment to be up approximately 25 percent, driven by same-venue sales in the mid- to high-single-digits and by additional venues with two opening in Q3 and six opening in Q4,” Lynch detailed. “We expect the golf equipment segment to be up low- to mid-single-digits and the Active Lifestyle segment to be up mid-teens for the second half of the year.”

In total, second-half revenues are expected to increase by approximately 15 percent compared to the second half of 2021. The company currently estimates that its second half 2022 adjusted EBITDA will be within the range of $178 million to $188 million versus $153 million in the second half of 2021; this represents an approximate 20 percent increase. “Our business has become increasingly difficult to forecast quarterly as many factors can cause a shift between quarters, including new product launch timing, marketing campaign timing, weather, the timing of venue openings, and timing of supply shipments, to name a few,” explained Lynch.

Total company third quarter 2022 net revenue is estimated to be between $940 million and $955 million versus Q3 2021 net revenues of $856 million. This forecast assumes $42 million of negative foreign currency impact for the third quarter of 2022 compared to 2021. Given the second-half launch timing of Golf Equipment products in 2022 versus 2021, Callaway expects Golf Equipment will be down mid- to high-single-digits for the third quarter but is expected to increase double digits in the fourth quarter, resulting in 12 percent or more growth for the full year.

The Topgolf and Active Lifestyle segments are expected to grow double-digits in both the third and fourth quarters. In total, third quarter 2022 revenue is estimated to grow approximately 11 percent compared to 2021. Given foreign exchange headwinds and differences in product launch timing compared to 2021, the company expects 2022 adjusted EBITDA will decrease in the third quarter but increase in the fourth quarter. Third quarter adjusted EBITDA is estimated to be between $122 million and $132 million versus $139 million for the same period in 2021.

“Looking even further ahead, we will have some headwinds in 2023,” Lynch suggested. “Foreign currency rates are expected to continue to be a headwind, and the hedge gains we have this year are not expected to repeat. We will also not benefit from the channel fill in the golf equipment business this year as retail inventory is generally back to normal levels. With that said, we believe we will continue to benefit next year from new Topgolf venues, as well as continued strong consumer desire for leisure and entertainment such as Topgolf, hiking, golf, and other outdoor activities. We are fortunate that our consumers are generally well off and passionate. As a result, we expect to grow in 2023 despite the current macroeconomic headwinds. In addition, we expect to benefit from the additional pricing and other actions we plan to implement, and we expect freight expense to abate somewhat in 2023.”