Asics Corp. reported robust gains in earnings in the fiscal second quarter ended Sept. 30 but results still fell short of prior forecasts due to lower-than-expected sales in Japan as well as changes in foreign exchange rates.


Net income for the Japanese footwear giant climbed 40.3% to ¥2.07 billion ($24 mm) from ¥1.47 billion in Q2 last year. Operating income was up 4.5% to ¥4.39 billion ($51  mm) from ¥4.20 billion in the year-ago period.  Overall global revenues rose 2.0% to ¥56.99 billion ($664 million) from ¥55.86 billion a year ago.
Revenues in the domestic Japan business was up 2.1% to ¥28.49 billion ($332 mm) versus ¥27.91 billion ($298 mm) in the year-ago quarter.  Operating income in the region was down 4.6% to ¥545 million ($8 mm).
The Americas posted a 15.1% sales increase to ¥16.90 billion ($197 mm) from ¥14.68 billion ($157 mm) in the year-ago period.  Operating profits in the region surged 25.1% to ¥1.32 billion ($15 mm) versus ¥1.05 billion ($11 mm) in fiscal Q2 last year.  In U.S. dollar terms, revenues in the Americas region jumped 26% for the period and operating income increased 36% for the quarter.
In Europe, revenues declined 8.3% to ¥12.19 billion ($142 mm) and operating income slipped 7.5% to ¥1.49 billion ($17 mm).  Asia Pacific revenues jumped 17.9% to ¥6.04 billion ($70 mm) and operating profit surged 47.0% to ¥1.04 billion ($12 mm).
In a statement concerning the six-month year-to-date period, Asics officials said the global economy “recovered at a moderate pace, but conditions remained difficult amid persistently high unemployment rates and concerns that economies such as those of Europe and North America could take a turn for the worse.’
Although the Japanese economy also picked up, owing to a recovery in corporate earnings and a pickup in capital investment, difficult conditions continued due to deflation, the strengthening yen and other factors.
On the positive side, Asics noted that although sporting goods industry conditions “remained challenging,” interest in sports remained at a “high level” due increasing awareness of health consciousness.
“Under these conditions, the Asics Group took actions on a global scale to continue reinforcing and expanding its core running business,” Asics said. This included steps to raise the visibility of the corporate image and reinforce the Asics brand by supporting the Gold Coast Airport Marathon as an official sponsor and supporting the Stockholm Marathon as title sponsor.
Asics also noted that it acquired 100% of the shares of the Swedish outdoor products company Haglöfs Holding AB as well as the sales rep company Agence Québec Plus Ltée in Canada, making these companies consolidated subsidiaries. Asics also noted it is opening Onitsuka Tiger Madrid as a flagship store in Spain.
Looking ahead, Asics sees revenues reaching ¥237 billion in the year ended March 31, 2011, representing a gain of 5.6% versus the prior fiscal year. Operating earnings are expected to climb 16.6% to ¥20.5 billion while net income is forecast to climb 20.1% to ¥10.0 billion. Compared to the forecast provided when releasing fiscal first quarter results on Aug. 4, sales were adjusted slightly higher versus ¥231 billion forecast previously, the operating income forecast was the same at ¥20.5 billion, and net income was adjusted downward from ¥11.5 billion. 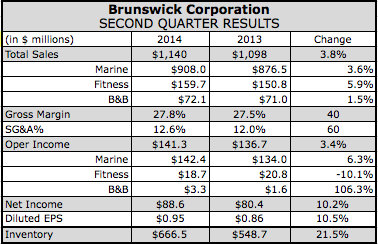